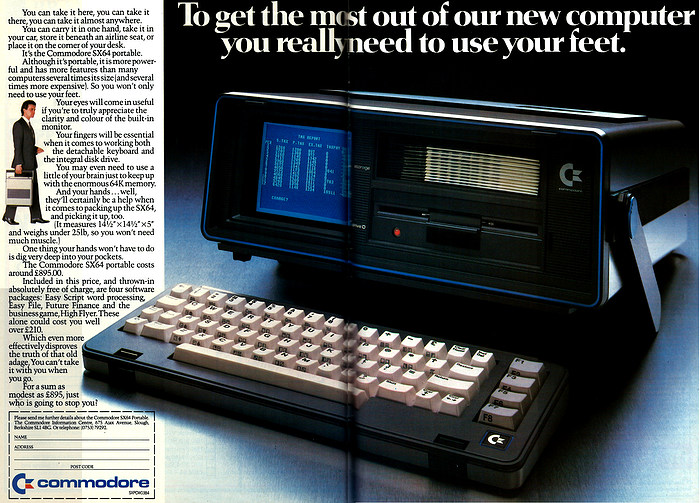 To get the most out of your new computer, you really need to use your feet

Since the Osborne 1, every micro company wanted to have a portable, and every micro company was required to have more-or-less the same photo of someone in a suit lugging said portable" around. And yes - there it is - a dude who who's not only hauling around a 10kg brick whilst pretending it weighs less than a bag of crisps but who looks like he's got a large dagger sticking out of his abdominal region.

Portables hadn't really yet reached actual laptop proportions, and neither had this - a version of the Commodore 64 stuffed in to a case which, like the Osborne, made much of the fact that it could fit under an airline seat, although its dependency on a 240V power supply meant that it couldn't actually be used on the move, even though marketing blurb for the thing frequently showed stuff like someone standing in the middle of a building site with their SX-64 and no power points in sight. It came with a 5" screen, a built-in and legendarily-slow 5.25" 170K 1541 floppy disk drive, Centronics, monitor and cartridge ports and retailed for £895 - about £2,940 in 2020 money. The documentation for the SX-64 was thought to be the standard Commodore 64 manual with parts of the 1541 disk manual "mashed in". As Your Commodore said "As with most Commodore documentation, this is a disaster and in many places is totally inaccurate. Some work has been put into correcting errors that were contained in the original manuals but just as many new mistakes seem to have crept in"[1].

It was first shown during 1983's summer CES in Chicago and was due to go on sale in the UK by Christmas of the same year[2]. At about the same time, Commodore had also signed agreements with Bytec of Canada for the technology in their Hyperion portable, which gave Commodore the rights to produce their own IBM PC-compatible portable, as well as with Intel to second-source the 8088 processor to go in it.

The SX-64 came with four free software packages - a neccesity since Osborne had defined the luggable market with the "One" as coming with a whole heap of free software, but although the machine also came with a joystick port and was claimed by Commodore as being suitable for home use, it didn't actually ship with a cassette interface. Despite the niggles, early demand outstripped supply forcing Commodore to keep flying them over from the US to keep stocks up[3]. Commodore Computing International was clearly sceptical about the SX-64, suspecting that it had been thrown together without much in the way of any actual thought: "it's rather as if [Commodore] said to themselves 'Hey, what if we stick the 1541 disk drive in a box with the computer parts of the 64, then add a little monitor, copy Osborne and put a keyboard in the lid? That'll give us a nice portable without all the bother of that research and development'"