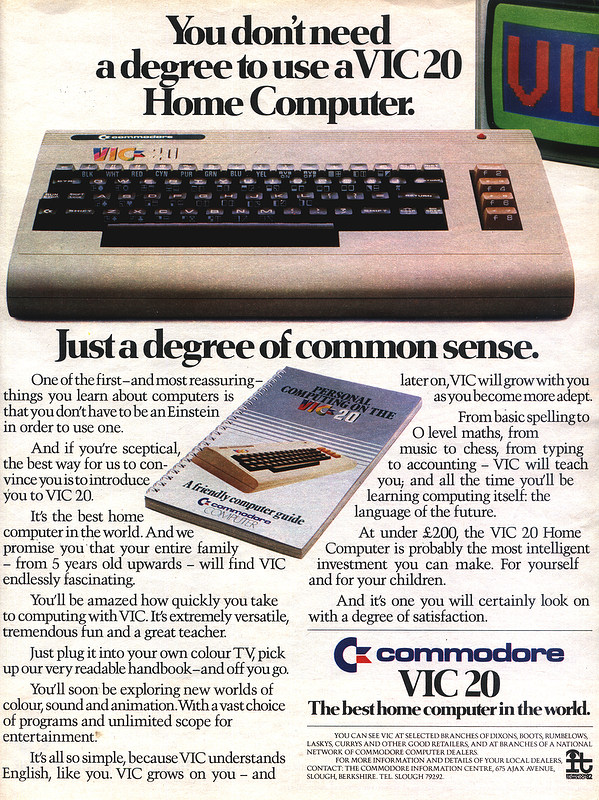 This advert, given that it shows a Mark 1 VIC-20 without the bundled tape drive that soon came long, probably comes from late 1981 - the year that the VIC-20 was launched in the UK. It was priced at £199 (it was Nosher's Christmas present in that year), which would be something like £800 in 2011 prices, and was aimed squarely at the non-technical home market (it was often branded as the "friendly computer"). This approach was mirrored in the outlets the VIC-20 could be bought from - Rumbelows (a radio and TV chain) and Boots the Chemist, as well as more traditional electrical shops like Curry's, or general mega-retailers like K-Mart in the States.

All of this was not especially popuplar with Commodore's established dealers in the US though. In December 1983,a newly set-up "Coordinating Committee for Commodore Lawsuits" contacted dealers to ask them "if they needed any legal help". Commodore hadn't originally been too bothered about this as word from inside the company admitted that as the six largest big outlets accounted for 40% of the group's sales, but this changed somewhat after founder Jack Tramiel "resigned" in January 1984 and new chairman Marshall F. Smith took over the reins. Smith and Chairman Irving Gould embarked on a campaign to sweet-talk analysts and dealers, primarily to mend fences with their embattled dealers but also because the company had received several batterings from Wall Street in the past, including a $5 fall in October 1983 (to $34.25) when the company posted an improvement in first quarter earnings of "only 80%" and a further fall of $5 when Tramiel suddenly departed and the markets assumed a boardroom rift. Gould said "this time, we'll try to do things properly the way they should have been done" and Smith admitted "we need two channels of distribution - mass merchandising and a strong dealer organisation"[1].