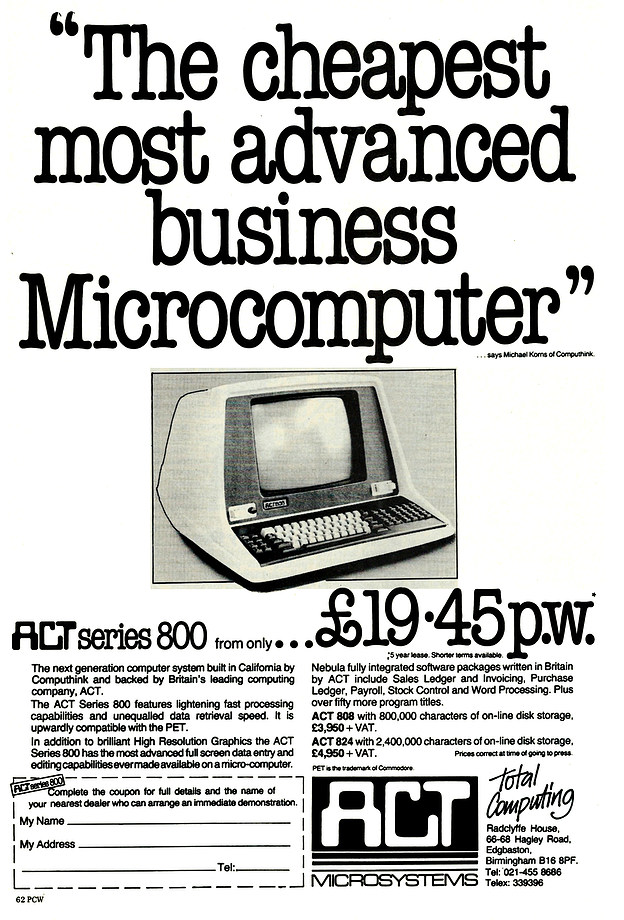 The cheapest most advanced business Microcomputer

Marketed as the ACT Series 800 and built by Computhink of California, where it was known as the Minimax, the 800 was the company's first micro and came some 15 years after ACT's 1965 start as a computer time-share-renting bureau[1]. It had been sourced and imported by Julian Allason of PETsoft and was chosen for its user-friendliness, minicomputer-like features and graphics which included the ability to do non-standard PETSCII graphics. For this reason it was considered as a "relatively easy" upgrade from the PET, which at the time was the UK's most popular micro. The Basic was similar, it could do the same graphics and in theory only Peeks and Pokes needed to be changed - something which could be required even when moving from one PET model to another. However, it was not entirely straightforward, as the 800's screen was not memory-mapped like the PET's was, and putting something on the screen required three pokes per character - one each for x and y and one for the thing actually on the screen. Thomas Turnbull, who worked with Allason to convert PET software for the 800 concluded that "This mostly meant that PET games [written in machine code] did not transfer very well but all Basic-written ones did"[2].

Allason found fame in the 1970s as a photographer and was also well-known in Chelsea for driving around in his "psychedelic mini". He founded MicroComputer Printout in 1979 as a response to a shortage of software for Commodore's PET, with the magazine becoming a forum through which readers could exchange their own software. This was followed with the creation of PETsoft, which was one of the UK's first domestic computer companies[3].

ACT also seemed to some commentators to herald the "era of professional programs" when its PET software subsidiary, known then as PETACT, launched its first business package in October 1979. "Complete with detailed documentation" and requiring dealer attendance on a one-day course before it could be sold, the software was considered high quality and good value, retailing for around £175 - about £980 in 2021[5].