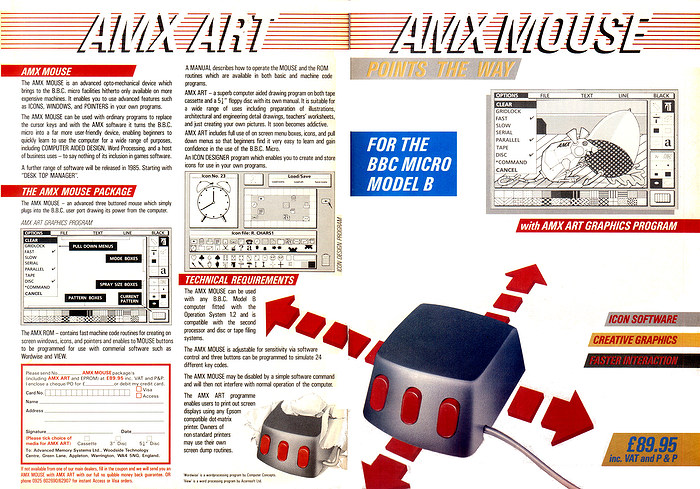 Pre-dating the launch of home computers that came with and were optimised for mice (such as the Commodore Amiga and Atari ST), there was a phase of "retro fitting" the fashionable new devices to sometimes quite old machines - in this case the venerable 1981-released BBC Micro, otherwise known as the Acorn Proton. Apple's failed Lisa was the first mass-market computer to offer the whole "WIMP" (Windows, Icons, Menus, Pointer) experience, which was based on that developed on the Xerox Alto back in 1973 (and elsewhere even before that), but it was the Macintosh that truly popularised it. However, these were high-end and expensive machines, so there was a market to add more affordable mice to home micros, hence this - the AMX Mouse from Advance Memory Systems. The AMX mouse, credited as being the first mouse launched for a home computer in the UK when it debuted at the Acorn User Exhibition in London's Olympia in August 1984[1], was reviewed in January 1985's Personal Computer News, with Francis Jago concluding that it "is the leading contender for the title of Peripheral of the Year. In all fields except perhaps cosmetics, the device is superb. The software on ROM makes programming it extremely easy, even for the novice. At £89.95 it is a bargain"[2].

The future of the keyboard and voice recognition

The advent of the computer mouse had, in some circles at least, thrown into sharp relief something that was said to be a real barrier to the increase of personal computer use - the keyboard - which was perhaps a reasonable position to take given that many potential users had no desire to learn how to type. Back in 1982, Radio Shack's VP of computer merchandising Jon Shirley reckoned that "there are a number of applications where you'd like to get rid of the keyboard, but it's still a pretty efficient device for doing a number of things" before continuing with the prediction that "until you get to a high level of voice recognition, you're going to have keyboards". Voice recognition has perhaps now reached that "high level" in the second decade of the 21st Century, some 30-odd years later, with the rise of Alexa, Cortana and Siri, although prophetically Shirley also suggested that the inclusion of voice recognition might lead people to assume that computers were now somehow intelligent. Bob Katzive of Gnostic Concepts thought that this could actually be a bad thing, as it might mean people would come to fear the very machines that are supposed to help. But perhaps Commodore's famous marketing vice-president Kit Spencer had the future right when he said in 1982 that keyboards would remain a key item for "many years", largely because he "wouldn't want to sit in an office where there are 15 people talking into their machines"[6].