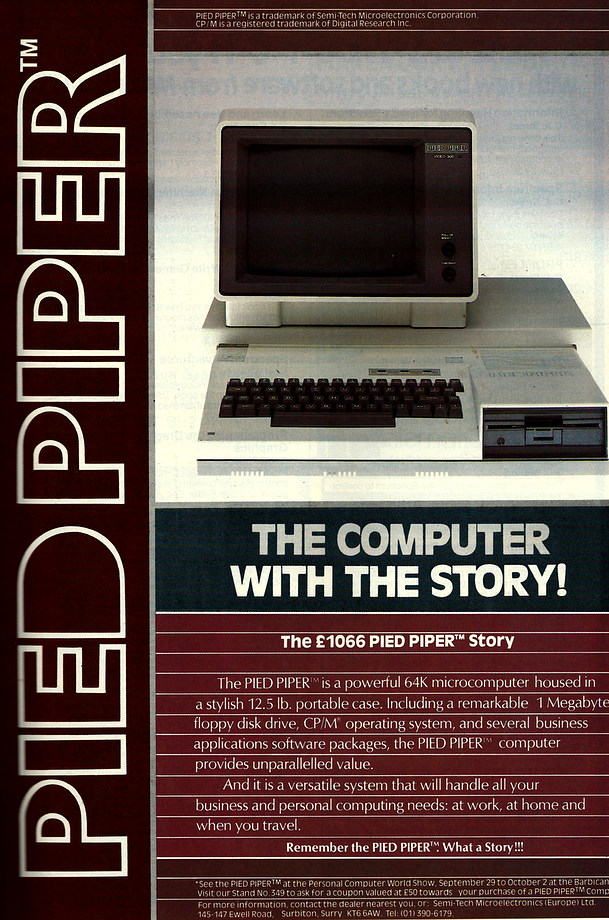 The computer with the story!

It may have had a story to tell, but it seems to be a fairly conventional one, being as it was a 64K CP/M luggable, complete with a built-in carry handle. On the upside, it did have a particularly large 1MB floppy disk drive.

The Semi-Tech Pied Piper was designed by Semi-Tech Microelectronics Corporation of Toronto, Canada, manufactured in Hong Kong and was launched at the 1983 NCC computer show in California[1]. It retailed for £1,066, or about £3,670 in 2021 money, and in common with several otherwise-indentically-specced CP/M portables of the era shipped with a bundle of free software in an attempt to achieve differentiation, in this case with the Perfect Software suite. In his Personal Computer World review, Dick Pountain concluded that the Pied Piper Communicator was a "solid, workmanlike CP/M computer which has the advantage of being very easily transportable. It also has at least twice as much disk space as its competitors, on a single drive. The supplied software is of high quality and covers most of the functions the average user would require"[2]. What a story!!!

Semi-tech re-appeared during 1988 when it ran a sub-optimal advertising campaign for its new 286-based Toshiba-portable-like STM 5500 in Personal Computer World. It seemed to Semi-tech that Personal Computer World's readers simply weren't interested in its machine, however Guy Kewney writing in January 1989's Newsprint suggested that this could be something to do with the fact that the adverts failed to mention any prices or suppliers, but perhaps more significantly was that they even failed to mention a phone number where people could actually phone up to, maybe, buy the thing. It seemed that Semi-tech had pulled something similar with its earlier machine, as "after the [Pied Piper] hype, [Semi-tech] proved hard to find too, and a couple of hundred were all that sold"[3].