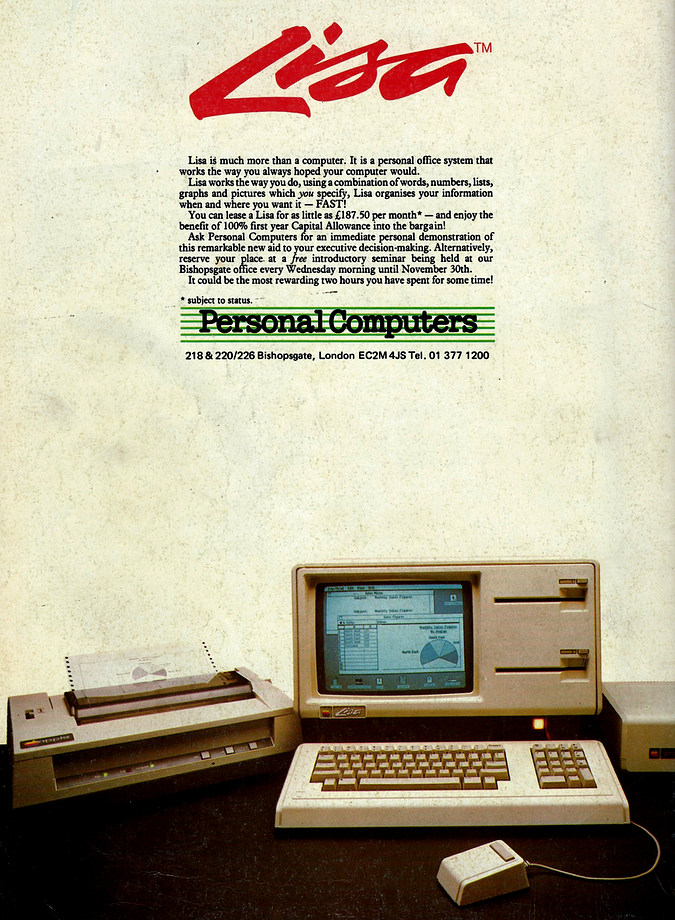 Featured in this back-of-the magazine third-party advert, the ill-fated Lisa was the first mass-market computer to offer the full "WIMP" - Windows, Icons, Mouse, Pointer - experience. Whilst it had taken an alleged 300 man-years to develop the software (or about four years in real time), compared to 25 man-years for the Apple III and only two for the original Apple II, the various concepts that the Lisa helped make mainstream weren't actually new, having been heavily influenced by work done at Xerox's Palo Alto Research Center on the Dynabook concept, developed in the late 1960s and early 1970s[1], and the Xerox Star. That influence was quite direct - Xerox's Larry Tesler had been one of the engineers who had first shown the Star to Steve Jobs, before being poached, along with several other Xerox employees, by Apple and not surprisingly becoming a key member of the $50 million, three-year-long Lisa project, as well as heading up development of the important Application Developer's Toolkit[2]. The Xerox Star was still considered to be the nearest competitor to the Lisa, but at £15,000 for the system plus £50,000 for the Ethernet network you needed to use it (a total of £224,000 in 2022 money) it made the £8,000-odd (£27,500) for the Lisa look like a bargain[3].

Even Commodore's Jack Tramiel had a dig at Lisa's high price saying at the 1983 Hanover Fair "We like Lisa, but it's just a tiny bit too pricey". Tramiel claimed that Commodore was going "to produce a machine with all the features of Lisa for $2000 to $3000 by the end of the year"[4] although Tramiel was understandably vague about the exact details of the rumoured "Mouse Cursor" machine[5] which would become the Atari ST. But at least the Lisa could be rented for "only" £184 per month - about £630 in 2022, or around the same as a £100K mortgage. With those sorts of prices on offer, perhaps it's no wonder that the feeling with Xerox was reported to have been "we blew it".

At about the same time as this advert, Apple UK announced a significant price drop, following a reduction in the US, although this required the purchasing of a software package containing six program whether you wanted them or not. The price had been reduced by nearly 20% and was down to £6,500 - about £22,400 in 2022 - which included the six programs "for the price of four". Apple also reported that "about 200 machines [have been] installed with large, national-account types of business" out of around 2,000 that were thought to have been sold worldwide up to that point. The enforcing of software was said to have been down to the lack of third-party Lisa software in the UK, whereas allowing North American buyers to go free range "made much more sense in the US", at least according to Apple UK's general manager Mike Spring "because of the much larger market for third-party software"[10]. 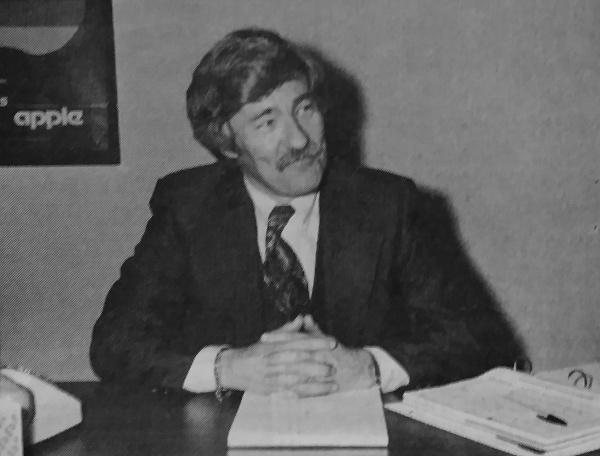 By 1984, the Lisa's price had been dropped down to a mere £4,000, or about £13,100 in 2022 and by the start of 1985 it had renamed it as the Macintosh XL, in order to end confusion about its Mac compatibility[12]. Not long afterwards in May it was announced that it was being dropped completely in favour of the regular Macintosh, albeit a version of the Mac that finally had some extra memory - 512K - and a bigger 20Mb hard disk. Apple was feeling the heat from Atari's 520ST and other GEM-based micros[13].