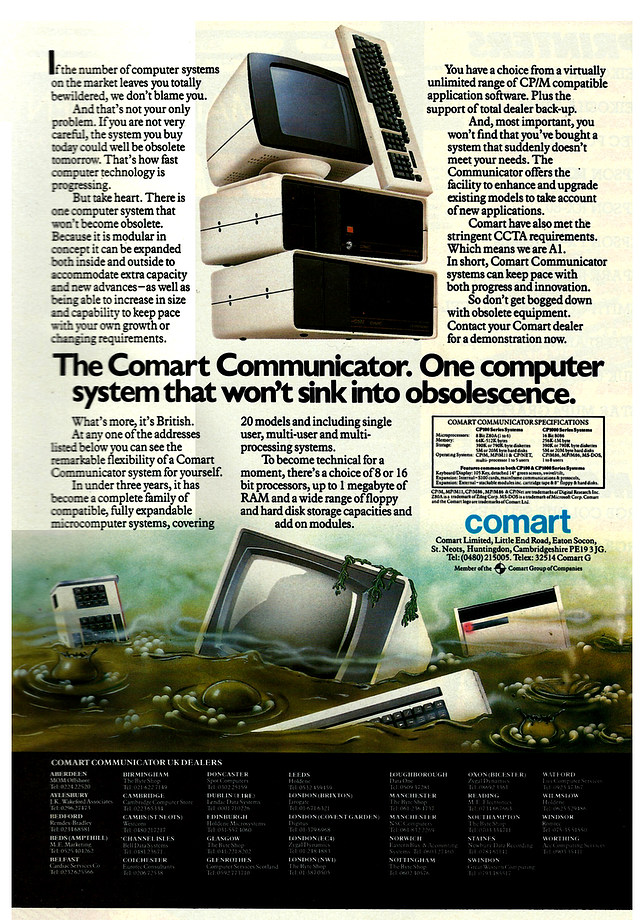 The Comart Communicator: One computer system that won't sink in to obsolescence

If there was one undercurrent that ran through microcomputer advertising throughout this era, it's that of a simmering paranoia about being "left behind". This was, of course, understandable as things were rapidly changing, not least in terms of the companies that appeared and then disappeared - sometimes only months - later. Certain aspects of micros were well established, even across the hundreds of manufacturers, for instance there were comparatively few choices of processor: MOS 6502, Intel 8080 or 8088, Zilog Z80 or Motorola 6800 and even fewer choices of bus: S100, SS50 or "other", but even this didn't help as every manufacturer's memory map or harware addressing or screen memory or version of BASIC or colour support or storage interface protocol or disk format would be different - even amongst different micros in their own range. Buying in to a computer was therefore a risk, if the builder wasn't going to be around a year later to support it or if the user-base wasn't big enough for third-parties to build stuff for it.

Probably about the only "standard" that was cross-micro-compatible early on was that of CP/M. Gary Kildall's operating system was properly portable, so at least if your supplier went bust, you could actually run your software on someone else's machine. The same couldn't be said for much else until the arrival of the IBM PC/MS-DOS hegemony at the end of 1981 (or 1982 for the UK) or MSX, which attempted to work around the problem by mandating the exact same, rather dull, specification of CPU, video and sound on any manufacturer wanting to build an MSX computer.

Comart the company started out as a reseller of North Star and Cromemco computers in 1977, with founder David Broad being considered as one of the first people to ever sell US computers in the UK. In 1980, Broad expanded by taking over the ailing Byte Shop, which was in receivership, for £300,000 (£1,482,900 in 2021). After the Byte Shop take-over, Comart announced "business as usual" and that its existing Comart franchises would remain unaffected and would continue to be run by John Lamb. That was except for the SWTPC contract, which was dropped as that company was moving towards minicomputers, and Ohio Scientific, which had been problematic and which had already seen its entire stock of machines and parts sold off by the receiver. There was also a rumour that the Commodore PET was to be dropped, but this as denied by Nottingham Byte Shop manager John Braga. Braga, who was responsible for integrating the two franchises, said "Apart from the money PET makes, we sell so much PET software that we wouldn't like to consider dropping it, even if it caused much more difficulty than it does now"[1].

Comart seemed to be more approachable than the average computer company and actually listened to constructive criticism of its products - a refreshing change from, say, Apple's "you're holding it wrong" approach to customer feedback[2]. Responding to a review of the company's CP-100 machine in the June 1981 issue of Practical Computing, marketing head David Slinn revealed that the company had fixed the issues identified in what was otherwise a favourable review and had rolled them into the final design for its newer CP-500 model, as well as upgrading the CP-100 machine and all the other Communicator micros in its range[3].

Anyway, this advert from Comart treads a familiar path. So much so, that it's almost an exact copy of Commodore's "swamp" advert from early 1981.