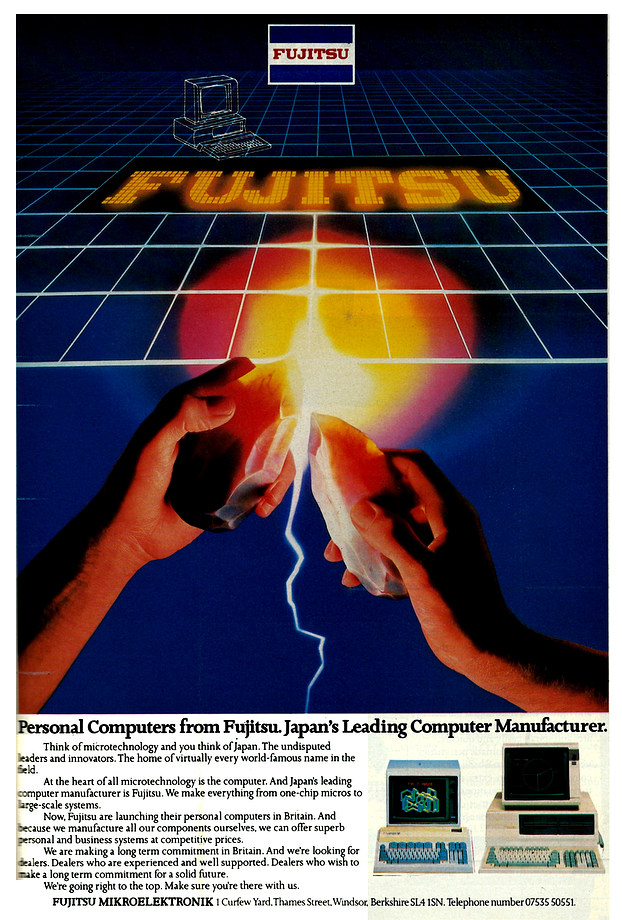 Founded in 1923 as a joint venture between Furukawa Electric Co. Limited and Seimens of Germany, originally as a telecommunications company[1], Fujitsu was part of the much-feared Japanese invasion of the US and UK micro market that never really happened, at least not in the desktop sense. Japanese companies like Kyocera, NEC and Epson did ended up mostly owning the laptop/hand-held part of the market, where perhaps the famous Japanese penchant for miniaturisation was more relevant. Personal Computer World commented "the portable computer market appears to be the first segment of the personal computer market in which the Japanese will assume a prominent position"[2]

Fujitsu did however make a stake in the UK, and ended up working closely with ICL - the former monolith that had been part of the group formed from Elliott, English Electric, Marconi and LEO - which Fujitsu ultimately wholly acquired in 1998 and renamed as Fujitsu Services Holding PLC in 2002[3]. The old German connection seems to have remained, with the bridgehead company being named Fujitsu Mikroelektronik. This was based in Windsor, not too far away from Bracknell, home of ICL.

The worry of a Japanese invasion had been very real, as many people could still remember the demise of the UK's domestic motor cycle, camera, ship building and television industries at the hands of cheaper (and better-quality) Japanese imports. Even as early as November 1982, the British Micro-computer Manufacturers Group (BMMG) had written a letter to Maggie Thatcher warning her that "drastic measures are needed against the acid rain of unfair foreign competition". Quite why it was unfair was not made clear, although it was known that Japanese banks worked much more closely with industry and lent at much lower interest rates.

The BBMG wanted nothing less than a total ban on imports for a year, as well as the exclusion of foreign micro manufacturers from the Government-approved list, pointing out that only ten companies on this CCTA shortlist of 29 were British companies. Much like "terrorism" is currently used as a hot-button topic to push through unwanted legislation, the mention that not having a British micro industry might be bad for "defence" - the Falklands and the Cold War being very current at the time - was also mentioned. Not everyone agreed, with Torch's Martin Vlieland-Boddy pointing out that most UK companies got their components from importers anyway and that Torch seemed to manage OK, selling 50% of its products abroad. Clive Sinclair also disagreed, apart from a point on import duties, which were set such that whole systems built outside the EEC (EU) could be imported with a 5%-8% levy but component imports faced 17%. Clive was more in favour of the idea of Free Ports, stating in a letter to The Times published on the 3rd February 1983 that a free port in Dundee (where Timex was already building Sinclair's machines) could generate "hundreds, possibly over 1,000 new jobs" for Sinclair alone[4], with the idea being that Sinclair could import components without any duty paid provided that the assembled machines were all exported, making Sinclair much more able to compete fairly against "foreign competitors". Disappointingly, but perhaps unsurprisingly, the Customs and Excise Board could "not see that free ports would serve any useful purpose"[5]. Uncle Clive went further in a written statement when he said "We do not believe that the BMMG package represents the most helpful way forward. Essentially it seeks to solve problems - caused by the regulations - with new regulations. It would be more in keeping with the spirit of the present government to dismantle existing controls which inhibit initiative and growth"[6].

The BMMG was also asking for £250 million (£860 million in 2021) for R&D, at least some of which Vlieland-Boddy thought should go on promoting British products abroad, saying "The whole British stand at the National Computing Conference in Houston [in June 1982] was only one tenth the size of the Motorola stand". There was also the problem of manufacturing scale in the UK, with old-fashion methods still be prevalent and not helping competitiveness. "There must be a reason why BBMG members think they can't compete. Lots of companies in the Cambridge area would still be able to compete even if prices went down 30%. UK companies have got to be realistic about what the market place is doing. The person who pays the bill of protectionism is the consumer". Sinclair was certainly one of those Cambridge-based companies with "Uncle" Clive Marles Sinclair, who had been recently knighted in the Queen's Birthday Honours in June 1983, saying that the secret of success was pitching yourself accurately in the market - something that not every micro company managed to do - and that there was no particular reason why the UK couldn't produce in volume. "Sinclair is the largest computer manufacture in the world in terms of volume. If Sinclair can do it, why can't the rest of the BMMG"[7]. Sinclair, having distanced itself from the Thatcher letter, resigned from the BBMG shortly afterwards.

There was a certain amount of schadenfreude to be had in the spring of 1985 when MSX manufacturer Casio decided to slash the price of its PV-7 model, which it had been selling since October 1984, from its previous £99 (£310 in 2021) down to £50, at least in some of the discount retailers in the Akihabara electronics bazaar in Tokyo. This forced several other manufacturers to follow suit, not least of which was Nintendo, which dropped the price of its game machine down to a ludicrous £16 (£50). Casio had long been famous for bringing cheap goods to the public, and the other MSX manufacturers like Sony were feeling threatened, especially as Casio was also dabbling with Sinclair-like mail ordering, something which was new to Japan[8].