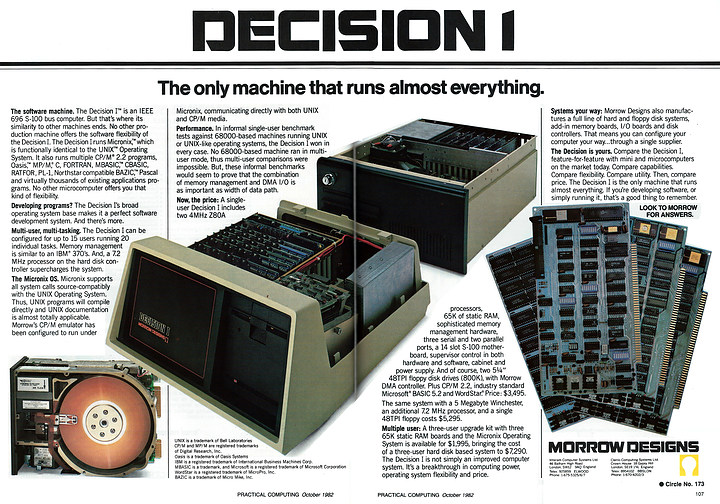 Decision 1 - the only machine that runs almost everything

The Decision 1 from Morrow Designs appeared to be at something of a crossroads, taking with it the S100 bus and to some extent the 8-bit Z80A processor, both from the 1970s, into the 68000-based 1980s world of Unix, the operating system that had also been around since the 1970s but which was only now starting to make inroads into the mainstream consciousness.

Claiming that its 4MHz processor could take on the 16/32-bit 68000, which was running at around 12MHz by 1982, might be a bit of a stretch, but with some memory management and additional 65K cards for each additional user, plus the power of "informal single-user benchmarks" - marketing double-speak for "not actually reproducible" - the Decision 1 apparently beat a bunch of 68000 machines running Unix or Unix-like operating systems. With its own version of Unix - Micronix - plus CP/M compatibility via emulation and even some Northstar compatibility, at least the claim that it could run almost everything was probably not far off the mark. 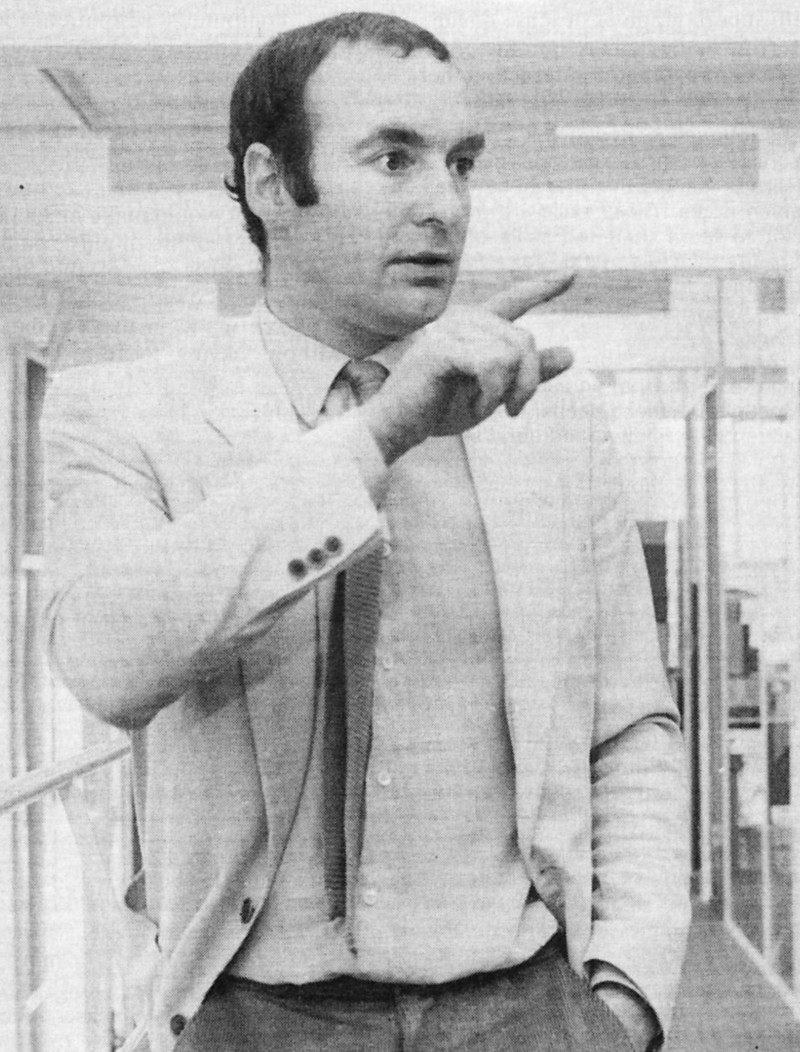 Chris Curry of Acorn offers a version of Unix for Acorn's "Gluon" 16-bit add-on system. © Practical Computing, October 1982The Decision 1's support for multiple operating systems acknowleged another crossroads, in the UK at least, as 1982 marked the point where the future of 16-bit systems in the wider business market was still seen as an open two-horse race between CP/M - the now-vintage operating system from the 1970s which was trying to keep up with more-modern versions such as CP/M-86, and Unix - an operating system which could actually trace its roots back to Multics of the mid 1960s and which was written by hard-core nerds for use only by other hard-core nerds. Future 68000-based operating systems such as AmigaDOS, Atari's TOS for the ST and Apple's MacOS were at this point were all glints in the eye, whilst Microsoft's hegemony of MS-DOS and later Windows was barely on the horizon and was not yet the manifest destiny of the PC industry. Meanwhile, Unix was slowly coming out of its academic shadow and was being talked about in the press as a serious contender as the new 16-bit standard with even super-cautious Acorn offering a version of Unix for its NatSemi 16032-based 16-bit "Gluon" add-on for the BBC Micro[1].

What was already a given though was that the era of incompatible machines, where software written on brand X's micro had absolutely no chance of even vaguely running on brand Y's, was at an end, and whatever OS was going to win would have to finally remove all the inconsistencies between different manufacturers' machines. The problem for both CP/M and Unix was that the users weren't really bothered, as long as the software they bought ran on the machine they had and developers were still writing software for their chosen OS. Here CP/M had the lead in terms of its more user-friendly software, as Unix was notorious for its unforgiving environment. The whole thing was academic though, as whilst the two thought they were in with a shout, IBM was plodding on with its 5150 PC, which was already out there with an operating system called PC-DOS, which was crucially - thanks to Microsoft's insistence on a non-exclusive licence for its software - available off-the-shelf as MS-DOS. As the IBM PC gained ground - and people faithfully bought it because, well, it was IBM - it dragged MS-DOS along with it and before long IBM's PC, and all the clones that came along to copy it, were all running Microsoft's software. As reported in Practical Computings October 1982 editorial on the subject, Adam Osborne of Osborne One fame said "You don't have to be best. You don't even have to be good. You just have to be first"[2].

By the summer of 1983, Digital Research had brought out a raft of updates to its venerable CP/M, including a long-awaited update to the original 8-bit version, in the guise of 3.0, by then renamed as CP/M Plus. There was also a version for 68000 users, known as CP/M-68K, an updated version for 16-bit users - CP/M-86 - and even a graphics version - CP/M Graphics, based upon the ANSI/ISO GSK Graphics Kernal Subsystem. All of this proliferation was a rear-guard attempt by Digital Research to reassure its dealers that CP/M itself was still a viable choice, a process which included inviting 500 of its independent software vendors to the Café Royale in London on the 21st April so it could hammer the point home. During this event, a DR spokesperson stated that CP/M, which at that time had over 350,000 installations across more than 500 different manufacturers' computers, was "not dead, but revitalised and prepared to challenge MS-DOS, Unix or any other contender in the race to be the standard operating system for 16-bit processors"[3].

Inspite of, or perhaps because of, the variety of versions available, CP/M fizzled away, but Digital Research remained as a contender, at least for a while, with its DR-DOS range of MS-DOS-compatible operating systems, sometimes said to be more feature-complete than MS-DOS itself. However, both MS-DOS and DR-DOS faded away once version 3 of Microsoft's Windows - the first version that was actually really usable - took hold of and came to dominate the PC market, a situation that remains today, despite the slowly-decreasing relevance of actual PCs.

Perhaps Unix had the last laugh though, as although it itself didn't come to win the 16-bit OS war (or the 32- or 64-bit war that followed), it lived on in servers, high-end workstations and specialist systems running Unixes like SCO, AIX, ICL's DRS-NX or Solaris. Even Apple's MacOS system came to be derived from BSD, itself a Unix breakaway. In 1991 it spawned a Unix-a-like OS called Linux[4], which, thanks to being free (in both the monetary and open-source-software senses) and the fact that it built upon the earlier GNU project, which meant it could run lots of existing tools and utilities, came to first dominate the server market and then perhaps, in modified form as the kernel of a mobile OS called Android, the world.