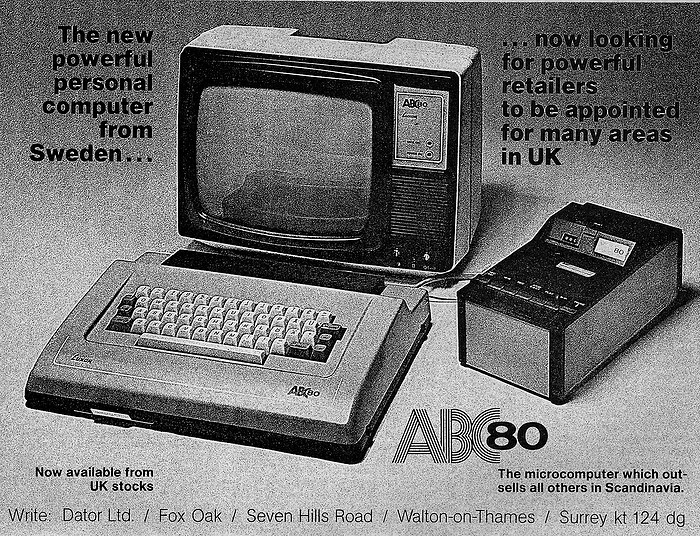 Whilst it would be easy to think of the personal computer revolution as being a purely US and British thing (although these were by far the largest and most active markets), there were home-grown computers being built elsewhere in Europe, including this - the ABC 80 - built by Luxor, the Northern-European electrical chain and manufacturer of televisions and Hi-Fi. It was designed by Dataindustruir AB, which was also manufacturer of the compatible Databoard 4680, for which there was already a large range of peripherals available.

The ABC 80 comprised three units - a standard keyboard which also contained the computer, a 12" monochrome TV unit and a cassette. The computer ran a Z80A at 3.5MHz, 16K (up to 40K) RAM and 16K ROM and ran its own proprietary "ABC" bus[1] as well as using its own BASIC, rather than the de-facto standard of Microsoft BASIC. It used TI's Viewdata chip as its character generator, so was compatible with Prestel, Ceefax and other Viewdata services (and even came fitted with a standard European V24 phone plug). According to the advert, it was the most popular micro in Sweden. It retailed for £790 + VAT, or around £4,480 in 2021, which put it up against the PET, Apple II, TRS-80, Sharp's MZ-80K and Exidy's Sorcerer.

Sue Eisenbach of Personal Computer World concluded her review of the ABC 80 somewhat ambiguously, stating that it was near the top of the price range in its market and that there wasn't much English-language software available for it, but that if vendor lock-in was ignored (as it didn't use an industry-standard bus like the prevalent S100), the system did offer a wide range of add-on boards - in fact the review[2] listed nineteen different boards, disc units or software packages, including a dual 8" floppy disc unit for a mere £3,180, or £15,700 in 2021.