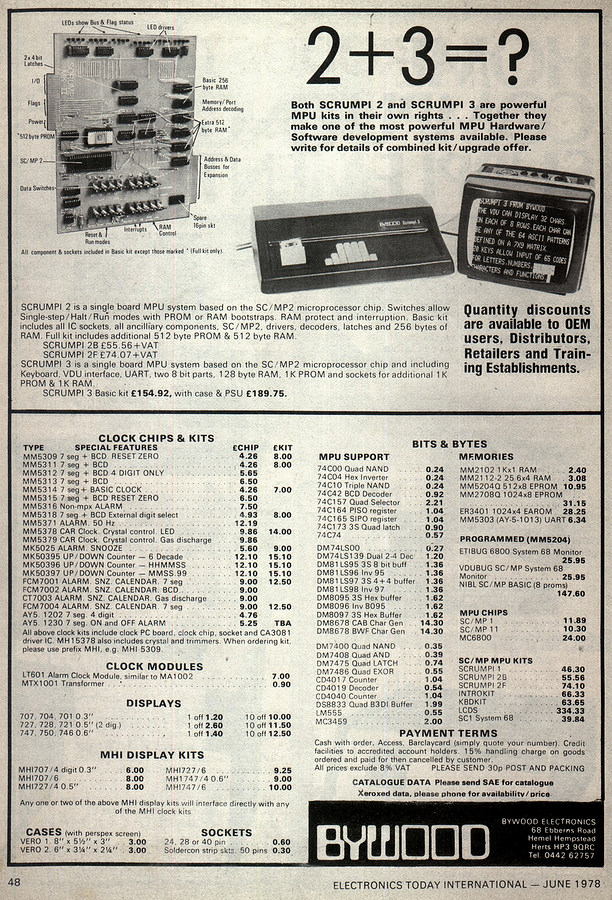 Had it not been for one of The Register's great articles on one of the forgotten pioneers of the early computer scene, this advert from Bywood, a company founded in Hemel Hempstead, Hertfordshire, by John Miller-Kirkpatrick and which produced the UK's first kit computer over a year before Sinclair/Science of Cambridge's MK14 and even longer before Acorn's Microcomputer/System 1, might have been overlooked. This would have been a shame as the article suggests that Bywood might well have gone on to beat Sinclair at his own game had Miller-Kirkpatrick not died at the young age of 32, so it's worth an inclusion for both historical completeness and a glimpse of what might have been.

The machine itself was relatively rudimentary, running National Semiconductors' SC/MP2 "Scamp" with the full kit including 512 byte PROM and 512 byte RAM (That's just enough memory to hold the first part of this entry up to about the word "Acorn"). It was however (in kit form at least) very cheap, with the Scrumpi 1 clocking in at just £60 (around £360 in 2021 money). The advert also references lots of Bywood's other product lines, which included not only various electronics components but also things like alarm clock modules and Bywood's first-ever computer, the SC1 System 68, available for just £43 (£260).

Elsewhere, in the June 1978 issue of Electronics Today international, the Scrumpi 3's price was compared to some of the other machines that were on the market, including the successful early UK computer the Nascom 1 (which, under the section "extras required to get system going", has the entry "soldering iron" next to it). Prices ranged from £145 (£880) for MOS Technology (now Commodore's) KIM-1 to a whopping £995 (£6,040) for the Apple II, beaten only in expense by Research Machines' 380Z at £1,063 (£6,450). The Scrumpi 3 (the version which included a case, PSU and a video interface) was well down at the affordable end of the spectrum coming in at £189.75 (£1,150).