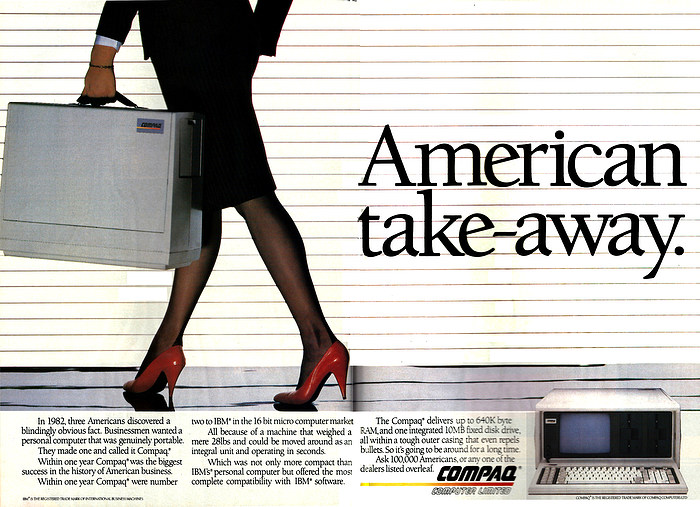 Compaq, founded by three ex-Texas Instruments senior managers, became wildly successful in its early years, becoming the fastest company ever to achieve $1 billion sales, which it achieved in 1987. It did this in four years since the launch of the original Compaq, beating Commodore - the first computer company to reach $1 billion - by a year or two, at least if you count from the time Commodore launched the PET, rather than its founding as a typewriter repair company in the 1950s. It wasn't all plain sailing though, as the company was threatened by IBM's intention to control the whole PC market - where it even seemed to be taking on Microsoft's Windows, with the release of its own Topview - as well as by its price cuts, which were already challenging Compaq by the end of 1982, even though by this point the clone upstart was already number 3 in the market. Louise Keyhoe, West Coast correspondant for the Financial Times, put it nicely when she suggested that Compaq was playing a dangerous game because it was "dancing with the gorilla, and when you dance with a gorilla you don't get to choose when to stop". She also reckoned that the letters IBM were "synonymous with FUD: Fear, Uncertainty and Doubt"[2].

Compaq was considered as the most successful manufacture of IBM compatibles, but was also lucky as IBM was struggling with its progeny. Problems with fulfilling deliveries meant that Big Blue's machines were hard to get hold of and IBM's usual glacial pace of development meant that machines like Compaq's Deskpro 286 were up to 30% faster than IBM's latest AT, despite having the same processor. This was the era of clone machines shipping with "turbo" buttons that could be turned off to slow them down "for full AT compatibility"[3].

The first person to be credited with understanding that whatever IBM did would become a standard was Compaq's president Rod Canion, formerly of Texas Instruments, where he had first-hand experience of IBM's standard-setting competition. IBM for its part hadn't been too sure about its original PC, as it only expected to sell some 250,000 units and certainly didn't imagine that anyone would want to clone it. By 1988 though there were thought to be over 5 million actual IBM PCs plus another 20 million clones in the world - that's not far off the combined total of all the microcomputers that had ever gone before. Although Canion had realised that it would set the standard, he didn't suspect that it would become as popular as it did.

Unlike Eagle Computers of Los Gatos, which had reverse-engineered IBM's BIOS - the part of the IBM PC that controlled access to the hardware - and which had been rewarded with a cease-and-desist lawsuit from Big Blue for its efforts, Compaq had started with a "clean room" approach to create its BIOS copy, which meant it was on safer legal ground. As well as Compaq, two other companies that would come to dominate the clone BIOS market - Phoenix Technologies and Award Software - released their own clean-room BIOSes, which mean that now anyone could licence a legal copy and create a fully-fledged IBM compatible[4]. This set the stage for the near-dominance of the IBM PC architecture for almost all of the next 30 years.

Compaq didn't survive quite that long, as the company was ultimately absorbed by Hewlett-Packard after struggling through the dot-com bubble of the early 2000s.