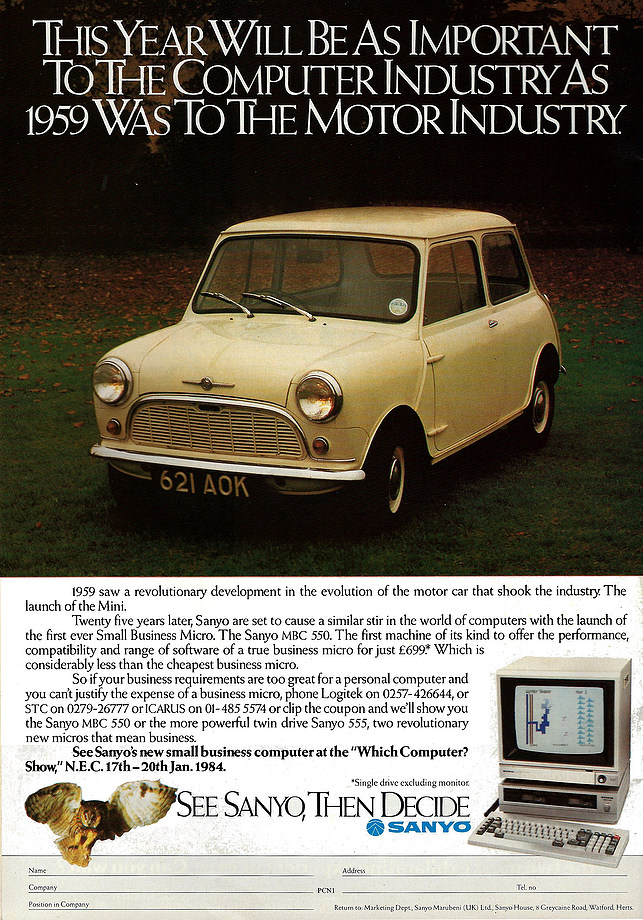 It's perhaps stretching it a bit to assert that the launch of another IBM clone, albeit one of the first "legitimate" clones[1], was as significant as the 1959 launch of Alec Issigonis's iconic car, but at least this advert gets in a nice photo of an original Mini, even if it is one that only seems to have a back seat in it.

There is a nice bit of self-reference in the choice of registration plate for the car as, according to oldcomputers.com, a company called A-OK wrote the modified version of MS-DOS which the machine ran. The Sanyo machine was also very cheap, retailing at £699 for the basic model without a monitor - that's around £2,300 in 2021 - and even came with a reasonable bundle of free software. However, it was also just about the only IBM clone that clocked in as being slower than IBM's own pedestrian 5510.

Sanyo was clearly hedging its bets with this machine, as it was also a member of the Microsoft-sponsored and mostly-Japanese MSX Consortium, which had hoped to take over the home and business market with its standardised MSX-specced micros. Despite fears of a Japanese invasion since the late 1970s, MSX failed to make much of an impact as by the time it launched, it was too long-in-the-tooth and the IBM was on its way to dominating everything.