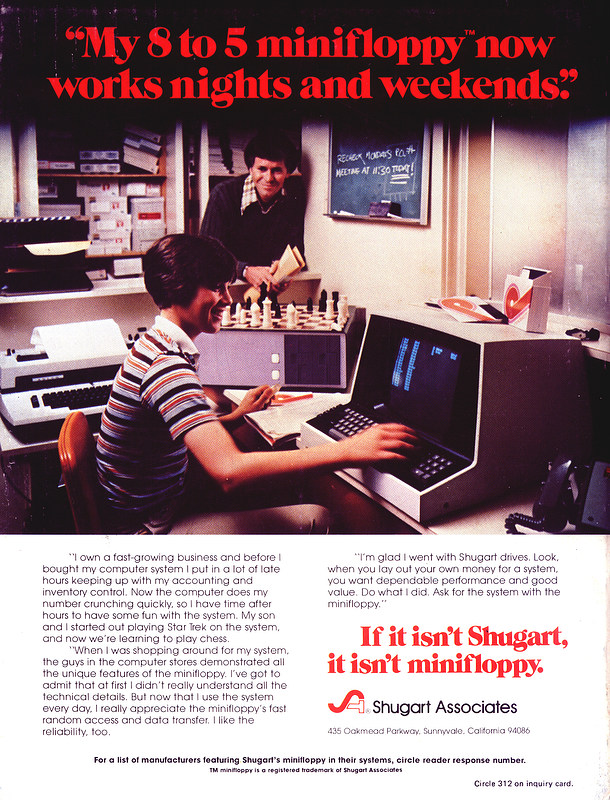 If it isn't Shugart, it isn't Minifloppy

The apocryphal story tells of a customer who complained that the 8" floppy drives of the day were just too big for the smaller "personal computers" that had been appearing since 1976. The ideal size was said to have been a table napkin, and the conversation allegedly gave rise to the 5¼" "minifloppy" floppy-disk drive. Storage is still a big deal today, but only really in terms of whole systems and in terms of cloud scale - the drives themselves are utterly commodotised. However, for a while during the late/mid 1970s, it was not uncommon to see adverts just for disk units of one sort of another. They were, after all, a significant improvement over the cassette tape that many home and even business systems had been using, even though the price of them was often higher than that of the system they were attached to.

Shugart dominated the floppy drive market for much of the 1970s, but the founder - Alan Shugart - left the company in 1979 to found Shugart Technology, which was swiftly renamed Seagate Technology after a legal challenge from Xerox, which had bought the original Shugart company in 1977. 5¼" drives went through many evolutions between 1978 and their eventual replacement by 3½" units during the mid/late 1980s - although many companies used all sorts of non-standard formatting conventions, generally the single-sided 40-track original could store around 180K, DSDD (double-sided, double-density) floppies could store 360K per side and the pinnacle HD floppy could store 1.2MB in total.