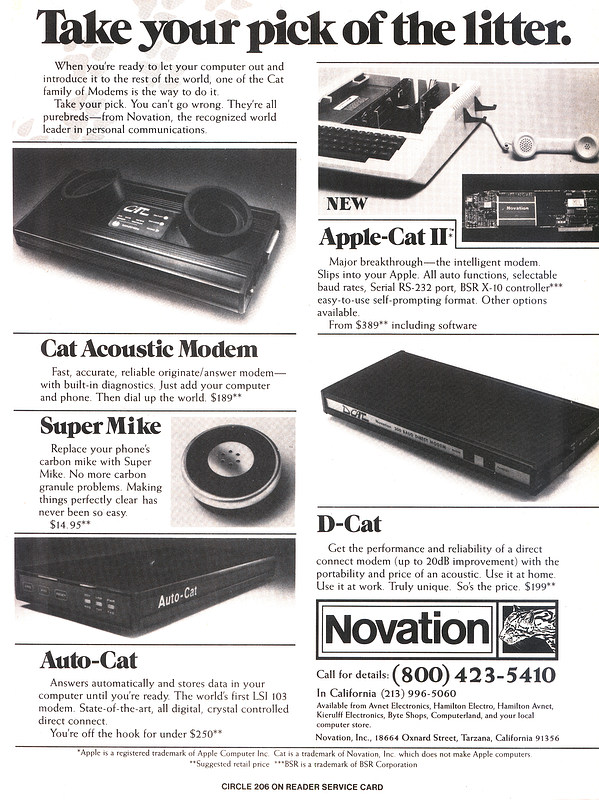 "Take Your Pick of the Litter - Novation"

Up until the back end of the 1990s, the Modem was the only (affordable) way that people at home could connect to the Internet, and it had that way since the first home computers started arriving on the scene in the mid 1970s. This advert is for Novation, a company whose product lines mostly had things with the word "cat" in them. It includes the Apple Cat II - an internal modem fitted to an Apple II, which cost $389 (about £1,100 in 2011 money), as well as the "Cat Acoustic" modem for $189, a more affordable £550 in 2011 terms. It's this sort of modem that was seen in the film War Games, when Matthew Broderick dials in to hack the school's computer (according to Wikipeda, although "acoustic couplers" were obsolete by then, viewers would more readily understand what was happening). The speeds that acoustic modems would work were in the order of 150-300 baud (roughly bits per second) - that's nearly 7,000-times slower than even 1mbps broadband. They remained popular for longer than they should due mostly to the telecom incumbent's (e.g. Bell in the US and the GPO in the UK) stranglehold over what devices could be connected to their networks.