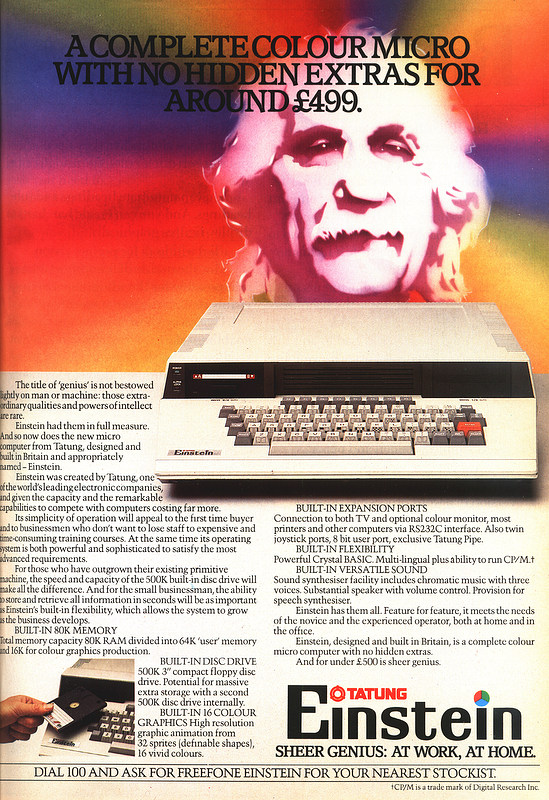 "A Complete Colour Micro With No Hidden Extras for Around £499"

Designed entirely by Tatung UK, an offshoot of Taiwan's largest company, the Einstein was aimed vaguely at the business market, but with a Zilog Z80A processor could also emulate the 48K ZX Spectrum, via an add-on. It was also popular as a development machine, thanks to its reliability and ease of use - the pseudonymous Joff, a programmer for games software-house Ocean, who was using an Einstein to port Konami's arcade titles to Z80-based machines, said of it that "the assembler is brilliant, a pleasure to use"[1]. It had a 40-column display, 3-channel sound and, apart from its 3" 500K Teac floppy drive, could almost have been an MSX machine . Its retail price put in the expensive end of the market - £500 would be around £1,640 in 2023 terms, but in the summer of 1985 Tatung joined in with the price wars raging at the time by chopping £150 (£470) off the price of the 64K model. There was even a bundle containing the Einstein plus 3" drive, colour monitor and £190-worth of software for £500, putting it up against Amstrad's CPC 664[2].

Both the Tatung and the Amstrad had limitations when it came to running the venerable CP/M operating system - the Amstrad had too little memory and the Einstein only had a 40-column screen, which meant CP/M was unusable. However Tatung fixed its shortcomings with the release of an 80-column module, and with the price cut was finally giving the Amstrad a run for its money. This seemed to spur some interest in the market, so much so that Geoff Lynch of Southampton-based CP/M specialists Xitan was taken to grumble about having to field calls from Dixons branch managers wanting software for the 10,000 Einsteins the High-Street retailer had bought in the previous two months, all of which happened after Xitan had already "gently run down" its CP/M output[3].

Back in the spring of 1985, Tatung was vigorously denying rumours of a new machine - a confession which could sometimes be fatal to the prospects of an existing computer. Tatung's Tony Adams said of the current Einstein that if was selling "quite happily", even though sales had only been about 14,000 up to that point, which was well short of the company's expected output of 200,000 machines through the year. The company had also recently announced 70 redundancies, following the merger of its computer and television divisions, although that left 800 people still employed in Telford[4]. However, by the end of 1985, Tatung finally admitted that it was working on a new machine, but insisted that it would be backwards-compatible with its current model. The new machine would have 80-column display and have 128, 256 or 512K memory. By the spring of 1986 the new machine still hadn't appeared, although its spec was now refined to 256K RAM, stereo sound and 512 colors[5]. It was now due to be out by the end of summer, and was expected to be "competitive with Amstrad", which had very much become the company's competition thanks to their shared heritage in the Z80. The add-on which allowed the Einstein to run Spectrum programs was also released at the end of 1985 and cost around £30 (£94 in 2023 money)[6].

Unrelated to any of this, Tatung was also having to fend off questions about its recently-exposed "no smiling or laughing" policy at the factory in Bridgenorth where Einsteins were made. Somewhat lost in translation, the Taiwanese management apparently meant simply that the workforce should have a serious attitude when using dangerous machinery[7]. The Bridgenorth factory in Shropshire was formerly that of Decca's consumer electronics division, which Tatung had bought in 1981[8].