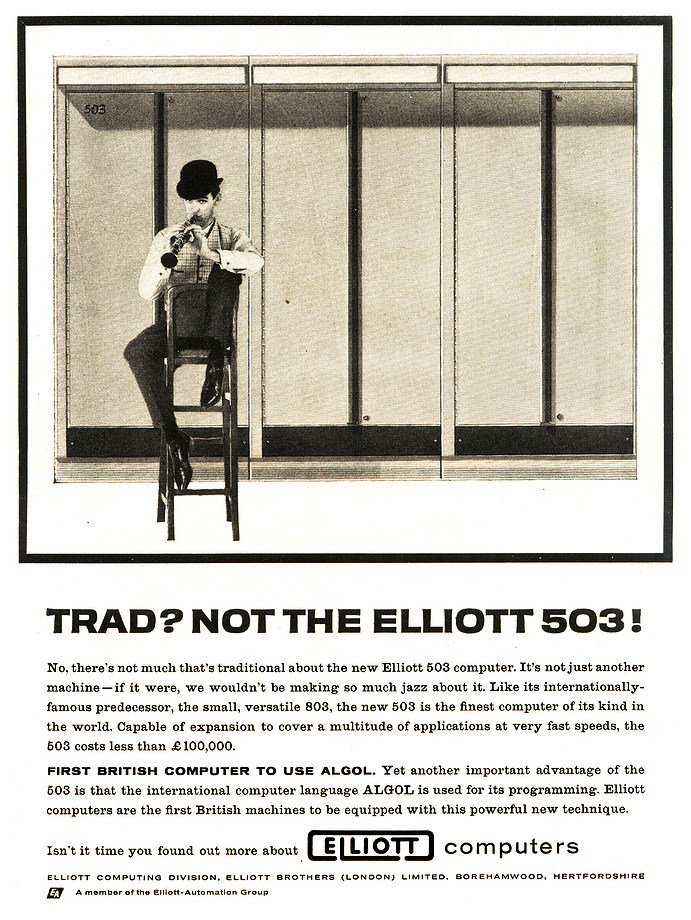 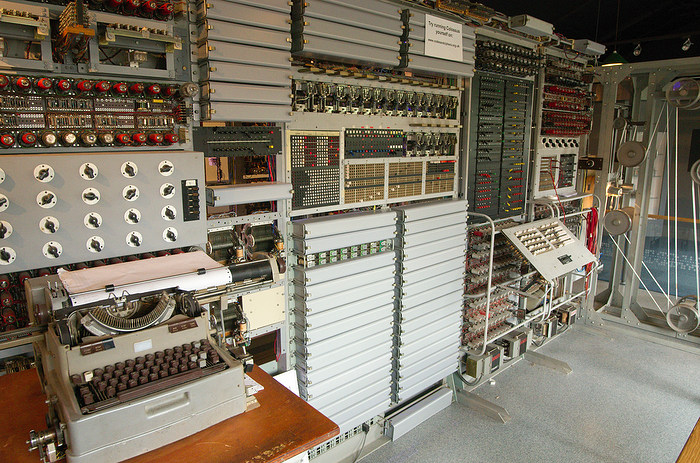 The re-built 1940s Colossus at The National Museum of Computing, BletchleyThe Elliott 503 was built by British computer company Elliott Brothers, a subsidiary of the Elliott Automation Group, as a much faster but software-compatible evolution of the 803 mentioned in the advert. 250 "803" machines were built, of which an example still runs at The National Museum of Computing in Bletchley, the home of Colossus.

According to the advert, Elliott built the first British computers to run the computer language ALGOL, which had been implement by well-known computer scientist Tony Hoare on the 803[1] whilst he was working for the company.

Hoare was perhaps more famous for inventing the quicksort algorithm, but he was also infamous as the inventor of the "null reference", which he called his "billion dollar mistake" in acknowledgement of the problems it caused for generations of software developers that followed[2].

Elliott eventually merged into a group which also included legendary British companies Marconi, English Electric and Leo - part of J Lyons' restaurants and tearooms empire and which built the world's first business computer in 1951. The business-focused part of this group in turn became part of ICL - a 10%-nationalised company formed in 1968 by Harold Wilson's Labour government, whilst the "interesting bits", including the automation parts of Elliott, went to GEC[3] - the company which would end up briefly running Dragon Data before the the latter's collapse in 1984. GEC would eventually end up as part of BAe Systems, whilst ICL was subsumed by Fujitsu in 1998, although it kept its name until 2002[4].

Reading through the technical documents[6], it looks like this machine had storage roughly analogous to 40kB (8192 5-byte words), with a "cycle time" of 3.5μSecs, which gave it an approximately 280KHz processor - that's about 10,000-times slower than a 2019 Pixel 4 smartphone. Technical development at the time was focussed much more on miniaturisation, such that a Commodore PET, which arrived 15 years later in 1977, was only 4 times faster, still had roughly the same amount of memory but was about 500 times smaller.

Inmos's Newport Plant, designed by Richard Rogers, © Popular Computing Weekly, July 1982Tony Hoare cropped up again years later in the early 1980s when he was involved as consultant to David May, the Chief Computer Architect at Inmos.

Inmos was a 1978-founded government-funded British semi-conductor manufacturer, backed by around £100 million from the British Technology Group - formerly known as the National Enterprise Board which had bailed out Sinclair in 1978.

From its Richard Rogers-designed manufacturing plant in Newport, Wales, it had started out by producing memory chips and by 1982 was providing more than 80% of the world market for 16K static RAM.

Despite that, the company still managed to report a £17.3 million loss for 1981 and required much in the way of state aid to keep going, eventually sucking up over £200 million of government money, before it was sold in the Autumn of 1984 without ever becoming profitable[7].

Inmos then moved on to CPUs, with its first product in this market being the T-series Transputer, with models such as the T424 - a fast 32-bit chip with 4K on-board RAM, external memory interface, its own peripheral interface and four high-speed serial links to the outside world. Crucially, this serial link meant that it was (relatively) easy to connect a whole raft of Transputers directly together, forming a massively-parallel system.

Such a set-up needed a new progamming language, as those already available - Fortran, Cobol, Pascal, Pascal's precursor Algol 60, or even BASIC, which developed from Fortran II - were not suited to multi-tasking or concurrency. The language May came up with was called Occam, in reference to the 14th-century English philosopher Willam of Occam whose famous contribution to culture - Occam's Razor - was summed up by John Cook in Popular Computing Weekly as "if in doubt, leave it out".

Tipped as a possible "5th generation artificial intelligence language of the future", a version of Occam was also to be found on the 68000-based SAGE IV[8].