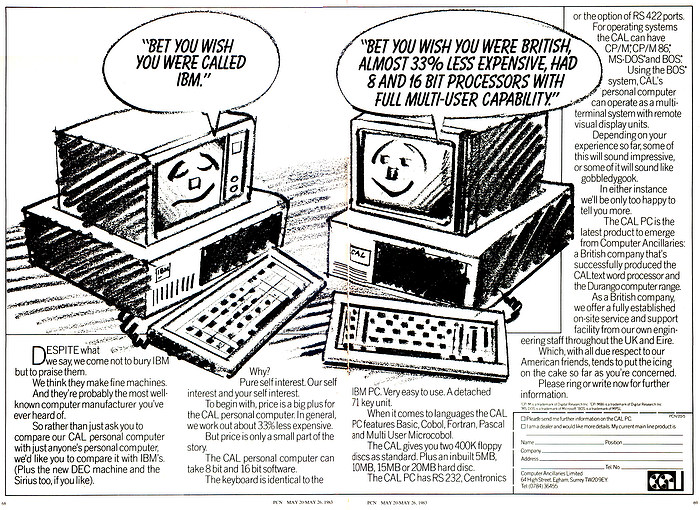 CAL Personal Computer: Bet you wish you were called IBM

It's sometimes mistakenly given that the name of the intelligent computer in 2001 - HAL - is a dig at IBM, as it's every letter of that company's acronym shifted down one in the alphabet. This is denied by Arthur C Clarke, but it's tempting to think that perhaps British company Computer Ancilliaries Limited came up with a suitable "backronym" to fit with CAL, in a nod to HAL. The CAL PC was a straightforward IBM clone, so the whole thing would be a nice sort-of circular in-joke - after all, who would otherwise have a company name with "ancilliaries" in it?

Despite on the one hand being considered "a very ordinary lookalike", the CAL PC was also said to be "demonstrably more sophisticated than the IBM design". It had two processors, in the Z80-B (which ran at 4MHz) and the same 8088 16/8-bit CPU as the IBM. In a departure from the pure IBM clone market, it also offered a range of application software running on the Business Operating System (BOS). It also had larger-capacity disks than IBM, with 400K with the option of double-sided 800K disks[1].

CAL were also notable for producing the bizarre "Durango" range of machines the year before.