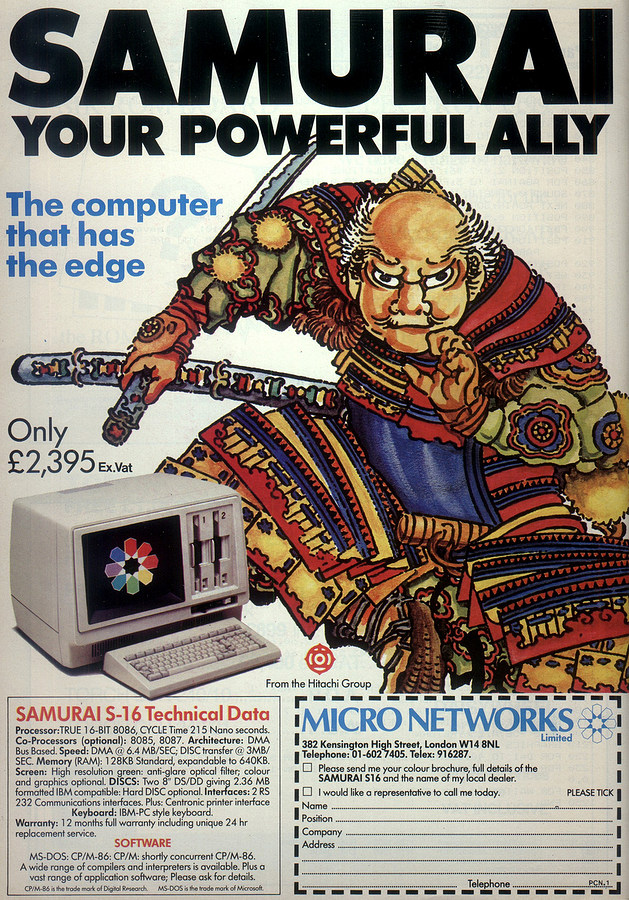 Despite fears of an imminent Japanese invasion going right back to almost the start of the Personal Computer revolution, not much really happened until Microsoft-sponsored Japanese-backed MSX machines started appearing in dribs and drabs. Even then, it was slow going, with one of the first such being 1983's almost-MSX SpectraVideo. By the spring of 1984, Hitachi was previewing its MSX offerings at April's Hannover Fair, but the word at that time was that MSX wouldn't arrive until the autumn of the same year with suggestions in the press that there was a pact between the members of the consortium meaning that "no one manufacturer would start shipping in to Europe until they are all ready"[1]. MSX was based on the 8-bit Z80 and its specification was considered fairly mundane even when it was first mooted, but by the time the MSX consortium got on a roll towards the end of 1984 and through 1985, it was too late as the 8-bit market was dead - the immediate future would instead belong to 16-bit machines based mostly on IBM's 5150 PC specification, with some notable exceptions like the Atari ST, Commodore Amiga and Apple Mac, all based on Motorola's 68000.

Meanwhile, Hitachi was clearly hedging its bets with The Samurai, produced by subsidiary Nissei Sangyo, by basing it upon Intel's 8086 - the 16-bit version of the venerable 8080 series - with two 8" floppy drives giving a total of 2.36MB. It retailed for £2,754 (including VAT) - about £9,490 in 2021 money. It was also the machine that caused a UK startup, which would go on to launch the machine that would have been superb if it hadn't been 18 months late - the Enterprise/Elan - to change its name for the first, but sadly not the last time.

Hitachi and Nissei Sangyo clearly had a lot of faith in their Samurai machine, which was sold on the basis of quality control and reliability, as not only did it have a one-year on-site warranty, but its engineers would actually call on-site on the same day, should a fault occur. There was even a no-quibble replacement guarantee if a faulty machine couldn't be repaired within 24 hours[2]

At the end of 1984, Hitachi announced that it had developed a completely mad "mass floppy disk drive" system with a capacity of an unheard-of-at-the-time 5GB. The system used a staggering 500 8" floppy disks, tightly packed and separated with stainless-steel spacers, and driven by a powerful motor. The drive could transfer at a rate of 700K per second, which made it faster than optical drives, but its main feature was that it was about one tenth the equivalent cost of regular hard-disk storage[3].