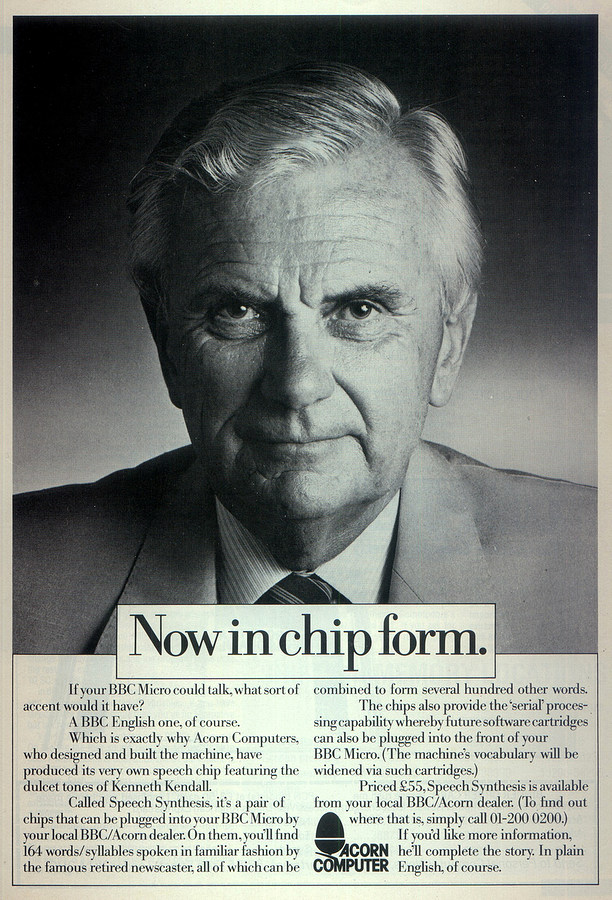 This advert is for a speech synthesis chip for the BBC Micro which used the voice of one of the greats of 1970s television news broadcasting - Kenneth Kendall. It's a nice bit of circular reference as Kendal was indeed one of the last "BBC English" voices in the true broadcast sense, as well as now an English voice for the BBC (micro). This was also something of a dig towards existing computer speech, which was invariably some sort of robo-Californian where "party" was "pardeee" and "water" was "wah-der".

The attempt by Acorn to give a real voice to a computer was not altogether successful, with Guy Kewney of Personal Computer World writing in July 1983's issue about the chip's first appearance on television that "it sounded like a damaged recording of a four-foot Jew's Harp being buzzed by a timber-mill bark stripper, through a helicopter-mounted carbon microphone, down a faulty telephone line". In the programme, Ian McNaught-Davis had failed to persuade assistant Chris Searle to "agree that it sounded human, never mind Kenneth Kendall"[1].

Called prosaically "Speech Synthesis", it was actually a pair of chips that were inserted on to the motherboard of the BBC Micro. They provided a vocabulary of 164 words or syllables, which could combine to form "several hundred other words". Other cartridges could be added later which would expand the repetoire. It retailed for £55 - about £180 in 2022.

In other Acorn news a month later, the company had apparently just discovered that women were falling behind in the "race to computer literacy". One possible cause, suggested by Personal Computer News was that "women were waiting for Acorn's second processor on the BBC" - a dig at the huge delay between the announcement and the arrival of a second 6502 processor add-on unit. Chris Curry of Acorn referred to some three-month-old gardening software as an example of how Acorn was solving the issue, saying "We are attempting to do something about this problem by aiming our products as much at women as at men". Meanwhile, a company spokesdroid said that it was attempting to produce software "that is more relevant and more useful to women"[2]. Curry had even been taken to task over the issue whilst he was giving evidence to a House of Lords Select Committee in the summer of 1984. Lady Lockwood complained the Curry had been "apologetic in the way he had explained the need for programs on subjects like knitting". She said "The whole problem is that the so-called masculine subjects have always been taught in a way which does interest boys. I do not think you would have made the same pologetic point had the program been concerned with cricket or warfare"[3].

At the same time, Nigel Backhurst, general secretary of the Computer Traders Association (CTA) announced that the CTA intended to make a submission to the Secretary of State for Industry requesting that the government declare the BBC Micro's specifications public domain. It was hoped that this would lead to the BBC effectively becoming a "micro standard for the UK industry" and would allow manufacturers to build their products around BBC compatibility, reducing fragmentation in the market. Acorn was "unimpressed" by the move, pointing out that "Acorn's licencing agreement with the BBC in no way affects its ownership of the computer's design". The upshot was that although the BBC received a percentage of revenue for each micro sold, allowing Acorn to use the name, that was "the end of the matter"[4] and the BBC had no other rights over the design.

It wasn't only Acorn's second 6502 processor that was late, but the chip that was considered as the "final part of the BBC System" - its 32-bit "Gluon" second-processor system based on National Semiconductor's "superchip" 16032 - was running so late that there were even rumours that Acorn might have to drop it. The rumours were in part fuelled by stories in the press suggesting that NatSemi was finding it difficult to get the chips to run at the 10MHz that Acorn required, having already taken five months to get from 6MHz to the current 8MHz. NatSemi stated, somewhat unhelpfully, that "It could be two, three or five months. It could be earlier, it could be later". Acorn had already tested prototypes of the chip in its usual second-processor unit together with 250K of memory made up from 64K RAM chips, a configuration required to run Unix or the PC version, Xenix, on the processor[5] and was intending to market the stand-alone version of the Gluon, which could use an existing micro as a terminal over an RS-232 link, to the 2 million PET, Tandy and Apple owners thought to be in existence worldwide[6]. Shortly afterwards, NatSemi decided to rename the chip the 32016. This gave rise to a joke printed in Acorn User in August: "I hear Acorn's dropped the 16032 second processor." "Really? what are they doing instead?" "Something called the 32016. Apparently the same architecture as the 16032 but twice as late"[7].