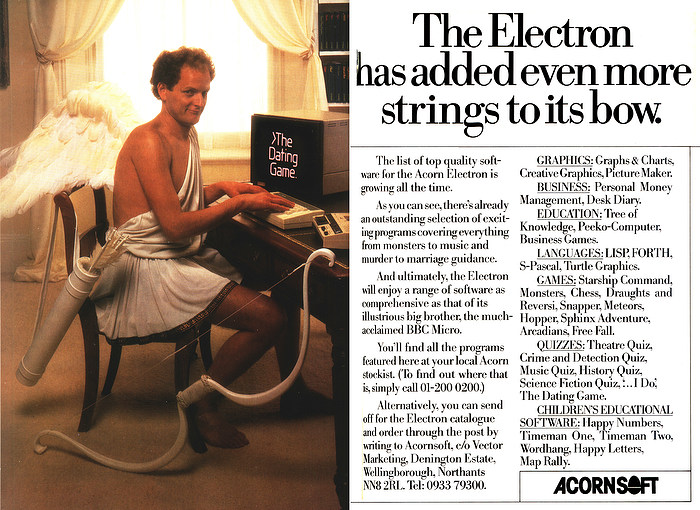 "The Electron has added even more strings to its bow"

Here is another advert for the Acorn Electron, featuring a dude rather self-consciously dressed up as Cupid. The Electron, launched in the summer of 1983, was a cut-down version of the successful BBC Micro and was intended as a something that families could afford to buy for home but which remained more-or-less compatible with the expensive BBC Micro at school. As such, Acorn was following a similar risky strategy to Commodore, as both companies had effectively launched what were really inferior machines to the computers they already had in the market (Commodore's follies were the C16 and the Plus/4). Acorn kept the price of the better BBC Micro high during a time of cut-throat competition - it was still retailing for between £350 and £400 whilst a Dragon 32 could be had for £90 - a move that was probably partly to keep the Electron looking attractive in comparison, but also because it had contractual obligations with the BBC that made cost-cutting difficult[1].

Production issues meant that the Electron was not available in sufficient quantities for its first crucial Christmas 1983 sales window, a situation which battered the company's finances and which left it with huge unsold stocks in the warehouse when supplies it was committed to finally arrived early the following year. Acorn, which had debts of £47 million (around £140 million in 2023 terms) and a share price that had crashed from 193p to 28p, had to be bailed out to the tune of £10.9 million (49.3% of the shares and about £31 million in 2023 terms) by Italian typewriters-to-computers firm Olivetti in February 1985 and again in July of the same year with an extra £4 million investment, which took Olivetti's shareholding to 79.8% - a move which meant that the publicly-owned portion of Acorn fell from 10% to 6%[2]. Acorn's Alex Reid, appointed emergency chairman over Chris Curry and Hermann Hauser's heads by Olivetti[3], suggested that Acorn "[was] on the verge of receivership" - avoiding it meant that creditors agreed to write off £7.9 million in debt and the BBC waived 50% of the royalties owed to it from the previous year[4]. 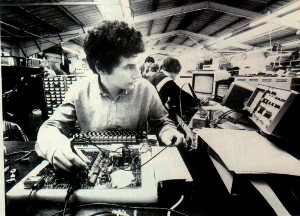 Testing BBC Micro motherboards at Race Electronics, Mid Glamorgan, © Personal Computer News 1983The Electron was also notable for the fact that by this time Acorn had managed to cram nearly all the BBC B's functionality onto a single all-singing, all-dancing 64-pin uncommitted logic array (ULA), with only seven more chips - the 6502 CPU, two 16K ROMs and four 64Kbit RAMs - making up the rest of the chip count. This was in stark contrast to the original BBC's "expensive and complicated board"[5]. Third-party companies were offering add-ons that filled in the remaining gaps and made the Electron even more like the BBC Micro, such as Broadway Electronics' "Mushroom" sideways ROM card[6], which allowed Electron users to plug in standard BBC ROM-based software-on-a-chip, like Acornsoft's ViewSheet spreadsheet.

Acorn's older machine - the Atom - was effectively retired following the launch of the Electron, with Personal Computer News commenting on how the Electron had more in common with the Atom than the Proton (BBC Micro), despite the Electron being launched as a "cut-down BBC". The prices of the two machines were similar - £200 (£680 in 2023) versus £150 (£620) for the Atom in 1981. They had the same 6502A processor, much the same keyboard and much the same standard facilities[7]. Despite the comparisons with Acorn's ancient first real computer, the Electron reviewed well, with Personal Computer News concluding "Acorn has an undoubted winner. The Electron isn't quite as simple as a half-price BBC, but it does bring you amazing graphics and one of the fastest and most-capable Basics in the business. Only the lack of built-in interfacing and technical information spoil the Electron's image. For a while, the price will be a stumbling block, but I suspect it could be lowered to £150 if need be"[8]. That price drop didn't appear to happen, at least not right away, as it was still retailing for £200 at the beginning of 1985. 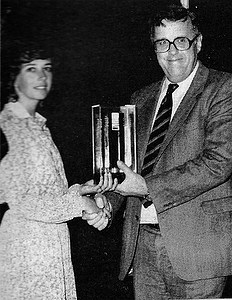 Pamela Hauser accepting the RITA award from Ian McNaught-Davis, © Acorn User, March 1984Meanwhile, in the spring of 1984, Hermann Hauser, Acorn's co-founder and the executive responsible for the Electron's R&D, was named as Personality of the Year by RITA - Recognition of Information Technology Achievements - a sort-of Oscars of the computer industry. Hauser was unable to collect the award in person as he was away in Japan, so his wife Pamela picked up the award on his behalf at the thrash in Birmingham[9]. The award was presented by Ian McNaught-Davis, presenter of the BBC's "Making the most of your Micro" TV series - part of its computer literacy project. The selection of Acorn's previous machine - the Proton - as the "BBC Micro" had propelled Acorn to the number three manufacturer in the UK, behind Commodore and Sinclair. At WH Smith, the High Street retailer, the Electron's sales were even expected to climb to second place behind the Spectrum during 1984, according to John Rowland, Smiths' marketing manager. Rowland even commented that "it's going like a train", before hinting that supply problems were still an issue as he continued "we could certainly sell far more than we can get hold of at the moment as there is still a problem in getting sufficient supplies". Rowland was also optimistic about the Electron's future as there was a high level of interest being shown by software houses and peripheral manufacturers[10].

The Acorn-friendly Electron User magazine was also reporting in March that plans were under way to sell the Electron in the US "within the next 12 months". This was apparently "following the initial success of the BBC Micro in the US education market"[11], however that success, if any, was fleeting as Acorn would go on to lose £8-£10 million (£31 million in 2023) on its eventual failure to break the US market, leading to Olivetti's bail-out in 1985. On the upside, adapting the Electron to the US NTSC television standard, with its fewer lines, meant that the Electron had slightly more memory available to programs compared to the UK version.