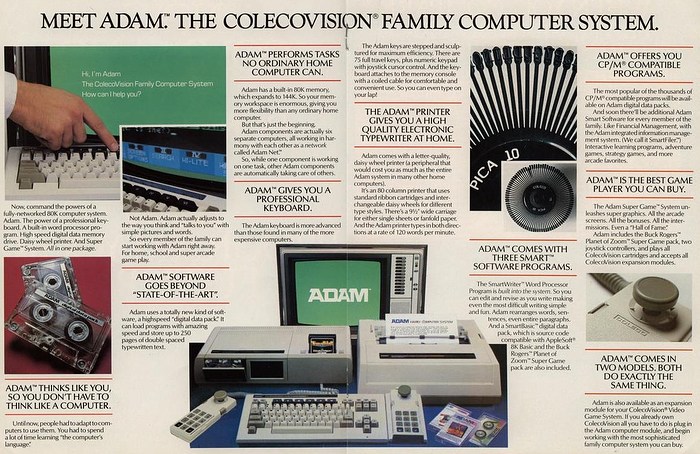 Coleco's Adam was announced in a "blaze of publicity" during the summer of 1983 and appeared to be a major breakthrough in price, with Popular Computing Weekly suggesting that it provided a system comparable to machines costing four times its $600 price. It even promised Basic compatibility with Applesoft, an expansion module that could take Atari's VCS/2600 cartridges, as well as having a slot for Coleco's own Colecovision titles and could even support CP/M[1]. The mention of Atari cartridge support for parent company CBS's ColecoVision games system caused some problems when Atari filed a $350 million law suit claiming trademark and patent infringements. CBS responded by filing a $500 million counter lawsuit claiming restriction of trade, however the case was settled when CBS agreed not to use Atari's name or logo anywhere and instead refer to their cartridge slot as the "Expansion Module Number 1"[2].

At the time of the launch, Coleco - the toy company most famous for the bizarre Cabbage Patch Kids, which was a huge and baffling craze in the 1980s - reckoned that it would have 500,000 Adams on the streets by Christmas of that year, whilst US "industry experts" were saying that the Adam would simply create its own market as it was offering a complete system at a mass-market price. By August it was claiming that the Adam had sold out before the first unit had even been manufactured, as it said that it had commitments from American retailers for all 500,000 machines it planned to build in 1983[3], but in fact it barely shipped 100,000 before the Adam was canned in 1985 - apparently upsetting "important friends" in the process.

The Adam was an odd concept, being part video-game console and part office machine with its built-in daisywheel printer - based on the Smith-Corona TP-1, high-speed tape drives and "professional" software. It was intended to sell for the optimistic price of $600 (about £400, or £1,370 in 2021) but was soon up to $700. It suffered from optimistic production targets and was beset with reliability issues, with US mega-retailer JC Penney cancelling its order because the Adam didn't meet its quality standards and Consumer Reports magazine refusing to review it because none of the four preview machines that had been shipped to it actually worked. Even the deal with big-name Honeywell to provide support seemed to backfire by somehow drawing attention to reliability issues. Meanwhile, Coleco was claiming that its return rate was less than 10%, but it didn't really matter because, as Personal Computer News pointed out, the machine was "wandering lost in the Commodore-dominated home computer market"[4].

Coleco posted a $35 million loss in the last quarter of 1983, only months after the launch, before unexpectedly announcing an increase of $125 in the wholesale price of the Adam in November 1983. This would have put up the price of the machine by as much as 14% at a time of ongoing price wars, although Atari - faced with similar financial problems - had also been forced to raise the wholesale prices of its 600XL and 800XL micros[5]. Coleco battled on through 1984, but perhaps the decision to axe the machine - making it the first micro casualty of 1985 - was inevitable. The Adam hadn't been officially launched in the UK and according to its UK distributor CBS Electronics, very few machines had been sold here, even though the company's Alan Abrahams had been forecasting a few thousand machines at first, whilst it was also claiming 4,000 UK orders for the Adam by the end of July 1983[6]. A spokesman offered comfort to those few hapless owners by suggesting "I don't think that they'll find it a major problem to obtain logistical support from other suppliers". He continued to elaborate on the failure: "We never put any muscle behind it. It was very low profile as far as we were concerned because the company felt that it should watch the market before it made any commitment".

On bailing out, the company issued a statement which was to provide just as valid to the remaining incumbents in the micro market: "Rapidly changing consumer preferences, frequent technological developments, overproduction and significant and continuing price cutting have created an unusually volatile business market which is likely to continue for the near future". Personal Computer News wrapped up its comment on the situation with the prophetic "...and it indicates that 1985 could be another difficult year"[7].

The failure of the Adam also caused some collateral damage, with software producer for the machine - Insoft - announcing that it had declared bankruptcy after having got only half the money owed to it by Coleco[8].

Only weeks after Coleco announced the dropping of the Adam, in the latter half of January 1985, it was reporting that it had developed a new computer. It had showed the machine, which featured a built-in telephone, modem and communications software and which it was hoping to licence to "an un-named American consumer electronics manufacturer", to an invited group at the winter CES in Las Vegas. It also announced that it was "still producing both hardware and software for the Adam, but due to current conditions in the marketplace and the rapidly changing demands of the consumer, the Adam could not remain a competitive concern". Even though Coleco no longer had any part in marketing the Adam and had dumped its remaining stock onto an "undisclosed retail outlet in the US", it retained the rights to the name"[9].

Advert sourced from the Internet Archive[10].