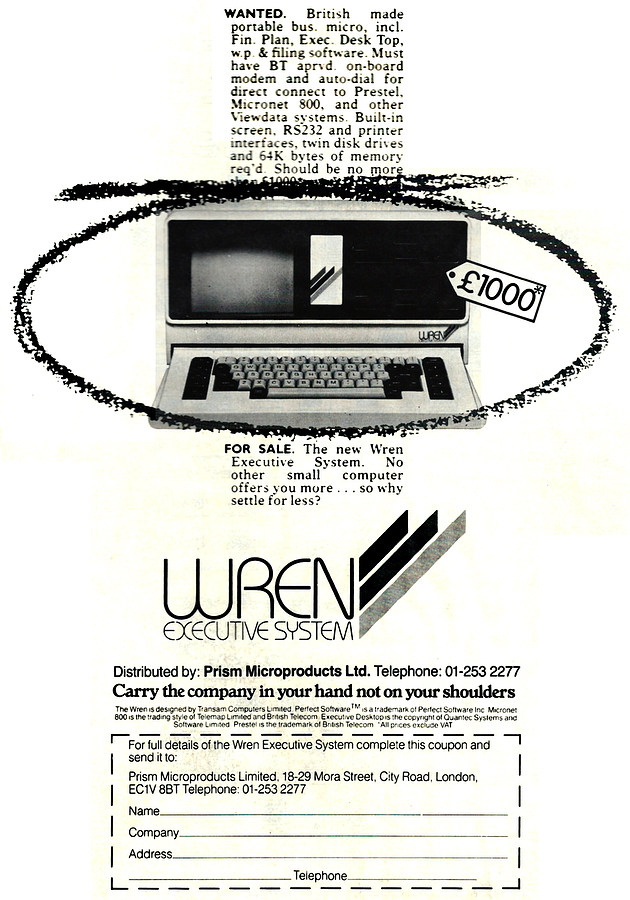 The Wren Executive: Carry the company in your hand, not on your shoulders

Billed as a portable, but really just a luggable along the lines of the much earlier IMSAI PCS-80/30 from 1978 or the contemporary KayPro, the Wren was built by Thorn/EMI (who were big in the software game at the time) under contract from Wren Computers Ltd, a joint venture between Transam Microsystems - makers of the Triton and the Tuscan - and Prism, best known for its modems but which also distributed computers for, amongst others, Sinclair. This was the same Prism Microproducts which had suffered the theft of around 3,000 Spectrums from its warehouse in July 1983[1]. Sadly, Prism wouldn't be able to have that many machines stolen again as only 1,000 Wrens were made before the company went bust[2]

The Wren came with a built-in modem and access to the big on-line systems of the day, in particular Micronet 800 and Prestel. It retailed for £1,150 - about £3,790 in 2021 money. Personal Computer World said of it that "under normal circumstances, a portable computer with all the bits including a modem and bundled software for £1000 would appear to be good value. However, in the light of Sir Clive's latest offering [the QL] it looks rather puny"[3] .