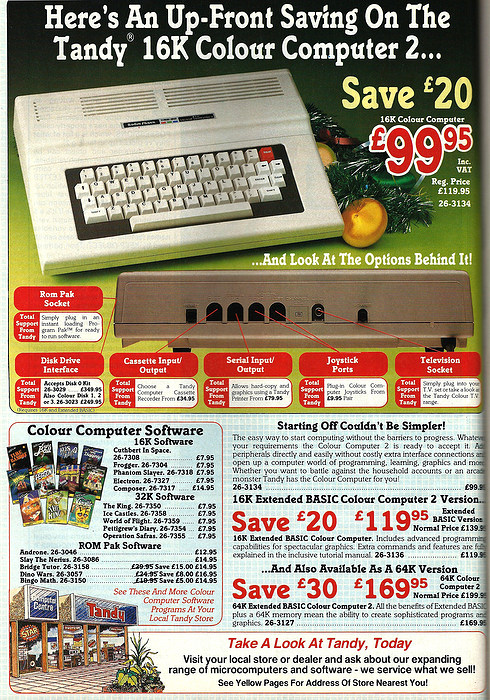 Here's a festively-themed advert for the second version of Tandy's Colour Computer, or "CoCo". With £20 off coz it's Christmas, the CoCo was available for only £99.95 - only £320 in 2022 money. Still nominally known fully as the TRS-80 Colour Computer, the original CoCo was launched in 1980 at the dawn of the home computer explosion, and only three years after the first three - the Commodore PET, original TRS-80 and Apple II. The CoCo, however, was not compatible with the original TRS-80, as it used Motorola'a 6809E instead of the previous Zilog Z80[1].

The use of the Motorola 6809 did however put the CoCo on an eventual collision-course of sorts with the Dragon 32 and 64 micros, as the latter computers used the same unusual processor and as a result had a lot of compatibility with the Tandy - so much so that when Dragon Data was put up for sale at the end of 1983, following the collapse of its parent company Mettoy, Tandy/Radio Shack briefly considered a buy-out[2]. Tandy eventually decided against the idea, and Dragon went to GEC.

Tandy had resolutely stuck with its TRS-80 designation since the first model in the range, launched way back in 1977. However, by 1985 it was facing declining market share and indifference towards its recent Model 4 range. And so, as was the fashion at the time, it launched its Model 2000 - faster and better than the IBM PC, but sadly not entirely compatible with it. David Ahl of Personal Computer World reckoned that Tandy should have asked its Texan neighbour TI all about the joys of launching not-quite IBM clones.

It fixed this particular problem when it launched the fully-compatible Model 3000 at the beginning of 1986, along with multi-user capability and a reorganised direct-sales-focussed salesforce. However its bigger move was perhaps that it finally dropped the TRS-80 designation as well as the "Radio Shack" part of its name, which had been in use since the company's founding in 1921, with the hope that the re-branding might make it more attractive in the Fortune 1000 corporate market. However, Ahl suspected that the Radio Shack image might hold the company back for a lot longer than it suspected[3].