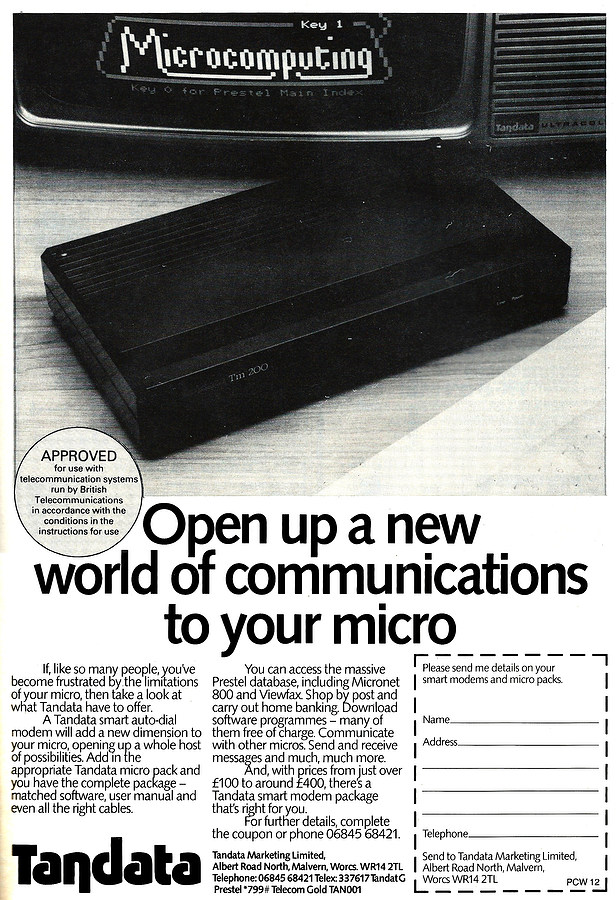 Open up a new world of communications to your micro

Tandata Design Consultants formed out of Tangerine, the makers of the Microtan 65, as a designer and manufacturer of modems and communications equipment. Both companies are related to Oric, which was formed by Tangerine's technical director Paul Johnson and included Tandata's former managing director Peter Harding. For a while, the Oric was sold as "Oric 1 - created by Tangerine". It was sometimes said that "all the honest people from Tangerine went to Tandata and everyone else formed Oric"[1]. The top end of Tandata's modem range sold for around £400 - that's about £1,310 in 2021 money.

A few months before, at the beginning of 1984, Tandata had something of a coup when they secured a deal with Prestel to build an adapter for the UK's first home banking service, launched as a collaboration between the Nottingham Building Society (NBS) and the Royal Bank Of Scotland. Tandata didn't at the time have a suitable product, but they had previously produced the first "alphanumeric" Prestel adapter - the Alpha Tantel. John Webster, MD of RBS said "Tandata showed a refreshing and innovative approach to our requirements for a full alpha keyboard and infra-red remote control. The product was targeted at Mr and Mrs. Everyman, not at computer buffs".

Tandata's specification for the adapter was enough to secure the gig, which led to the TD1400 "Homedeck". This ran a Rockwell 6500-11 CPU, a TI TCX-3101J modem and a Mullard 9735 "combined video and oscillator chip". The Rockwell CPU was actually a masked version of the venerable 6502, with ROM and RAM on the same chip. According to NBS's assistant general manager Mike Fitzsimons, the plan for the Homelink on-line banking service had kicked off as far back as 1975. Although NBS had "put a lot of thought" in to the service, the arrival of Prestel was the real catalyst. This benefitted Prestel as it was desperate to get in to the consumer market beyond the modest numbers of early-adopter business and trades users it had been getting[2].

One of the other abilities of Homelink was mentioned and also featured in an advert for the service in March 1984's Personal Computer World: electronic auctions[3]. Pre-dating eBay by over a decade, the first auctions included such randomness as a £48 Christmas food hamper going for £35.51 and a blue Spruce tree, worth £100 but bagged for £32. Just like eBay, a registered bid was binding. There was also home shopping, with companies like HL London Supermarche promising next-day delivery within a five-mile radius of Big Ben if an order was placed before 5.30pm on any weekday. Over 600 products were planned and delivery was even free. It was also possible to buy posh knickers and booze, as well as electricals from Telefusion and Comet[4].

After Sinclair was unexpectedly sold to Amstrad in the spring of 1985, Alan Sugar's company dropped the ill-fated QL - the 68008-based micro that had largely sunk Sinclair thanks to its poor sales. Tandata stepped in to rescue QL owners who wanted to get online when it bought the remaining stocks of Sinclair's QCom QL modem. The QCom modem had actually been manufactured by OE Limited, but OEL had gone into receivership in March 1985 thanks to unpaid debts left by the collapse of one-time Sinclair distributor Prism and, incestuously, Oric. Tandata had also taken on the rights to product the QCom software package as well as the rights to sell Scicon's communications software as bundled with the modem. The arcane approval process for telecomms equipment connected to the phone network meant however that Tandata was faced with getting new approval for the QCom, although a spokesperson reckoned that although the process had been "put in abeyance when OEL called in the receiver", it shouldn't take too long as "the product only needs its approval number to be given". Tandata was however keen to point out that it hadn't bought any other products that OEL had been manufacturing, including Prism's well-respected VTX5000 modem for the Spectrum or a Teletext adapter due to be supplied to Channel 4[5].

Tandata was still around in 1986 when it received a useful boost thanks to the Detartment of Trade and Industry, which bunged in £1 million to buy modems for middle and secondary schools. A little like the DTI's previous MISS (Micros in Secondary Schools) project, but for on-line-ness, the cash would allow schools to buy either a Tandata 512 or Dacom 2123 AD modem in order to access the DTI's new National Educational Resource Information Service (NERIS), which was due later in '86. Perhaps not expecting such a unanimous take-up as had happened for the previous micro schemes, which had seen a computer in virtually every primary and secondary school in the country, a DTI spokesman suggested that once it had guaranteed a modem for every secondary, "any that are left over will go to independent schools and teacher training centres"[6].