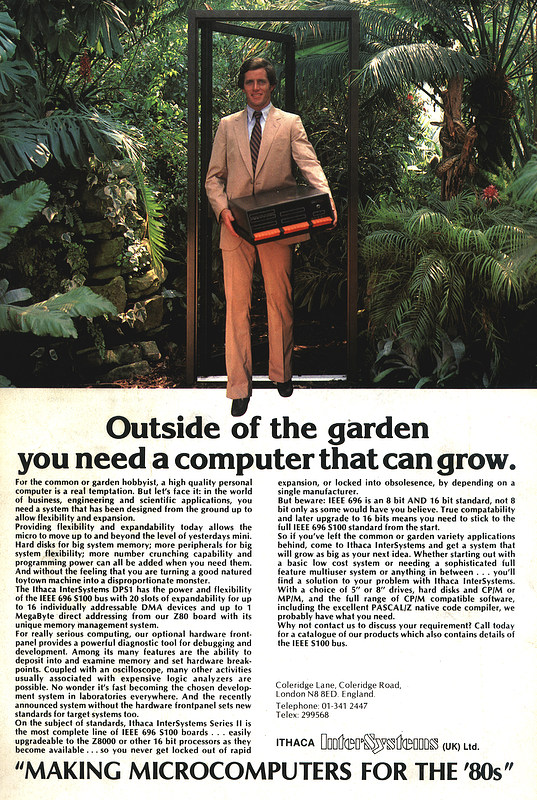 This adverts shows one of many Zilog Z-80-based machines of this era running on an S-100 bus - the Ithaca InterSystems DPS1. It seemed to aimed at the laboratory market, with no fewer than 20 IO slots and the ability to interface to an oscilloscope, but was launched in the era of the Commodore PET and Apple II - the form-factor of which had quickly become the de-facto for mainstream business and education - when the world was only months away from the era of the IBM PC. However, it gave nod to the (near) future as it also provided for 16-bit upgradeability, via a Zilog Z8000 add-on board, although none of this stopped it from looking like a big cassette or CD case.

It was, however, notable - according to oldcomputers.com - for being the last computer released that had front-panel switches as its interface, as well as being one of the first "home", or at least small, computers that would run Unix.

Ithaca had established a London office by October 1979 and had appointed Newbear Computing Store in Newbury as its main UK distributor, whilst also appointing Jim Wood, formerly of Comp Shop, as its European sales manager. The DPS1 that Newbear was selling was considered very well designed and well-built and went up against Cromemco and North Star machines, all of which were similarly based on the S100 bus. S100 had been around since at least 1975 but was still in the process of being ratified as an IEEE standard in 1979, which it finally achieved sometime in the early 1980s. Ithaca played its part in that process as Kells Elmquist, the company's chief engineer, was one of the prime architects of the S100 bus specification.