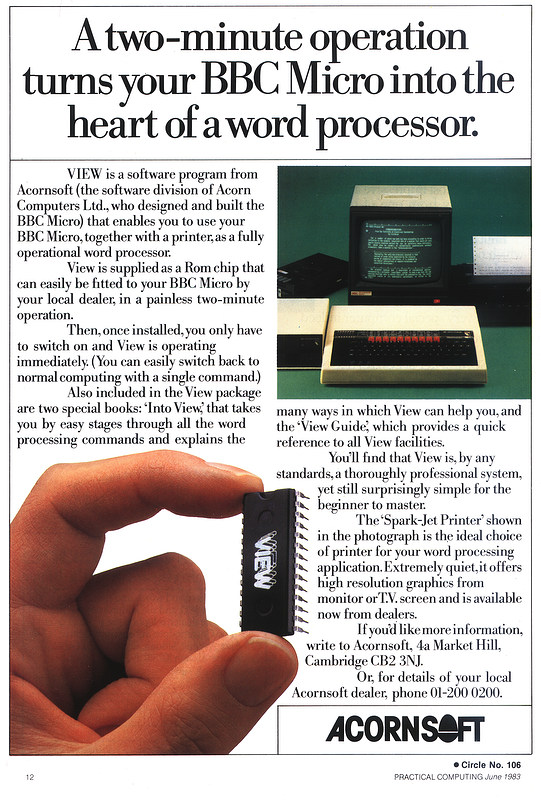 The Acorn Model B BBC Micro was quite a big thing in the UK, although didn't do much outside its home market. Its popularity was thanks largely to a unique collaboration with the BBC, which saw computing as an important future skill. The BBC undertook to popularise computing with a range of educational TV programmes, and following competitive tender commissioned Acorn, from a list of potential suppliers including Sinclair, to produce the machine. This tender process was triggered when it was decided, quite late, that the Newbury NewBrain - the choice of which had been made in November 1980 -would not be ready in time[1]. The BBC B was launched late and wasn't even widely available by the time the TV programs it was meant to support had started broadcasting. It was also fairly expensive, at least compared to the Commodore 64 and Sinclair Spectrum competition, with a price that even went up as time went on as Acorn tried to manage demand and cover some shaky financials. In April 1982, it increased by £60, meaning that the Model A now cost £300 (an increase of 25% to about £1,120 in 2022 money) and the Model B cost £400 (up 17% to £1,490)[2]. The reason for this increase was, according to Acorn, simply to stop the company going out of business and was spuriously justified as covering the expense of testing that all Model A's were of a standard that could be upgraded to the Model B, should the owner choose to do so in the future. Despite the expense, the BBC Micro still ended up selling about 1.5 million units[3].

Acorn eyes the US 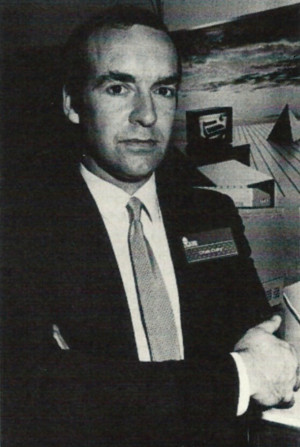 Chris Curry of Acorn - always stern, © Popular Computing Weekly, February 1985The beginning of 1983 had seen the start of Acorn's attempt to break the American market, with the company no-doubt emboldened by the fact that its machine was making up around 80% of all sales to schools under the Department of Industry's "Micros in Primaries Scheme". The perenially-stern-looking co-managing director of Acorn, Chris Curry, said of this that "Whatever the reasons, I think that there is every chance that the BBC machine will become the standard in schools". Curry was also taken aback that the BBC seemed to be doing well in the home market, adding with an obligatory dig at Sinclair that "The number of machines being bought by individuals for use in the home has surprised us. We never expected the BBC machine to compete with the Spectrum first time round, but people who want something better than the Spectrum are turning to the BBC".

Acorn was also looking around for other markets now that it had settled down in the UK and had cleared its "embarrassing backlog". It had opened a branch in Germany to manage distribution for the rest of Europe, and it Hong Kong-manufactured BBCs were being sold in to Australia and South Africa. The big pitch, however, was the US, where Acorn was expecting to have its NTSC-compatible version ready by April. Commenting on the price wars raging in the US at the time, Curry said "the [war] between Texas Instruments and Atari is vicious but, surprisingly, we find we are not price sensitive. The only machine which comes close to offering the same sort of performance in the US is the Commodore 64". Acorn reckoned that it would be selling its US version Model B for $800 (about £1,790 in 2022) and had already spent $250,000 re-broadcasting the BBC Computer Program on PBS[4].

It might have settled down in its home market, but even more than a year after it had started shipping in useful volumes it was still being reported that the machine was suffering from "teething troubles". In one case, Acorn had to recall 3,600 faulty cassette recorders which had been sent to schools as part of DTI package. The problem was that if the play or rewind button on the tape player was pressed whilst a program was loading, a voltage would pass over the erase head, destroying what ever was on the tape passing by underneath, thus rendering the program useless - which in this case was Acorn's "Micro Primer" introductory software. A headmaster of a Leicestershire school reckoned that this sort of thing would be likely to further discourage teachers with little or no computer experience, whilst it also reinforced a growing feeling amongst the teaching community that tape "drives" were simply not suitable for the classroom environment. Acorn suggested somewhat unhelpfully that the problem with the cassette decks - which had been manufactured in Hong Kong to its own specifications - would "not have been noticed if they had been used for playing music"[5].

Acorn had started planning its US move the previous Autumn, when it had shown its machine at the Info '82 trade exhibitition, held at the Coliseum in New York between the 11th and 14th of October. Acorn's Chris Curry and John Coll had gone over to the States personally to set up initial contacts and figure out a dealership network, but it was the decision to set up a US office that acted as the catalyst required to get the exhibition gig[6].

The lesser-remembered Model A version of the BBC was discontinued in the summer of 1983 as nearly all orders at the time were either for the Model B and the few Model A's being sold were being swiftly upgraded. Acorn denied that the move was anything to do with the imminent launch of its Electron, suggesting that "Although it looks like that, it is purely coincidental. It happens that people who buy the BBC seem to want the greater power of the B" before adding, somewhat disparagingly, that "The Electron, on the other hand, will tend to be attractive to people still on Sinclair-type machines"[7].

This advert is also interesting in that it shows what would now be considered an obsolete way to ship software: as a ROM chip that would be fitted into the host machine, permanently expanding its capabilities. Many systems of the day could do this - 1977's Commodore PET had four spare slots for extra ROM and add-on cards for the BBC Micro offered up to an unfeasible 148 slots[8]. If ever there was a sign that things have changed somewhat in the field of computer hardware is this quote from Personal Computer World, when referring to the installation of a colour video module for the PET: "If the [video] chip is socketed, first remove it, plug in the card and finally re-instate the chip in the socket on the card. If there isn't a socket, you have problems. The instructions recommend de-soldering the chip, but this is an awesome task even for the skilled. Better to gently sweat-solder an IC socket onto and over the resident chip. The card will now fit and a ribbon cable can be attached"[9].

Acorn floats on the USM

A few months after this advert came out, founders Hermann Hauser and Chris Curry made stock-market history when 10% of Acorn was floated, a limited share-offer move which Popular Computing Weekly said made sense as it kept control of the company firmly with the two founders. The sale was the biggest flotation the Unlisted Securities Market had seen to date, and with a minimum tender price of 120p per share for the 11,230,172 shares available[10] valued the company at £134.8 million (about £460 million in 2022)[11], or roughly the same as the £135.9 million that Sinclair was thought to be worth when it made a prive share placement in January '83. However, the inability to float more than 10% of the company was also seen as a failure in some quarters, with one stockbroker suggesting that "Fundamentally, Acorn are a disaster. There's a very real chance they will be bust in two years", despite the company having gone from sales of £31,000 in 1979 to £42.355 million in 1983[12] - a more-than 30-fold increase over its pre-BBC contract turnover for the year ended June 1981, where it managed £1.36 million[13]. It was also known that when Acorn floated, its shares never made the 120p price they were expected to reach, dipping first to 118p before ending up at only 108p by the end of the day[14].

Towards the end of 1983, Acorn undertook something of a recruitment drive - not just of regular staff but also of directors. Word from within the company, from a reputable former employee was that "if only Chris Curry would get off people's backs and let them get on with the jobs he gave them, and stop fiddling with everything, things might move a lot smoother". The "mole" hoped that the recruitment of more directors meant that Curry had finally stopped trying to run the company "as if it had the 35 people it did in February 1981". Directors recruited included former head of ICL's education services group Geoff Wood, who became marketing director of Acorn International, as well Bob Bayham, formerly of Sinclair, who became director of international export (apart from sales to the US). Others included Peter O'Keefe as UK sales director, with John Horton becoming R&D director and Peter Wynn moving up to financial director. Accompanying all this was an announcement stating that "Acorn will be recruiting about 15 new staff a month"[15].

Unfortunately for Acorn, it was also about to embark on its great attempt to conquer the US - an adventure that ended up in failure, cost the company £10 million and triggered the bail-outs by Olivetti in 1985. This had been in the face of "dire warnings from many quarters"