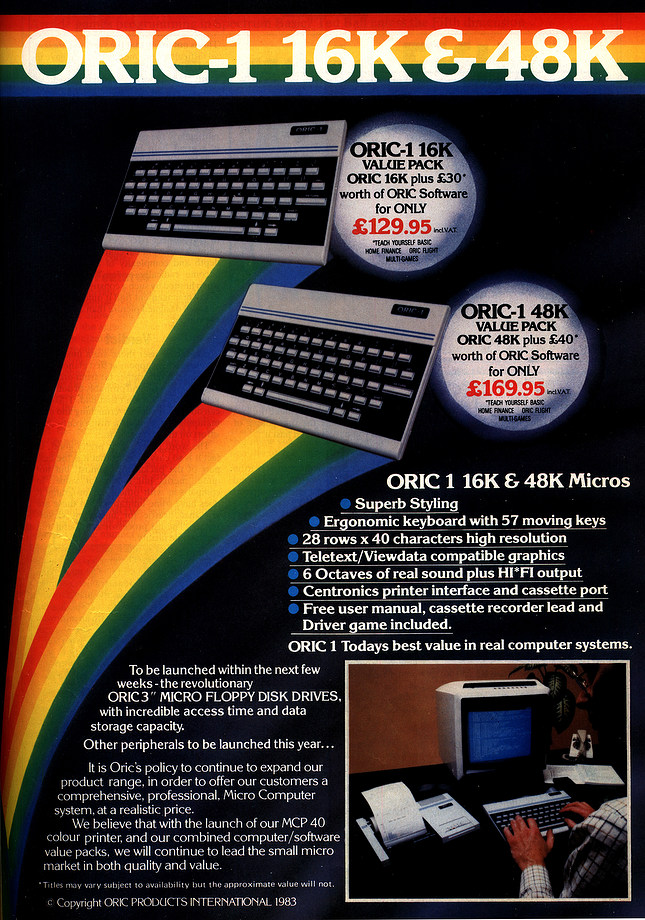 The Oric was aimed very much at the Sinclair Spectrum market - the models and prices were similar, with only a few pounds difference between them and even the graphics in the advert alluded to the Spectrum's product design. Unlike the Spectrum, it was based on the 6502, as used in the VIC-20, PET, Apple II and BBC B, however the Oric also had some custom chips which provided graphics and sound, including an Uncommitted Logic Array (ULA) chip made by California Devices of the US[1].

Launched by Oric Products International, a company funded by British Car Auctions, together with Tangerine Computer Systems, builders of the Microtan 65, a 6502-based single-board computer, the company was initially based at Coworth Park, an impressive stately home just outside Ascot. The project began in the spring of 1982 when John Tullis, a financial consultant at Tangerine, came up with the idea of a home computer. As Paul Johnson, formerly of Tangerine and now Oric's technical director explained, "We realised we would have to develop a machine at the very low-cost end of the market. There were far too many computers at the business end and, at the time, the only manufacture of home micros was Sinclair. Then, just as we started to look at the idea in more detail, the Spectrum came out". The company, which also included Tandata's former managing director Peter Harding, who was in charge of promotion[2], knew what its competition was, so the new computer had to have colour, sound, Basic and a full-sized keyboard.

The company decided to stick with the 6502 that Tangerine was already familiar with from its Microtan days, which, it said, was probably the world's best-selling microprocessor anyway. Plus it had the advantage that it could quickly modify its existing Microtan disc operating system to run on the Oric. The Oric was also designed to use as few chips as possible - something that Sinclair was particularly good at - and, combined with its custom ULA and the use of 64K DRAM chips, kept to a chip count of only eight. The Oric's ULA, or Gate Array, was designed by Johnson and handled all the I/O to the main processor, including video and memory addressing.

The first prototype was built in the summer of 1982 and used transistor-transistor logic, or TTL - essentially using bunches of transistors, rather than dedicated hard-wired silicon. Johnson, who had a PhD in high-speed digital to analogue converters for use in digital television, said "I designed it in my study at home - I just had to get away from the phone!". He continued "Once you have the TTL version working, you know the logic is OK. Then I went to California Devices Inc who were going to do the CMOS arrays. We first laid the thing out as a plan to see where the problems would be. Then we did a simulation of a new logic diagram and worked out the timing paths".

Meanwhile, armed with a TTL-based emulator, the first Oric ran in August of 1982, but by December the finished gate array was ready. Johnson continued "When the finished chips came through from California, we took out the emulator, plugged in the chip and it worked first time. It was quite a relief!". Johnson concluded that "As well as being a great games machine, a lot of businessmen will buy the Oric to learn about computing. Some of them will go on to invest maybe £20,000 in a larger system but, for the corner sweet shop, the Oric is all that is needed". He finished with a dig at Sinclair's claim that its ZX81 could run industrial-scale systems, by saying "Orics will not, however, be used to run a multi-million pound business or a nuclear power station!"[3].

The advert includes a reference to teletext/viewdata-compatible graphics - indeed the Oric was an early pioneer of online usage in home computers and had been designed from the outset to be able to connect to bulletin boards and the UK's Prestel service. This capability may have been down to the influence of the aforementioned Peter Harding, as Tandata was already manufacturing the "Tantel" Prestel adapter. Tandata was believed to be getting ready to sell a large number of adapters to the Halifax Building Society, just as Harding left the business. The Tantel was built in association with Prestel, which also commissioned software for the Apple, ZX81, TRS-80 and Commodore PET. It cost a bargain £205 (about £760 in 2023 money)[4]. The entry-level 16K Oric, on the other hand, retailed for a more modest £130 - about £440 in 2023 terms.

It was comforting to know that the UK's own Government seemed oblivious to the fact that Prestel adapters were even being made in the country at reasonable scale. Kenneth Baker - the minister who had launched the "micros in schools" schemes in 1982 and who was also in charge of all things "videotex", including Prestel - had assumed that they were all imported, when the topic came up in an early 1982 interview with Your Computer. He said "You have drawn my attention to the Tantel and it sounds very interesting. I will look into it. This is the kind of thing I am looking at to see if I can give some assistance in one way or another - through trade not aid"[5].

Oric released its own modem in January 1983, which became the first affordable modem aimed at the home market, retailing for only £60 (£200). It had even beaten Sinclair, which had intended to be first with a low-cost modem for the Spectrum but was delayed until the Spring of 1983, by which time both Oric and Micronet modems were available (the latter cost from £50-£100). Oric also provided its own "dial-a-game" service called "Aladdin's Cave", from which a variety of programs could be downloaded "day or night". Peter Harding said of this service "Telesoftware is going to be the medium of the future for software"[6].

The Oric didn't get off to a very good start when it was launched, late, despite Oric - just like its contemporary Camputers - claiming that it had learnt from Sinclair's mistake and wouldn't be announcing its machine as "available" when it actually wasn't, even though that's exactly what it did. Dogged by delivery delays on the Oric's ROM chips, the company attempted to "preserve the illusion of delivery" by letting a few pre-production models trickle out for review in time for the Christmas of 1982, as well as announcing that it was going to give away a free cassette copy of Forth with every machine[7]. Guy Kewney, writing in Personal Computer World (one of the UK's biggest computer magazines), didn't even get one. "What magazine do you write for?" they asked, when questioned. Colleagues at Personal Computer World, however, had churned through up to four machines each before getting one that worked fully, with the machines being unable to load and save programs and the early ones not even being able to edit. Apparently, when asked why the machines were all faulty, the response was that "the sample[s] sent were only functional in the hardware sense. Software would be supplied when it was working"[8]. 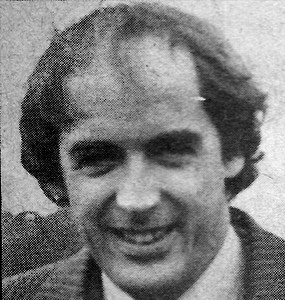 Barry Muncaster of Oric, © Popular Computing Weekly September 1983Oric's 16K version of its machine - which would provide the magic sub-£100 model that Oric was after - was further delayed, partly by "technical difficulties" but also, apparently, by demand for its existing 48K model. Oric's managing director (and director of Tangerine) Barry Muncaster explained that both versions had originally used the same design and that "We would have had no problems if the specification for a particular chip had not changed just prior to manufacture". This meant that Oric had to "completely change the 16K version's printed circuit board design - which, from start-up to production, has taken 12 weeks". Muncaster concluded that "from a manufacturing point of view, [the 16K machine is] a totally different product. This has caused a delay". At least Oric was being a bit more pro-active than Sinclair with its delays as, rather than sitting on the cashed cheques of thousands of customers, it was instead providing extended loans of 48K machines which would be swapped out for the 16K model when they finally appeared.

This was the second of Oric's models to run into problems - a 32K model, which had been announced the year before in November 1982, had been shelved in January because of a "chip incompatibility problem"[9].

When the 16K machines became more freely available, the Oric was reviewed again in Personal Computer World. Steve Mann wrote that "let it be said that the Oric-1 represents extraordinarily good value for money. To produce a 16K colour and sound machine, with Centronics printer interface and RGB monitor socket fitted as standard, at a price of under £100 is quite an achievement". He went on to reflect on the fact that the four models he'd looked at all had EPROMS instead of final ROM chips which meant that "it is impossible to recommend the Oric-1 unreservedly. When the final ROMs have been installed and bugs have been dealt with, and if Oric re-writes its manuals to a higher standard, then the Oric-1 should be a best-selling machine. It's just unfortunate that Oric should have set about marketing its product in this unprofessional and slap-dash way - it can do the company's reputation no good"[10]. The bugs referred to were in BASIC and didn't get fixed until the Oric-1 was updated and re-released as the Atmos in 1984.

There was also, in some quarters, a feeling that Oric wasn't doing all it could to support games. Personal Computer News wrote in its September 22nd 1983 issue that "Hidden inside the Oric is a game machine struggling to get out. The problem for software writers is that Oric has been reluctant to reveal just how the insides work. The result is a challenge to the games writers to find out all the tricks and special effects for themselves"[11].

About a month later, Oric announced that it was to launch a new machine to go after IBM's rumoured low-cost Peanut - the PC Jr. Although no-one quite knew what IBM's new machine would be, with Gartner's Tom Crotty suggesting that "It will be an Intel 8086-based machine - that is our best guess at this point. With IBM there is nothing sure until it is launched", Oric's Barry Muncaster was convinced that "The IBM Peanut will be hugely successful and set a standard and we will be there with it. Oric will produce a product which the Peanut will be compatible with"[12]. The Peanut surprised many by being a failure and it never even made it to the UK, whilst Oric never launched a competitor machine.

Meanwhile, in October 1983 Oric announced that 70% of its sales were going abroad, with 70% of those going to France, where Oric had shifted 35,000 units since February. This actually made it France's top-selling micro, even beating Sinclair. Back in the UK, things were less positive - 21,500 Orics had been sold since its launch[13].

The company received additional funding in early 1984 when it was acquired by Edenspring Investments Ltd, which gave it assets of nearly £5 million (about £16 million in 2023 terms) which were to be used to further develop Oric's products[14]. The targetting of Sinclair was such that Harding expected that "since [the Oric] offers more features than the Sinclair, the Spectrum will have its price reduced within a few months". Sinclair wouldn't have been too worried though as at the time it was running a three-month order backlog and had already shifted 200,000 units.