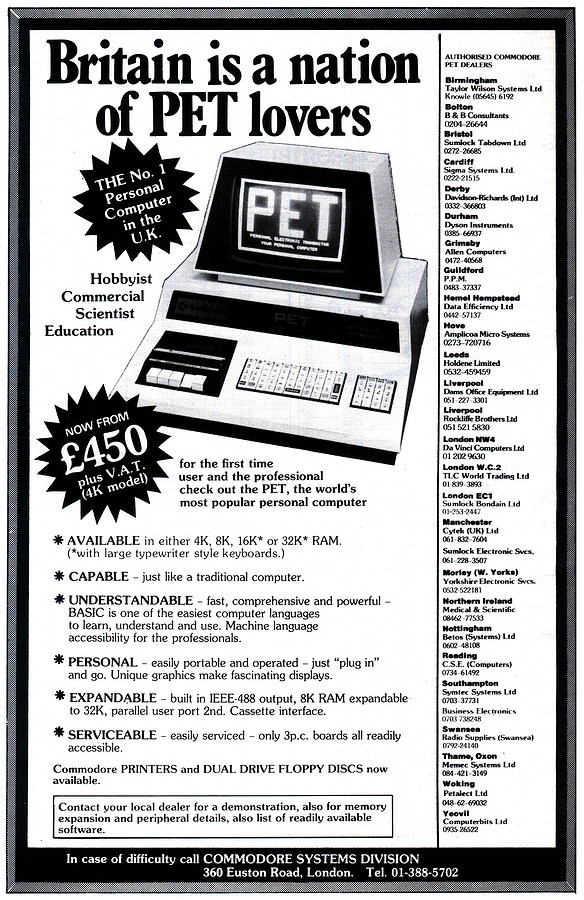 "Britain is a nation of PET lovers - the No. 1 computer in the UK"

An advert showing the original Chiclet-style 4K PET, retailing for £520 inclusive - about £2,910 in 2020 terms. At around this time, the newer 4000 series (16K and 32K models, with a proper keyboard) were also out, meaning that these older models were being targetted more at entry-level and first-time users.

The advent of the new model meant that it was possible to work around one of two well-known PET bugs. This particular bug, as demonstrated by Canadian PET software legend Jim Butterfield (author of "The First Book of KIM", aimed at the PET's predecessor - MOS Technology's KIM-1 6502 board) at the North London Polytechnic Computer Club, occured when writing in machine code, which Butterfield declared to be "still a nightmare" despite the availability of at least seven assemblers. If an assembly-language program was edited and a three-letter "op code" was turned in to a two-letter one and the left-over character happened to be a "2", then this was interepreted as a superbly-named "Halt and Catch Fire" instruction, which would result in a deadlock. The only way out was using the "reset" wire that the 6502 processor made available, but unfortunately this also wrote the character "A" in to every byte of memory by way of a restart test, destroying whatever program was previously resident. The fix involved some soldering and "some complex keyboard work" but would only work on the second-generation PET. The other, more conventional, bug would also result in a deadlock and involved giving an instruction to perform the previous instruction. From this there was no escape other than turning the PET off[1].