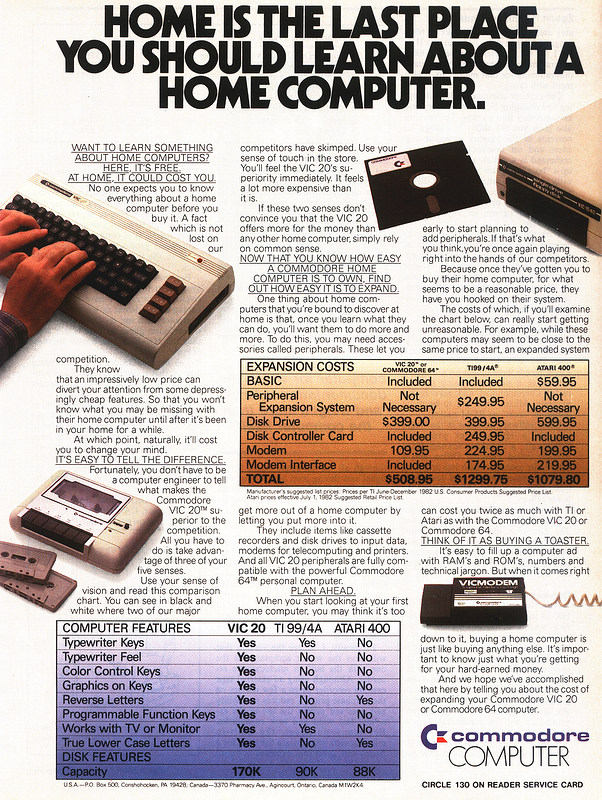 Although the Commodore 64 was on the market, there was still plenty of demand for the VIC 20, launched two years before in 1981. Even though the VIC was often considered to be very underpowered - it was basically a colour PET with a 1975-designed 6502 processor and 3.5Kb memory - it was by this time getting quite cheap at £150, or about £510 in 2020 terms, compared to its competitors, including its own progeny the C64, which was nearly three times the cost. Even Commodore initially expected the VIC-20 to fade gently in to obscurity following the launch of the 64 at the Hanover Computer Fair in April 1982. However, in early 1983 it was reported that the VIC-20 had still managed to sell 100,000 units in 1982 (it was second place behind Sinclair's ZX81, which sold 220,000 units in the same period) and that by October of that year a spokesman for the company said that it had "decided to increase the sales of the VIC-20" and that "we have now sold over one million units internationally"[1] - the first computer ever to do so[2]. Sales continued well enough until 1985, when production of the VIC finally ceased. The company also pledged to start manufacturing in the UK during 1983, as part of an attempt to break in to the lucrative educational sector where Acorn and RM had been doing solid trade. Use of micros in schools was subject to approval, at least in terms of government-funded purchasing, and Commodore wasn't on that list.

This advert majors on a comparison of how much it costs to add a disk drive and a modem to either the VIC/C64 (both could use the same peripherals), or its contemporaries the Texas Instruments TI99/4A or the Atari 400 (Commodore's founder, Jack Tramiel, would later be ousted from Commodore and would end up buying Atari). Disk drives, in particular, were nearly as expensive as the computer they were attached to - in this case, Commodore's own 1541 was on offer for $400 (about £910 in 2020), which was at least cheaper than Atari's $600. There's also the obligatory comparison table featuring "specially selected" points made to make the competition look naff, including "typewriter keys" and "typewriter feel" as two different entries. TI's total upgrade price of $1300 is a pricey £2,980 in 2020 money.

The specific mention of TI's TI99/4A is telling as that particular machine never did particularly well, but rumour had it that Commodore was out to get it anyway in revenge for TI's destruction of Commodore's calculator market back in the mid 1970s. The first of several prices wars that raged through the mid 1980s was officially kicked off by Commodore in March 1983 when it dropped the price of the VIC-20 to only $129 and the Commodore 64 to $439, down from $595, with rumours that it might drop to $395 before long. Commodore had recently taken an advert out in the New York Times claiming "Even if they gave theirs [Atari's 400 and the TI/99A] away, the Commodore VIC-20 would still be a better computer"[3]. TI, for its part, stuck it out for another year, before exiting the market in March 1984, in the same week as IBM's ill-fated PC Jr was launched in the US. By the end of 1983, it was being reported that Commodore had secured 43% of the US market for sub-$1,000 micros, with TI following with 23% and Sinclair (being marketed by Timex) trailing in at 9%. Commodore was also reporting record profits of $91 million on sales of $680 million - growth attributed by Jack Tramiel to "extremely strong demand for the 64"[4]. Meanwhile, Texas Instruments, Mattel and Atari were all reporting heavy losses.