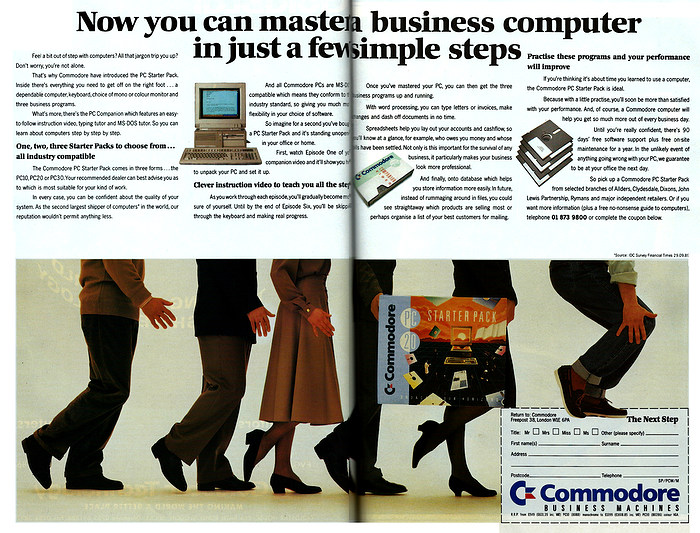 This advert is almost an epitaph for Commodore as well as the whole micro industry since the first "modern" personal computer, Commodore's own PET. From those first few machines through the explosion of micros in the early 1980s to the price wars of 1983-86 and the destruction of several well-known companies, but when something new and slightly incompatible with everything else would still be launched almost every week, to this - a victory for conformity in the shape of the "beige box", one of a seemingly infinite stream of almost identical IBM PC clones that had come to dominate the business market, and still do. It's interesting to compare the 1980 "Guide to Small Business Systems" which contained 900 different micro systems, to 1989's Computer Shopper which contained some 220 variations of the IBM PC from around 80 headline names and 140 lesser-known companies[1].

It was good to see that Commodore's poor press-relations were still intact, with many in the press seemingly tired of constant price adjustments to Commodore's line of PCs. In April of 1989, the year before, Computer Shopper wrote "It is a truth universally recognised that if Commodore goes more than two months without announcing a change to its PCs, then just such an announcement will occur within days rather than weeks". The comment followed a reduction of some £500 on the 386-based PC60 and £80 off the entry-level PC10, which was now at £599 (£1,560). The problem with the constant price changing, re-positioning of machines or tweaks to specs - often accompanied by vacuous phrases like "a new strategy" or "major re-assessment" - was that it gave the impression of a company that didn't quite know where it was at and which "smacked of both desperation and arbitrariness". Computer Shopper continued that it looked like Commodore's PC strategy was being "made up as it goes along, the only strategy being that if one strategy doesn't work another one will be along in a minute, much like a bus". It posited that the eventual outcome of this process would be the announcement of its PC20 XIII being priced at tuppence[2].

Although Commodore's PCs were recognised as well made, they were, well, just another PC. But then so was everything else, apart from the few rogue outliers like the Amiga. Commodore would release several more versions of the Amiga as well as the CD-TV before filing for bankruptcy in 1994.