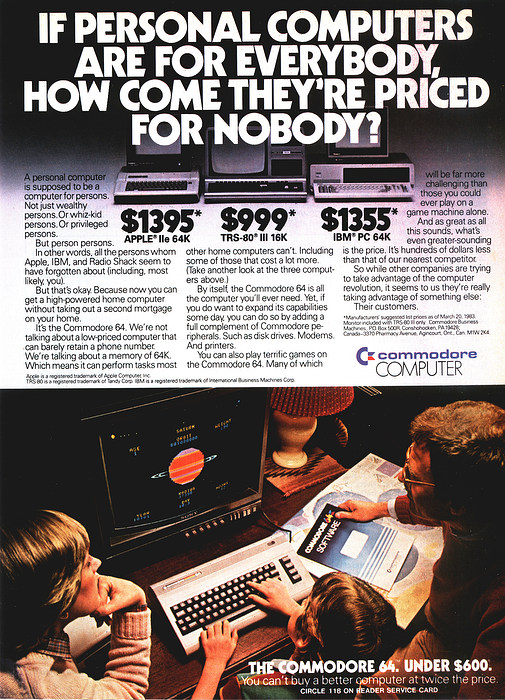 Another Commodore advert, from August 1983, playing to Jack Tramiel's famous adage "Computers for the masses, not the classes". The origin of this famous quote dates back to 1980, which Michael Tomczyk - a Commodore insider - recounts in his book "The Home Computer Wars". Tramiel said "We have to be a mass-market company. I want to bring down the price of computers, like we did with calculators... we're spoiled. We have to learn to live on a diet. We have to sell to the masses, not the classes"[1].

Creative Computing, the magazine that this ad appeared in, was bought out by mega-publisher Ziff-Davis at about the time that this advert appeared. Another of Z-D's magazines - 'PC' - had recently claimed a record by producing the biggest magazine of all time in the US, with an edition that weighed 2.8lbs (1.3kg) and contained 640 pages, of which 407 were of adverts. Z-D also claimed the largest computer magazine circulation in the US, with "Computers and Electronics" shifting 700,000 copies a month[2].

Meanwhile in the Autumn of 1983, in the UK, Commodore was getting in to trouble with its pricing strategy. Having been largely responsible for the price wars raging during 1983, it tried to halt the trend by enforcing RRP pricing with its dealers. This earned the company a referral to the Office of Fair Trading from retailer Crestmatt, which was offering the Commodore 64 at a massive £4 below the recommended price of £199.95 (£680 in 2021). Mike Mehdi of Crestmatt had alleged that Commodore had threatended to "cut off his supply of machines" if he didn't raise the price. Furthermore, Mehdi also suggested that Commodore would only grant him a continued dealership if he grassed up his source of micros, saying "The only way we can compete with the High Street stores is on price, by cutting our own profit margins". Commodore totally denied any wrong-doing, saying that "We have no quarrel with Crestmatt - it is the person he is buying from we are concerned about. It is conditional on our supplying people that they adhere to our terms of business". Mehdi retaliated by dropping the price of the 64 further down to £184.95[3].