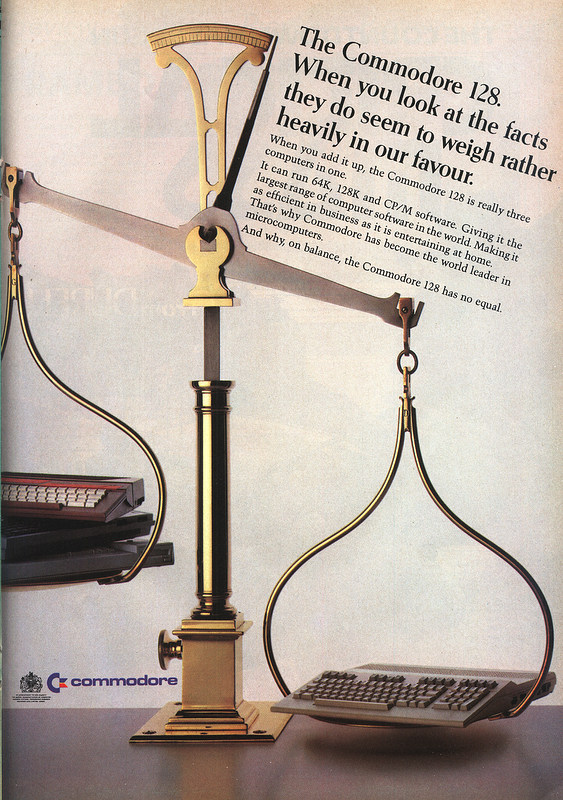 The Commodore 128. When you look at the facts, they do seem to weigh rather heavily in our favour.

The 128 was Commodore's last 8-bit computer and was released in 1985, although news of the 128 started appearing at the end of 1984, with Popular Computing Weekly saying that "Commodore is working on a new up-market home micro, intended as a direct competitor for the Sinclair QL"[1]. It remained almost entirely Commodore-64-compatible as its 8502 processor was compatible with the 64's 6510, although it could also run at twice the speed in a pure C-128 mode. The "almost"-ness of the 128's compatibility became apparent towards the end of 1985, when it was discovered that a few software titles wouldn't run, even in C64 mode. Much like how Sinclair's minor change to an un-documented area of memory broke some games, so too had Commodore's tweaks to a display chip caused problems. Commodore UK programmer Mark Palmer explained "There are two additional registers at the end of the video chip. These were normally invisible in C64 mode, but some programs may have written over them, although they should not have". There also appeared to be some issues with turbo tape loaders, including in the popular Frankie Goes to Hollywood, but the only solution offered was to contact the software company, on the off-chance that an updated version had been released[2].

The 128 also had a Zilog Z-80 processor for running CP/M programs, although an unforseen problem with the machine's CP/M implementation threatened the earlier-than-scheduled delivery date. These issues seemed to be resolved in time for the machine to start rolling off the Corby production lines in time for the machine's official launch[3]. However, following the announcement of Amstrad's 6128 and 8256, Commodore had to do a bit of a re-think on its pricing and so held off the official mid-September 1985 launch for a few weeks so that it could be offered with a cheaper 1570 floppy disk drive - a unit more-or-less identical to the 1571 but with only a single-sided mechanism. The combined price was still £70 more than Amstrad's 6128, which as well as a built-in floppy also included a monitor.

The 128 is considered unique due to its motherboard holding four differently-accessed kinds of RAM, three different CPUs (the 128D had a 6502 to control its floppy drive) and two different video chips for its various operational modes[4]. Its new case design was also used by a version of the 64 - the 64G - released in 1986 and which was part of a revamp intended to "give a new lease of life" to the cash-cow that the 64 remained.

Following the 128's launch in the UK at September 1985's Personal Computer World show, Chris Kaday - Commodore UK's new marketing manager - said "We confidently expect that at £269 the machine will be a winner this Christmas and the level of interest from prospective new users, both for home and business as well as existing 64 owners seeking an upgrade path, certainly supports this view"[5]. Despite these potential kiss-of-death words, the C-128 eventually sold reasonably well and shifted 4 million units, although its price had to be swiftly cut in the face of the competition from Amstrad's 6128 in the UK, no less than twice in the first few months after its official launch[6], and its intended use as a low-end business machine didn't really materialise on account of the availability of cheap IBM clones. In the UK, it also suffered from some early "teething problems on the C128 production line at Corby"[7].

The Personal Computer World Show should have been an opportunity for Commodore to preview its new Amiga, however Popular Computing Weekly accused the company of paranoia when it failed to do so, reckoning that Commodore thought the Amiga's presence would detract from the real "star" of the show, the C128, even though the former was about five times the price, saying that "Commodore almost gives the impression of lacking confidence in the C128". The magazine's editorial of the 5th September also accused Commodore of playing safe since the failure of the Plus/4, which had accounted for a large chunk of Commodore's losses, implying that failure had frightened Commodore so the company had retreated into a blanket of C64 compatibility. Editor David Kelly wrote "How can [the C128] fail - it has C64 compatibility and adds CP/M? Yet the Plus/4 failed because it was technologically run-of-the-mill. The C128 is not a significant technological advance... and being two micros in one is both an expensive way of running C64 software and an expensive way of running CP/M software. the problem is the C64 is just too successful and is proving a hard act to follow"[8].

Lower sales of the 128, compared to its ancestor the 64, were also partly explained by the reduced number of outlets the 128 was sold through. In its heyday, the 64 retailed through 15,000 stores in the US, whilst the 128 was selling through a third fewer, or around 10,000 stores[9]. The arrival of the 128 did appear to kill off one part of the 64 market though - that of the erstwhile C64 CP/M cartridge. Although hard to find and unsupported by Commodore in the UK, the cartridge had been available for some time in the US, but rumours of incompatibility with some issues of the C64 persisted and a general lack of software - Commodore didn't release any CP/M software for the 64 - led to the cartridge being quiety dropped. As Commodore Horizons suggested, "In order for the 128 to have a clear market advantage it would be sensible for Commodore to pull out of 64 CP/M"[10].

By the beginning of 1986, Commodore was offering a trade-in deal on the 128, with £50 off when swapping a C64, or a Datasette when trading in any other make of micro. Commodore User made the observation that these dressed-up price reductions were much needed, given the competition from Atari and in particular Amstrad, although according to Commodore's UK marketing boss Chris Kaday it was because Commodore "wanted to make it easier for people to upgrade". However, once again, Commodore managed to annoy their dealers, some of which were complaining of "getting a raw deal", plus there was the added hassle of returning loads of "mouldy micros" back to Corby[11].

Also during 1986, Commodore was promoting the 128 as a means to access its recently-unveiled QuantumLink network - a complete dial-up service with email, bulletin boards, news and downloadable software, a lot of which was free public-domain. QuantumLink was available for a flat fee of $10 per month, which compared well with CompuServe's $6 per hour. Commodore was aiming at the 3.5 million Commodore users in the UK (out of six million worldwide) and was offering a free modem and two months' trial subscription to QuantumLink with every 128 purchased. The on-line system, which launched in November of the previous year, was already up to 10,000 subscribers[12].

In the UK, the 128 had some serious competition in the form of Amstrad's CPC 6128 and its upcoming model the P‍CW 8256, which featured in the Personal Computer World Show at the end of 1985 and which, according to Guy Kewney, "really summarised the feeling of optimism and excitement" that many people found at the show - presumably in part because the move to 128K machines had provided something of a boost to the ailing micro industry. The Amstrad machine also made Commodore's 128 look a little "foolish" as the cost of the 128, after taking in to account the extra disk drive, printer and monitor needed to match the spec of the P‍CW 8256, was nearly double that of the Amstrad. Commodore, meanwhile predicted that the Amstrad was "unlikely to sell well" because, according to Commodore UK's MD Nick Bessey, it "wasn't going out through the dealer channel" and so wouldn't have the same level of support that Commodore's 128 had[13].

Of course, bravado over Amstrad was somewhat misplaced as whilst Amstrad was announcing profits and was being valued at £500 million, Commodore was faced with its biggest losses yet as it announced a pre-tax loss of $36.7 million (£24.7 million or £73 million in 2020) for the first quarter of 1986. As the company was planning another major push for the 64 it was also revealed that European sales were still doing well, up 53% on the previous year to $98 million. This accounted for more than half of Commodore's entire global sales and led to chairman Irving Gould declaring sales in the US as "disappointing". Meanwhile, the Amiga was not yet making too much impact, although Kaday claimed that the "phones are buzzing" and that the first UK shipment of 1,000 machines had sold out in the first week[14].