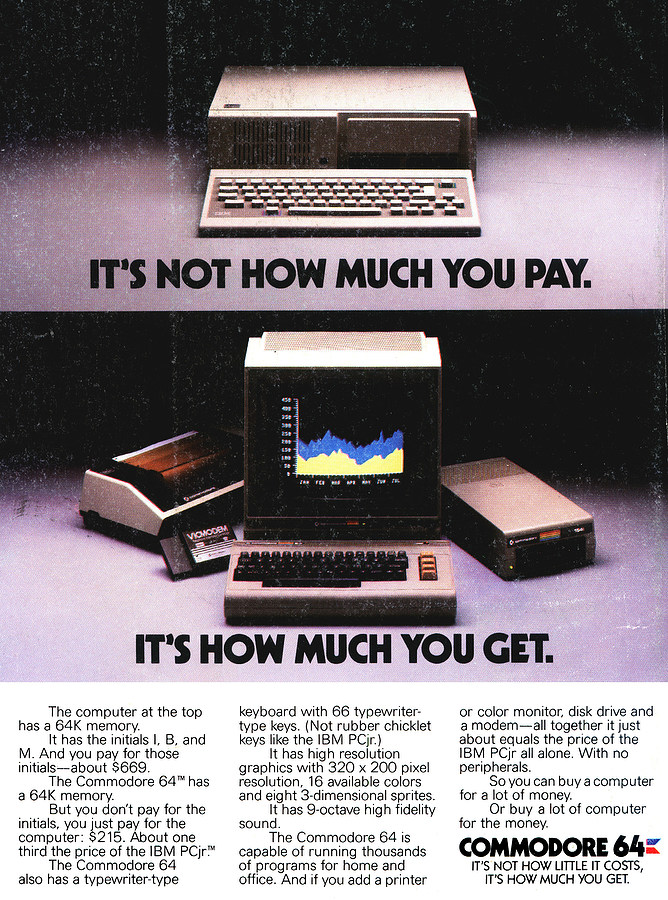 In the era of the IBM PC, this Commodore advert compares the price and features of the Commodore 64 and the IBM PCJr. Known as the "Peanut" (IBM's code name), the Junior was never released in the UK and was canned by IBM in the US after only 18 months - even Apple's updated version of its 1977-launched machine, the IIc, had grabbed twice the market share of the IBM[1], although there were conflicting reports that the Jr. was damaging Apple's sales, especially as when it was cancelled, IBM were thought to stil have 100,000 units in warehouses, all of which could be pushed in to the market at reduced cost for a quick sale[2]. 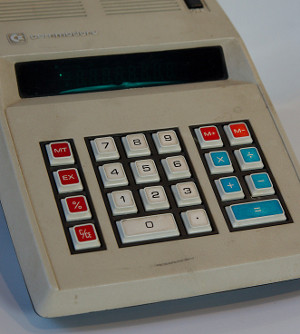 Commodore's US*5M calculator, clearly showing the same keys as used on the original PETIt had been released in January 1984 and positioned by IBM as a lower-cost educational and home-use machine and sold for $669 (and even that was down from its $1,269 (£2,650 in 2020 prices), but by this time the C64 was down to $215, or about £470 - a third the cost of the IBM. Although pitched at the home market, business users "said it lacked power" and typists "hated the chiclet keyboard" (Commodore's first computer, the PET, used chiclet-like keys that were left-overs from its desktop calculator models, such as the US*5). On the face of it, the C64 did have significantly better specs (even though it was a couple of years old already) which was perhaps shown by the fact the the Jr. was discontinued in 1985 but the C64 went on for a total of 12 years to 1994 (and the end of Commodore). An impressive feat really, especially as no significant update was made to its hardware.