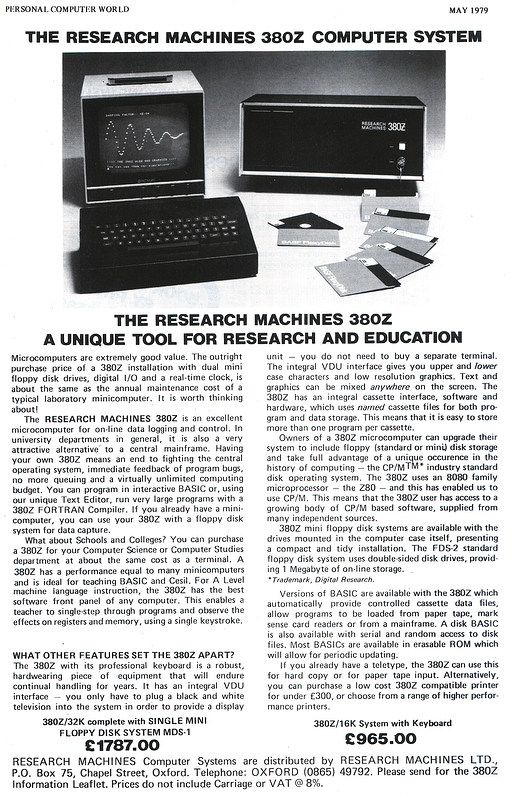 "The Research Machines' 380Z - A unique tool for research and education"

From at least 1978 through to mid 1982, Research Machines Limited, often abbreviated to RML, seemed to be selling the same one machine - a Z80-based system called the 380Z. It had been advertised under the "Sintel" banner since early 1977 with the first prototypes being released in August of the same year and production models appearing from December, making it one of the first British micros to go in to production[1]. It came in a base-unit-and-keyboard configuration, ready to plug into a handy black-and-white television or monitor (as the advert shows). With a floppy, it retailed for £1,930 including VAT (about £10,800 in 2021 terms) and was aimed at the education and research market. For the budget-conscious, there was also a little-advertised £400 (£2,420) version, consisting of just the CPU and VDU boards, called the 280Z.

The machine reviewed very well in April 1978's Personal Computer World, with Mike Dennis concluding that "the product was excellent - the boards really are a work of art - and there were many innovative and ingeneous design features. Much thought has gone in to the design to make it as flexible and easy to interface to as possible. Any business, firms, institutions, schools, etc, considering buying a good all-rounder could do a lot worse than take a long hard look at any of the RML [machines]"[2].

By the end of the 1970s, computers were already being seen as a de-facto solution to educational problems, even though this ignored the fact that improving education is far more a social/political issue than it is a technical one. Technical problems are easy, given enough resources, but the question was often asked "How can we go to the moon when we can't design a better curriculum or provide a better healthcare system?"[3]. Furthermore, there were also worries that much of the early focus, where there was any, seemed to be a teacher-centric one which "takes as its model the activities of the classroom teacher - presenting information, testing, supervising drilling-and-practice and keeping marks", rather than trying to develop a more child-centred approach which allowed the child to use a computer as "a powerful tool with which to explore and manipulate the world". The risk that was the "current orthodoxy" of the Government's ongoing £9 million programme - first announced in June 1980 and which by early 1982 (the Information Technology Year, IT82) had become known as the Microelectronics Education Programme - which had by necessity laid down a rigid framework for evaluating potential projects, would ossify and be unable to respond to rapidly-changing educational needs[4].

When micros first started appearing in schools, there was a significant lack of coordinated policy, with central government and local education authorities clearly ignorant of the impending revolution and teachers "sensing the value of computers as a teaching aid" but lacking clear guidance on how to make use of them, and for what[5]. This also meant that instead of central purchasing, each school was buying whichever random machine the one teacher in school who knew about computers recommended or one from whichever manufacturer made the most persuasive sales pitch. It could be argued that it took the BBC to sort this out when it launched its Computer Literacy project in 1982, as this ended up putting the BBC Micro in many schools and eventually spurred the mandating of the BBC, Research Machine's 480Z and Sinclair's Spectrum as the only choices if schools wanted to make use of generous 50% grants available throughout the early 1980s[6].

Education also seemed to be capable of enabling humanity to become "one" with the machine. Writing in Personal Computer World in the Spring of 1978, product developer for a large computer manufacturer William "Bill" Ringer suggested that "as a consequence of microprocessor technology, we are now about to witness another revolutionary step forward. Our future generations will not only have the ability to read, write and perform arithmetic but also to express relationships and solve problems through languages of logic. Most commonly, everyone will be familiar with at least one programming language. Only through the widespread popular understanding of the languages of logic can we protect our personal values and rights from the encroachments on those freedoms resulting from programmed implementations of laws and procedures by narrow-minded technologists. An individual's freedom is determined, to some extent, by his ability to access information"[7]

In early 1982 RM launched its 480Z Link system as a way of connecting multiple 380Zs together. With networking initially developed in-house, RM switched to Zilog's Z-Net when that company announced that it would be available to third-parties under licence, an easy switch given that RM's own networking system was already fairly similar. The 480Z main workstation was a Z80A machine with 32K running CP/NET but could be used as a stand-alone machine with the addition of a cassette for storage. Meanwhile, The Z-Net system was being used by another British company to run a pioneering hotel room control system. Automatic Revenue Controls Limited of Watford had rigged up its Guest-key system at the Grosvenor House Hotel in London as an entire network with a micro in every room of the hotel, all linked to a central computer and which controlled the door locks and ensured that the lights were turned off when guests left the room. Keys, which used a sequence of notches along the edge, could be assigned to a particular room or act as a master key, all of which could be re-assigned should a key get lost.