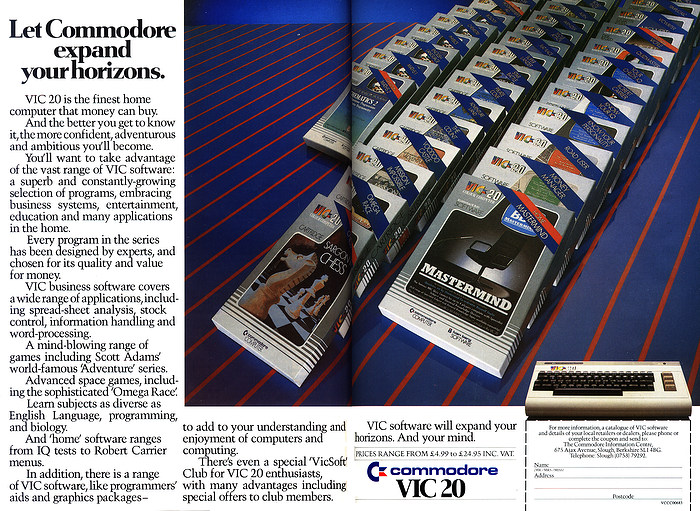 Even though the Commodore 64 had been launched the year before, the VIC-20 was still shifting units (selling over 2.5 million before it was discontinued in 1985), mostly thanks to being very cheap. During 1983 as the price-wars with TI and Atari were getting in to full swing, the VIC was down to $85 with rumours that it may go as low as the give-away price of $30 by Christmas. The low price of the VIC didn't seem to bother the 64, which was down to $288[1] after a rebate of $100 given in exchange for any old computer or video game, whether it worked or not. People would even buy new Timex 1000s (Sinclair ZX81s) at $50, trade them in for a 64 and still make $50 on the deal[2]. The 64's price of under $300 was half the price the previous September, but by this time the VIC had been clearly repositioned as an entry-level/beginner machine in order to avoid cannibalisation of 64 sales.

Interviewed in April 1984's "Compute!'s Gazette", Myrddin Jones, former head of marketing for Magnavox's Odyssey game system[3], now VP of marketing for Commodore's computer systems division and the man who came up with the trade-in rebate scheme, when asked whether the VIC-20's sales had begun to taper off since the 64 was introduced said "Well, naturally they would. We started emphasising the 64 last April [1983, around the time of this advert] because we felt there was a need for a 64K machine. However, the VIC-20 has been very steady, and we're still getting good orders from everybody. We'll continue to sell it as long as the customer buys it. We think there's a place for a starter computer at under a hundred dollars"[4]. In the same interview, mention was made of a possible 16K VIC upgrade, to which Jones replied "[the idea] has been kicked around, but I don't think any decision's been made. [The VIC-20 is] a good seller". There never was a 16K VIC (not counting a regular VIC with a 16K plug-in expansion cartridge), although only a couple of months later, at the 5th International Commodore Show in London, the Commodore 16 was announced to the UK. This was really a cut-down 264 a.k.a. Plus/4 as it shared the same 7501 processor, 40x25 121-colour graphics, sound and Version 3.5 BASIC[5].

The advert itself nicely shows the large range of cartridge titles that had built up in the two years since the VIC's launch in 1981. These games or utilities were burnt on to ROM and so were able to load instantly on power-up, and also - because they had their own program memory - they could get around the 3.5K limit of the basic VIC. The Sargon II Chess cartridge, written by Dan and Kath Spracklen for instance, had 16K on board. These are all Commodore's own titles, many of which were produced by Michael Tomczyk's "VIC Commandos" team, by then installed in Commodore's new Moore Road, Pennsylvania office, in readiness for the June 1981 CES in Chicago[6]. Ultimately, some 300 software titles were made in cartridge form for the VIC, along with more than 500 on tape, in an era where software was really starting to expand as a thing in its own right. In 1983 sales of home computer software increased five-fold compared to the previous year[7] and by 1983 Commodore alone had sold over a million tapes. 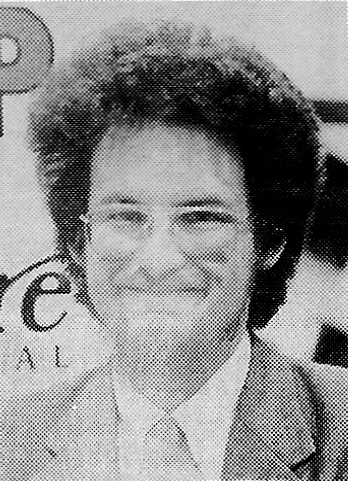 Scott Adams, © Popular Computing Weekly, 15th March 1984Also showing in the pile of cartridges is Voodoo Castle, one of a series of text adventures produced by Scott Adams Computers. In 1978 the eponymous Adams had been working on digital telephone-exchange switches at Stomberg-Carlson in Florida and had been interested in an early adventure game called, er, Adventure, written by Willie Crowther and Don Woods. Frustrated by the inability to actually play the game against friends, who weren't allowed anywhere near the expensive company mainframe, Adams wrote a version at home on a TRS-80. The end result was nearly lost when his late nights annoyed his wife Alexis so much that shew threw the finished disk in the oven, however it wasn't switched on and the game survived its non-roasting and was subsequently released - initially being posted out by hand, sealed in baby-bottle liners. Adams had set up the original game using his own game interpreter, which allowed his wife - a non-programmer but by now an adventure-game convert - to write some of the subsequent games and most of Voodoo Castle. By the end of the 1970s, these games (which Adams referred to as "fantasy computer novels") had been translated from the original Tandy to the Apple II before subsequently being converted for Commodore and Atari, and it wasn't long after that that the couple had made their first million dollars and had opened the first shop in their retail chain, which by 1983 was known as Adventure International (AI). AI employed 60 people, all managed by Alexis Adams Incorporated[8].

Several of Commodore's other cartridges came under legal fire from Atari, with Space Invaders having to have its name changed to VIC Avengers (in this case only the name was trademarked so the game remained unchanged and more-or-less identical to the original). The VIC version of Pac Man changed to Jelly Monsters when it was sold in the UK, Rally-X changed to Rat Race and Midnight Drive changed to Road Race. There was also a threat of piracy, which by 1983 was becoming something of a serious problem, although as usual companies were misleadingly calculating losses by simply multiplying estimates of copied software by sales value in order to inflate the exact scale of the problem. However losses were real and by the summer of 1983 even VIC cartridges - previously all-but immune to copying - were at risk thanks to the launch of a device called Softswitch. This worked by intercepting any ROM cartridge that was plugged in to it and relocating its location in memory to somewhere under its control, in the process subverting the cartridge's own auto-start. This allowed the contents of the cartridge to be written to tape or disk, which was clearly a concern to Commodore, with software manage Gail Wellington saying to Popular Computing Weekly "Certainly I will take legal action against anyone selling pirated copies of one of our programs, but to take action against individual users making copies for their friends is much more difficult". She continued "The sad thing is that the only people who will lose out with things like this will be the individual software authors - we will have to take increasingly more complicated steps to protect our software and that, inevitably, will mean smaller royalties for authors".

One of the counter-measures Commodore could bring to bear was already in use on its Commodore 64, which used RAM-backed ROM and so was already at risk. On the 64, the ROM would write all over itself which - being read only - didn't matter, but it would mess up an in-memory copy that was somewhere it wasn't supposed to be. Thorn-EMI, which also sold cartridges for the VIC-20 as well as Atari's VCS/2600 weighed in when hardware manager Peter Chandler said "We are quite shocked. It is inevitable that people will bring these things out" before adding that it protected its software in the same way as Commodore, which meant that although not impossible, any potential pirate would have to do a huge amount of work to re-construct the program before it was copyable. As Chandler concluded "Hopefully, we will have been devious enough, because the law gives us no protection"[9].

Commodore had also been worried about lower-tech pirating, via the usual suspect of home taping which was being apparently encouraged by the spread of software libraries and exchange clubs, which were proliferating in 1983. Commodore's marketing manager John Baxter commented that "Stopping individual libraries is very difficult. Industries much larger than our own - the record and video business for example - are trying hard to fight a similar sort of problem and are failing, so there is no easy solution". He continued "At the end of the day, we have to stop the whole process of home duplication and the industry must get together and develop a system to fight it". Commodore had the option to concentrate on its cartridge-based software which, despite the existence of things like the Softswitch, was still generally more secure, but it also had a fairly unique chance to mess around with its dedicated C2N "datasette" recorder - as used on everything from the PET up to the 64. As Baxter expanded "We are looking for a method of using a data cassette in such a way that if you copy the cassette on a domestic recorder you will get a corrupted tape program"[10].

Despite the trumpeting of the large range of Commodore's own software, there was still a worry at the end of 1983 that very few other software houses producing were producing software for Commodore's machines, in contrast to the apparent hundreds doing so for the Sinclair Spectrum. This was so much so that the newly-launched Commodore Horizons magazine started a campaign in its first-ever issue to get readers to write in with their requests for programs, with the magazine collating the results monthly and forwarding a list of names to around 100 software companies that it believed were not writing games and programs for the VIC-20 or C64[11]. Perhaps the campaign even worked, as by the end of its life the C64 in particular had accrued some 6,000 software titles.

In June 1983 Commodore Computing International published the results of its home computing survey, which revealed that the VIC-20 held joint-third spot in the popularity stakes at 18.34% of the market, alongside Acorn's BBC Micro. Sinclair held the top spots with its ZX-81 at 25.8% and the Spectrum at 22.5%, whilst Commodore's 64 - released the year before in 1982 - was still way behind at 7.5%. The combined value of the market was at that point estimated to be around £300 million, given that over 1 million micros had been sold in the UK. The same survey revealed that of the 77.5% of respondents who claimed they had mastered their machine, 11.7% had taken a year or more to do so. Perhaps this was related to the fact that only 30.8% of owners were happy with the standard of manufacturers' manuals[12].

In the US, Commodore was waging a price war with Texas Instruments and had already dropped the price of the VIC-20 bundle to the UK equivalent of £130, although some US dealers were apparently splitting it up and selling the VIC and the tape deck separately - as Popular Computing Weekly pointed out, if this happened in the UK it would mean that the VIC could be available for as little as £70, or only £240 in 2021. The equivalent price-cut in the UK happened in the month of this advert - June - with the VIC bundle, which included the C2N Datasette and "probably a ROM cartridge", all of which was accompanied by Commodore's biggest-ever promotion with a marketing budget of some £250,000 - retailing for no more than £139 - the previous cost of the VIC by itself. This was perhaps a nod towards Sinclair's drop of the Spectrum to around the same level in May, although Acorn's Chris Curry was not slow in claiming both competitors' price adjustments as "a reaction to the impending launch" of Acorn's much-delayed £150 Electron. Curry said "We quite expected the Sinclair prices to drop prior to the Electron's launch. The Spectrum cannot compete with the Electron's superior performance in the same price bracket"[13].