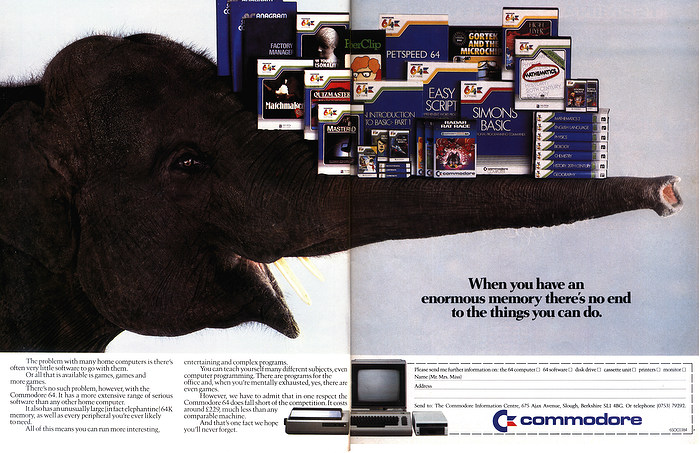 "When You Have An Enormous Memory, There's No End To The Things You Can Do"

From the time when 64K was still quite a lot of memory for a home computer, comes this advert from Commodore featuring a cute baby elephant with a whole pile of software piled on its outstretched trunk. There are a few "elephant" metaphors sprinkled around for good measure, too. The elephant in the ad is quite possibly "Maureen", a circus elephant which Commodore had also used in a TV advertising campaign during 1984 and which which it had got in to trouble, thanks to protests from animal lovers across the country. The Independent Broadcasting Authority (which was responsible for adverts on the UK's independent TV network before the launching of the Advertising Standards Authority) ended up banning the adverts, which didn't affect Commodore too much as it had no plans to use them again. Even so, Commodore had taken the matter seriously and asserted that it had checked with the RSPCA before it filmed the advert, which featured Maureen balancing on a stool, saying that "there is no way that we would consciously set out to offend public taste or subject an elephant to cruelty"[1]. 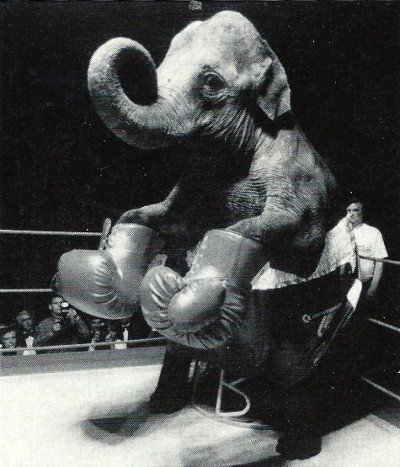 Maureen the Elephant in the controversial advert, © Personal Computer World March 1985Initially launched in the US during 1982 with a suggested retail price of $595 (about £1,490 in 2021 terms) the price of a Commodore 64 had now dropped to £229 - only £30 more (in face value) than the VIC-20 when it was released in the UK in 1981 - that's about £750. When it first launched, there was a lack of software available for the 64, a situation which led to complaints from dealers, but by June 1983's Chicago CES, the situation had improved somewhat with products like Magic Desk coming from a team of engineers headed by PET veteran John Feagans and a sophisticated word-processor called Easy Script coming out of Commodore UK's software tentacle. Infodesigns' business accounts package was also licenced and was sold for the bargain price (for a product of its type) of $99[2]. Also featured in the advert half way long the trunk is Simons Basic, considered by many inside Commodore as a vast improvement over their own company's somewhat hostile and "noticeably inferior" BASIC, the latter comment coming from Personal Computer World's Guy Kewney when comparing it to Acorn's well-regarded (and structured) BBC Basic[3].

Software was becomming increasingly important, not just as a way of encouraging the sales of machines but as a source of revenue in its own right. Gail Wellington, Commodore's software manager said of the threat posed by the new Amstrad CPC464 that "I don't think we have anything to fear. It all depends on the software available and whether they can supply the goods or not"[4]. Meanwhile, a study published in 1984 by EIU Informatics and available for the bargain price of £1,100 per copy (£3,620 in 2021) revealed that software sales in 1983 had increased by 170% over the previous year and were now worth £127 million (£560 million). It also showed that 85% of all software sold in 1983 was used with a micro costing less than £2,000, which at the time essentially meant a home computer of one sort or another, although a few IBM-compatibles like the Advance 86a were coming out at under £1,000. The study also hinted that software would become increasingly important in the purchase of microcomputer systems, showing that 24% of the value of a system in 1981 was software, but by 1988 this would be almost 75%[5].

There were however also concerns that 1984 would see a new price war in the software industry which might trigger a repeat of the 1983 video games crash. Imagine Games, the Liverpool-based company that split out of Bug-Byte, announced a price drop of its games from £5.50 (about £19) down to £3.95, before quickly back-tracking, citing worries that "a substantial demand for games would be offset by the effect it would have on the software industry", meaning that smaller software houses would be forced out of the market. This didn't stop some new entrants like Mastertronic and Atlantis both offering games for £1.99 (£6). Derek Meaking, head of National Micro Centres, added some doom by warning that cut-price software could "result in the British software industry sliding in to mediocrity" and would lead to the industry "cutting its own throat"[6]. The introduction of cheaper software also caused several of the big players to throw a tantrum, leading to its exclusion from computer games charts. However, before long and with a sense of inevitability, U.S. Gold joined the fray by launching its "Americana" range of bargain titles. When asked by Commodore User if the company would be "upset if the games were excluded from the charts if they became hits", U.S Gold's Tim Chaney replied somewhat snarkily "we made our stand and we're sticking by it. These kind of games don't deserve chart recognition"[7].

By the spring of 1986 with the advent of the Atari ST and Commodore's own Amiga, legions of 64 owners (there were 3.5 million Commodore owners in the UK at the time[8]) appeared to be getting nervous that their machines were about to be abandoned when it came to new software, a view reinforced by a comment to that effect from Trip Hawkins, the head of Electronic Arts in the US. However, other US-based software houses were taking a more pragmatic approach. In a visit to London to announce plans to increase its UK presence, simulator company Micro-Prose's head Bill Stealey said that the rumours of withdrawal from the 64 market were untrue and that "we will be developing Amiga and ST games, but our main priority for the forseeable future is to the 8 bit machines, and that means the Commodore 64". Stealey also had a bit of a dig at the new crop of bargain software around when suggesting that the simulator market was about to explode. He said "We have to educate the public. They are currently confusing cheapness with value for money. One of our simulations can keep you hooked for literally months, whereas you will tire of a £2 shoot 'em up in an afternoon"[9].

In between the first rumours of the 64's announcement at the beginning of 1982 and actual details appearing, there was some interesting speculation about that exactly the Commodore 64 might be. In particular, there was some comparison between the 64 and the Apple II, with it said that the 64 would be able to run Apple software, at least if it was typed in if not directly from disk. This was at least slightly plausible because the two machines shared a common-enough CPU, with the 64's 6510 being a broadly-compatible derivitive of the venerable 6502 used in the Apple. This potential capability got a bit fancifully extended by suggesting therefore that Commodore might even offer a low-cost Apple II emulator for the 64, and why stop there? There was a suggestion that the 64 was therefore the basis of a range of modular emulator systems and that Commodore might then offer emulation of all the major systems of the day, including IBM, Tandy, Sharp or NEC. With an expected cost per emulator card of about $1,000, it looked possible to build a single machine that was "universal" for around £3,500. As one US stock analyst had apparently observed, "if Commodore actually goes through with what it appears and is rumoured to be planning, it could dramatically change the shape of the microcomputer business, for it would have at last bought the hardware side of it down to the level of becomming an irrelevance" - or a commodity item like a can of beans[10]. Needless to say, none of this actually happened, although the Commodore 64 did in its own way shape the industry, by becomming the most popular 8-bit micro of all time.