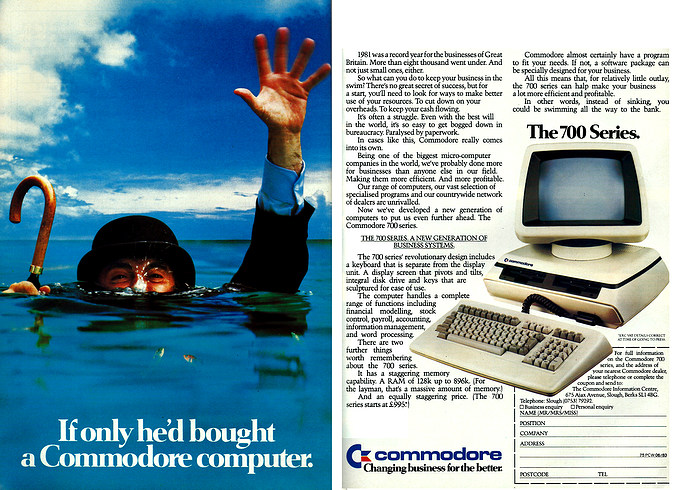 If only he'd bought a Commodore computer

The Commodore 700, and its cheaper sibling the 500, were short-lived entrants in Commodore's business range. Confusingly named as the B128, B256 or CBM 128/256-80 in the US or the 700 series in Europe, the larger of the pair was aimed squarely at the business market with its built-in disk drives and 80-column display. The 500 (or P-series in the US) was aimed more at the home market with its VIC-II chip, joystick ports and SID chip (as used in the Commodore 64) for sound. Collectively known as the CBM-II range, as a reference to their place as an update of the original CBM PET line, they are also often referred to as the "Porsche PETs" even though they were designed by Commodore's regular industrial designer Ira Velinsky. This confusion even appeared in the press, with a review of the 8296 PET (which used the same case design) referring to the "new Porsche-styled look, originally created for the now-discontinued 700" and in a reference to the new case versus the older tin box-shaped machine saying that "the Porsche body hinges at the back, not the front"[1]

Commodore seemed to have problems marketing these machines, as although they were first released in 1982, they were still not widely available a year later (or at least Commodore weren't letting Personal Computer World have one so they could benchtest it). Nevertheless, Colchester-based Dataview had already released a compiler for the 500 and 700's Commodore BASIC, which was said to produce programs that would run up to 55 times faster than interpreted source[2].

The machines seemed to undergo several re-launches, but were discontinued a year later in 1984, with stocks of the 700 being sold off at bargain prices. This upset software houses which had invested heavily in developing software to "take advantage of the machine's special features" and were no doubt desperate to recover their costs. Karl Dallas, writing in Commodore User suggested that "the point is that when you are dealing with a company whose marketing of new products seems as capricious as Commodore's, the merits of any given machine may have little to do with whether it goes or stays"[3]. In the same article, Dallas had suggested that the 700 had been "brilliant".

Perhaps the time for 8-bit, BASIC-based business machines seemed to have passed. 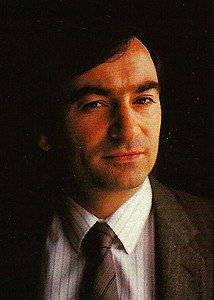 Bob Gleadow, MD of Atari UK, © Popular Computing Weekly, June 1989Meanwhile, in the summer of 1983, it was announced that Robert Gleadow, General Manager of Commodore Business Machines (CBM) UK had been posted to Hong Kong to head up Commodore Electronics Limited - a move that was sometimes considered within Commodore as the equivalent of being exiled to the Siberian Gulags. Gleadow had previously moved to the US with Kit Spencer in 1980 in order to sort out Commodore US's marketing, which was seen to be failing compared to that of Commodore UK. Gleadow's replacement as of 25th April 1983 was Howard Stanworth, a seasoned manager who had previously held positions at Excelsior Plastics, Rank Organisation's consumer electronics group, St. Ivel and Unigate Dairies[4]. Stanworth came in at a time when Commodore had reported that its massive concentration on home computers - at the expense of its business machines - had resulted in a 131% increase in sales in the US for the period ending March 1983 to $189.6 million[5]. Commodore's price war against TI was also taking effect, with reports that some larger discount stores were selling the VIC-20 for as little as $88 (around £200 in 2020) and the 64 at around $300 (£680). Commodore claimed that it was selling 70,000 machines a month[6], which was probably something of an under-estimate as it was later reported that Commodore UK alone had sold 750,000 computers in 1983[7].