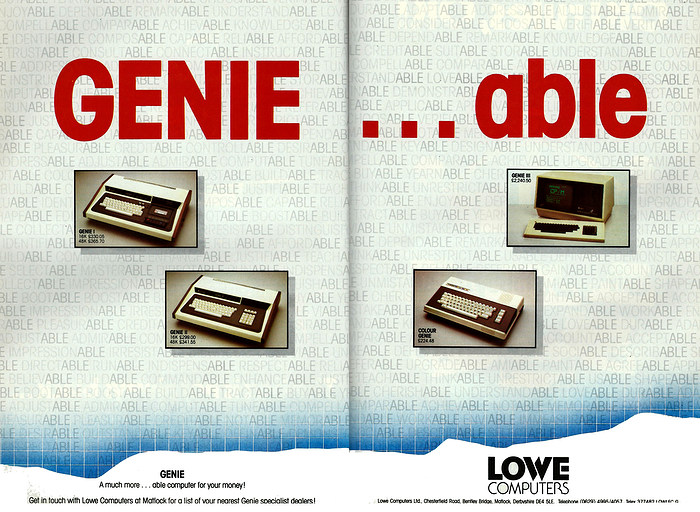 A simple advert from Lowe Computers (formerly Lowe Electronics) - sole importers of the Genie series of computers, built by enigmatic Hong Kong company EACA - which nicely sums up the entire range at the time: the original and massive Genie 1 with integrated tape deck; the Genie II - the same model without the tape deck but with an extra number pad; the Colour Genie and finally the Genie III - ten times the cost of the colour machine, retailing for £2,240, or about £7,720 in 2021.

The Colour Genie had broken with the tradition of the previous models by dropping the Z80 and its TRS-80 compatibility and going with Motorola's 6809 - the same processor as used in the Dragon.

Lowe, based in the Peak District town of Matlock in Derbyshire, had initially wanted to secure sole dealership of the VIC-20, but Commodore were all, like, "no way". The company, famous for its Radio Ham equipment, went with the Genie instead[1].

Unfortunately for Lowe, EACA's Genie also appeared at the top of the table for returned machines published in Personal Computer News in September 1983. The admittedly un-scientific analysis showed that Lowe was seeing a 7.1% returns rate, compared to an average of around 5% for the Cambridge companies (Acorn, Camputers, Jupiter and Sinclair) and under 1% for Commodore and Apple. Many of the Genie failures were credited to pressure on a daughterboard attached to the computer's motherboard. Most other manufacturers seemed pleased with their reliability, with Sinclair keen to point out that around 50% of the machines it had returned to it were not actually faulty. However Ian Williams of Dixons also said "Our impression is that [the rate of returns] is not acceptable yet, but it is improving. Some manufacturers are worse than others". Dixons found that about 15% of the machines returned to it weren't actually faulty[2].

Controversy over reported reliability figures was still raging a couple of years later, although this was no longer a worry for Lowe or the Genie, both of which seem to have long-since departed the market. In a letter written in January 1985, Chris Curry, MD of Acorn, suggested that "The BBC Micro and Electron are the most reliable by far of all the popular micros available". He went on to state that only 3% of Acorn's micros were returned faulty in the first three months, compared to 13% of Commodore 64s, 18% of VIC-20s and a whopping 23% of Sinclair Spectrums. Sinclair took issue with the survery, which appeared in Business Decisions, not least because it had been carried out on behalf of Aspect, Acorn's advertising agency. It was also noted by William Poel, the head of Amsoft - Amstrad's software tentacle - that Amstrad's machines were shown to be equally reliable, despite the added burden of coming complete as a micro-monitor-cassette system, but they had been mysteriously ignored in Curry's letter[3].