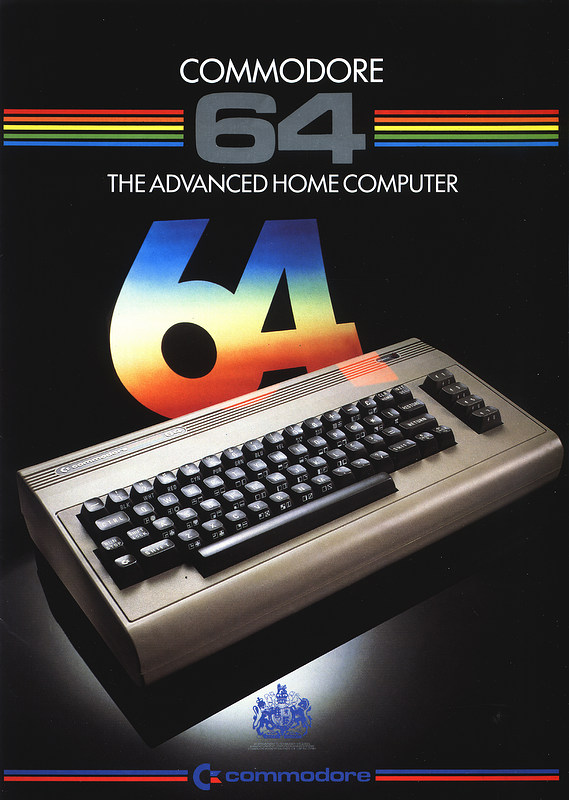 This is a nice 4-page gate-fold sales brochure for the computer that remains the best-selling home computer of all time - the Commodore 64. The brochure, printed for the UK market (note the Royal seal on the front page), features some classic examples of the 1980's nuclear family doing various things like playing games, pretending to be Rodin's "The Thinker" and wearing brown tank-tops. There's also the great line "older children can not only learn to program in ... Assembly language". 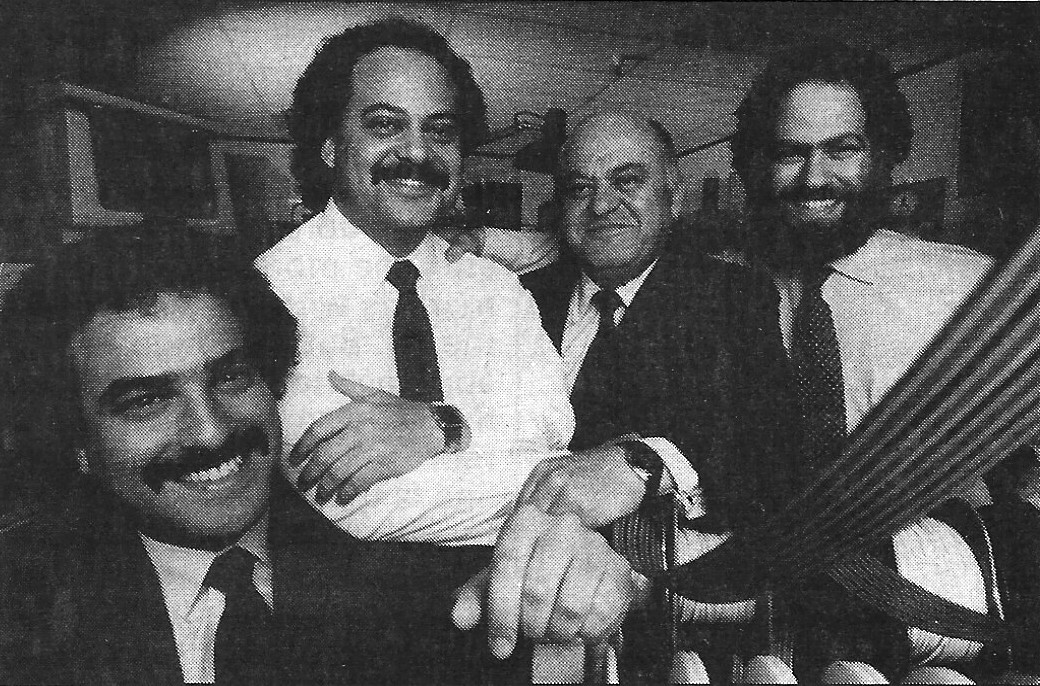 The Tramiel family: Gary, Sam, Jack and Leonard, © Personal Computer World July 1987Earlier in the year it had been reported in the press that Commodore had sold 500,000 64s in the UK alone and had more than doubled sales in the 9 month period to March 31st from $469 million in 1983 to $967 million - about £2.5 billion in 2017 terms. It was shifting over $100 million a month and would become the first computer company ever to exceed $1 billion in annual turnover when it reported its year-end on June 30th[1]. However, just days after these record figures had been first reported, it was announced that Jack Tramiel - founder, president and CEO of Commodore - had "resigned" on January 13th and would be replaced by Marshall F. Smith, president and chief executive of Thyssen-Bornemisza Inc[2]. The story going around had been that Tramiel had wanted to bring his sons Sam, Gary and Leonard in to the company, but long-time financier and chairman-of-the-board Irving Gould objected. Things came to a head at a directors' meeting in New York, where Tramiel walked out half way through and was "on a plane back to California before the meeting was over"[3]. According to Commodore insider Michael Tomczyk, the reason for the coup was that "Irving felt that 'professional management' was needed and he saw Jack’s price-slashing strategy as reckless, even though it left Commodore with more than 60% of the home computing market. He assigned the management of the company to a group of older men in their 50s and 60s who did not understand personal computing"[4], despite the fact that the Tramiel sons were all experienced businessmen, with Sam Tramiel in particular having run Commodore's Far East operations for several years. 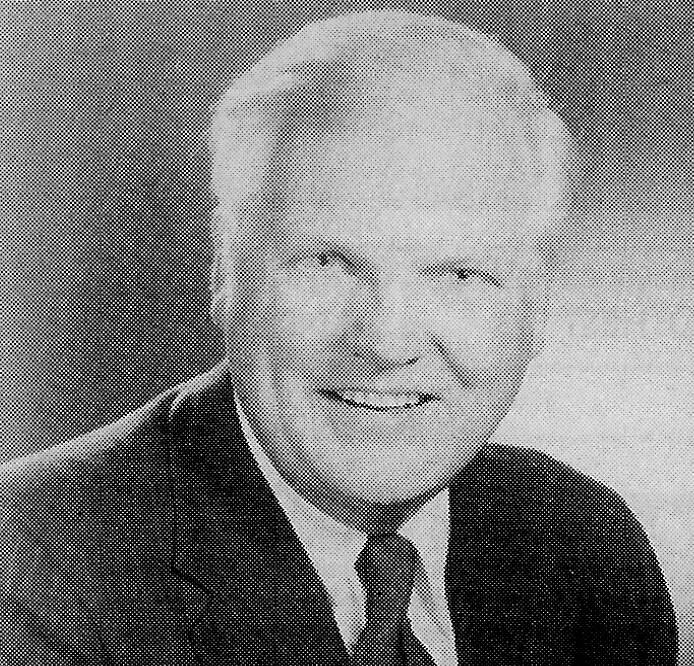 Marshall Smith, © Popular Computing Weekly, March 1984This interpretation conflicted somewhat with the situation as reported in an interview with Smith in August 1985's Commodore User, where it was suggested that Smith moved in cautiously after the loss of the Tramielites and surrounded himself with a young team "Hand-picked from companies like Coca Cola and Apple. In American business terms that's pretty high up the ladder". There was certainly no sense that the "ghost of Jack Tramiel [was still] stalking the corridors of Westchester", Commodore's rambling campus in the Pennsylvania countryside[5], even though rumour was also that Smith wouldn't work at Commodore whilst Tramiel was still there.

The popular story for the reason for Tramiel's departure also conflicted with a talk given by son Leonard at the Commodore Vegas Expo in 2015, where he gave the real reason for the bust-up as being a disagreement over Gould's treatment of Commodore property - like the famous PET Jet - as his own, with Jack saying "you can't do that whilst I'm president", and Gould replying "Goodbye". Shortly afterwards Tramiel and his wife had packed up and were gone[6].

By the late summer of 1984, a whole procession of people had left Commodore with one batch around June of that year including eight top-level people, some of whom resigned and others which were fired. David Ahl of Personal Computer World reported that one departing executive said that "the company would like you to believe that only eight people have left; actually it's more like 15 or 20". Commodore had also lost its VPs of Finance, Manufacturing and Technology and managers in software, marketing and product development. Commodore's new president stated "The internal restructuring that has been implemented has streamlined and tightened up the organisation. Most importantly, these changes have shortened our lines of communication". Although there had been a lot of carnage in the US, Smith was keen to point out that there hadn't been any restructing "in our very strong European company or in US semiconductor operations", or as he otherwise put it "the guts of the company"[7]. 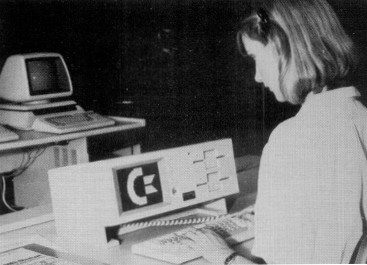 The Bytec Hyperion-based Commodore portable at Hanover, 1984During this tumultuous time, Commodore was also signing deals in the US with Canadian company Bytec-Comtern for the rights to the IBM-compatible tech used in Bytec's machine, the Hyperion, and with Intel to second-source the 8088, which meant it could produce its own IBM-compatible processors - Commodore was relatively unusual in this regard as it controlled the entire "stack" of computer manufacture including 6502 designer and maker MOS Technology and CMOS chip maker Frontier[8]. The machine produced was an odd-looking portable model, looking like a much more angular version of the earlier SX-64 portable but otherwise pretty much like the Hyperion it was based upon[9]. It was demonstrated at 1984's Hanover Fair[10] - Europe's largest and so big there was even a bus service to take visitors around the halls - alongside the two models of the 264 series, the Plus/4 and the C16, together with a Z8000-based businessey Unix machine running the Coherent operating system and which could support two terminals and up to eight "in future stages". Meanwhile, there were plans to produce a desktop version of the new Intel 8008-based "portable PC" which should have enabled Commodore to produce a cheap competitor to the IBM PC, and according to the independent IBM magazine "PC" it could have become IBM's major PC-compatible rival. Commodore's marketing manager, John Baxter, even commented "We have demonstrated our ability to outstrip all competitors in other segments of the market and it's clear that independent observers now see us as poised to repeat that process in the PC sector"[11]. Commodore did produce PC clones right up until 1993[12], including 1985's Commodore PC, but although they were considered as good, all-round machines with the added cachet of the Commodore name, the company never really challenged IBM.

There was some mirth to be had with the press releases that accompanied the launch of the C16 et al at Hanover, which had a certain amount of "lost in translation" as they made their way from German in to English. One release following the donation of 360 Commodore 64s to German schools suggested that "these donations are just welcome to serve as triggers", whilst another suggested that some aids were available to assist in "terminating models" and yet another re-assured readers that Commodore's manuals were all "nonfiction". The best, however, was a press release that addressed the scourge of 1980s micro manufacturers - missed delivery dates - by only claiming that "one of these models will already be available"[13], without saying which one.

The launch of the Hyperion-based Commodore machine followed after a couple of years essentially ignoring the business market - the 8000-series PETs were still ticking along, but the company had burned many bridges with its former business dealers, leaving an army of home-computer dealers that were ill-equipped to handle business sales. Many previous system suppliers had long since dropped Commodore completely or moved over to sell rival ACT's Sirius 1, with Guy Kewney of Personal Computer World suggesting that experience of "promises, delaying tactics and mushroom treatment - kept in the dark and fed BS" had ensured that only a few die-hard followers like Adda or Kobra remained committed to Commodore[14]. At least this time round, given that the Bytec already existed, it was possible that Commodore's promised launch date might actually happen, however - as Kewney pointed out - the machine was "a lovely machine a year ago" but by the time Commodore signed its deal there had already been much wrangling about market rights between Bytec and Anderson-Jacobson, Byetc's retailer Gulfstream had already closed down, IBM had launched its own portable and Compaq had landed with its market-leading IBM compatible portable.