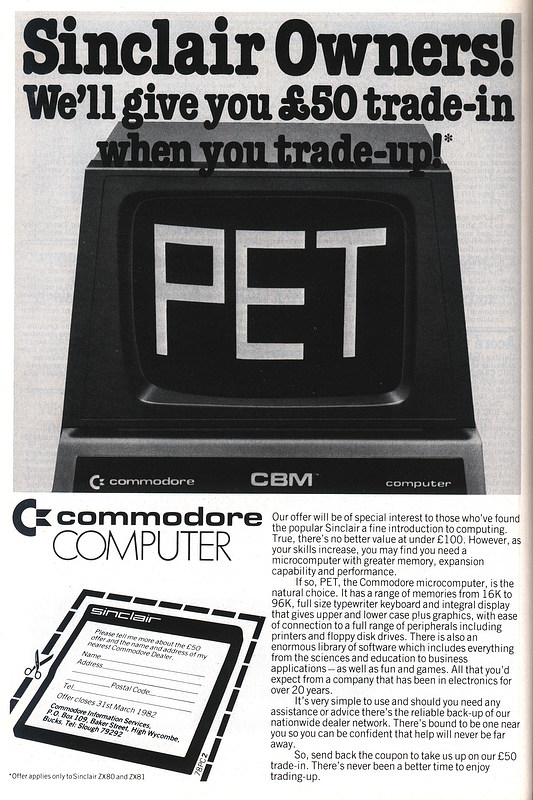 This is a curious attempt from Commodore to woo users of the ZX80 and ZX81 - small, low-memory and purely home computers that plugged into the television and could by held in one hand - to switch to a Commodore PET, the large all-in-one machine that weighed 20 kilos and which was doing fairly well in the business and schools sector but was not exactly a toy. Mind you, a PET was nicer to use with its real keyboard and ample memory and the fact that, unlike the ZX80, the screen didn't blank every time you typed something in. Even so, it might have been though that Commodore would have tried to entice ZX owners on to the VIC-20, launched in the UK only a few months before and which would have been a much more obvious progression, but no. Oh, and the price: under £100 for a ZX81 and around £450 for a PET, after trade-in.

Commodore was apparently not sure what it was going to do with any Sinclair computers that were actually sent in, although the company's Keith Hall suggested that the company would donate them all to charity as long as "we obtain a reasonable number of machines in satisfactory condition". Meanwhile, Sinclair seemed a bit non-plussed, with Clive Sinclair stating that whilst Commodore's scheme was "flattering", it wouldn't do Sinclair any real harm as the two weren't "in direct competition"[1].

A couple of months later, Commodore announced two new VIC machines at the Hannover Fair, the first of which was the re-named Ultimax computer, which was now known as the VIC-10. Expected to launch in September 1982 and sell for a ZX81-targetting £100, the VIC-10 had only 2K memory on board, however it had a VIC-20-beating 40x25-character screen with a hi-res 320x200 mode as well as the same SID chip as would feature in the Commodore 64. Along with the VIC-10 was expected to be the VIC-30, which would have a full VIC-20-like keyboard, unlike the Ultimax's chiclet version, together with 16K RAM, a full BASIC operating system and a bunch of ports. Expected to be launched in January 1983, the '30 had an estimated price of £250[2].