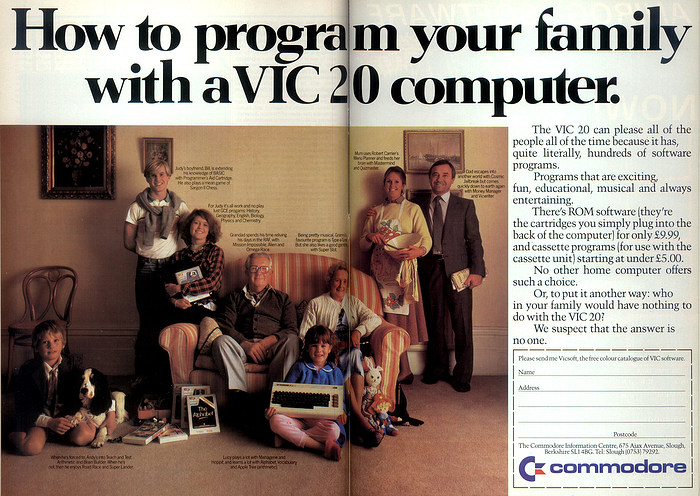 How to program your family with a VIC 20 computer

Despite the fact that the much-superior Commodore/CBM 64 had been around for a couple of years, the VIC-20 was still selling units, and would go on to sell about 2.5 million before being discontinued in 1985. Interviewed in April's "Compute!'s Gazette", VP of Commodore's computer systems division, Myrddin Jones, said "We'll continue to sell it as long as the customer buys it. We think there's a place for a starter computer under a hundred dollars"[1]. The ad itself presents the utterly cliché extended nuclear family of 1984, from sprogs to grandparents, each of which fulfills their expected stereotype - mother thinking of Robert Carrier recipes with a mixing bowl in hand, Grandad reliving his RAF days, and so on. It wasn't really so much about the VIC-20 itself as about the software that supported it. By the end of its production run, some 300 cartridge and 500 tape titles were available for the VIC, which perhaps goes some way to explain why the under-powered machine kept selling, as software had become a key factor in hardware sales - 1983 (the year before) had seen a five-fold increase in sales over 1982[2].

In the run-up to the Christmas 1983 season, Commodore had launched a "determined campaign" to increase its software sales for both the VIC-20 and the 64. Unfortunately, much of the 64 software was re-cycled VIC-20 or even PET games and a lot of it was slated in the press. A review of Maggot Mania concluded that it was a "none-too-inspiring version of an arcade favourite", Jupiter Lander (originally on the VIC) was just "boring", Clowns, which first appeared in 1979 on the PET, was "quite fun but the 64 deserves better than this" and Sea Wolf - apparenty co-developed with famouse arcade company Bally - was simply "apalling". Pete Gerrard, writing in December 1983's Commodore Horizons concluded "one could go on, but why bother? If this is Commodore's attempt to crack the software market, they're in for a lean winter"[3].

Commodore was also expanding its educational and business software as part of the pre-Christmas push with packages like Easy File, Assembler Tutor, Easy Stock and Future Finance. There was even a hint of the forthcoming Magic Desk - "Commodore's software answer to Apple's Lisa". Magic Desk was developed by a team headed by John Feagans, the PET veteran, and was said to be one of the first software packages offered as a response to the Lisa's WIMP. Originally expected to debut in 1983, Magic Desk 1 was held back in the UK pending the arrival of Magic Desk 2 because, as Commodore UK's marketing manager John Baxter explained "[Magic Desk 2] is a better program" - the original version was "not greeted very enthusiastically by Commodore UK", whilst the second version also provided a calculator and home-budgeting software"[4]. 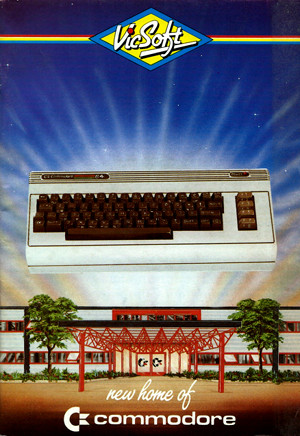 Commodore's 1983 software catalogue - VicSoft - and the entrance to Commodore's new Corby offices and factoryIn the UK, software was down to the software products division in Slough. Headed up by US expat Gail Wellington, who had joined around June 1982, twelve months before Jack Tramiel had appointed Sig Hartmann to sort out the US software department. Tramiel, who stated "we intend to be a major force in the software business", was said to have had an aggressive "kick 'em or kiss 'em" business philosophy. Wellington said of this that "it's not an unreasonable way to run a business", although she did have a sign on her desk that read "if at first you don't succeed, you're fired".

By the end of 1983, the Slough team comprised of 15 people with 30 machines to develop on, although a lot of software shipped wasn't actually written in-house at all - the poorly-reviewed Maggot Mania had actually been written by 16-year-old Jason Perkins. Wellington said "We'll look at anything anybody wants to send us", before adding that "we publish programs that would make teachers cringe - if the graphics are good, the quality of the coding doesn't matter".

Wellington started out as a mechanical engineer in Boston, Massachussetts, for a company that made commercial dish-washing equipment. Following a stint as a technical author, Wellington moved to the UK and, after her daughter decided to start school, applied for a technical author job, not knowing that it was for Commodore. Having got the job, Wellington proposed a reorganisation of the UK's software division after Commodore announced that it was looking for someone to head up the unit. However instead of an outside hire, Commodore decided to let Wellington implement her plan directly saying "Fine - now do it". In June 1982, Wellington embarked upon a campaign to get software houses to write for the up-coming Commodore 64, whilst being careful to position the new machine so that the VIC-20 remained viable in the market. This meant encouraging the development of non-game software, which included buying the word-processor "Easy Script" from British company Precision Software, as well as other British packages like Simon's Basic, Gortek and the Microchips and International Soccer, which Commodore described as "the most amazing piece of software in the world"[5] - British software developers at the time had "an enviable reputation for writing non-arcade software". By 1984, Wellington said "I reckon I have achieved my initial goals for 64 software, but there is still much to do". She continued "We have a vast installed userbase on both the VIC and 64 and people's tastes change. All the time we are having to introduce new titles and retire old ones. As a fashion industry it fluctuates even more than men's neck-ties"[6].

Commodore was also keen to expand the software market by bringing prices down, echoing Tramiel's famous "for the masses, not the classes" mantra. Father-and-son software developers Finsama, the Northern Ireland-based team that developed Future Finance stated that they were "thrilled to death when [Commodore] bought down the cost of software, because it would make it available to more people". The UK's software team played an important role in Commodore's worlwide software efforts, with much of its output being used in the US as well. The US had a major preference for shoot'-em-ups over strategy and these were preferably on cartridge. There were other structural differences between the two markets, most fundamental of which was that cassette sales, which were significant in the UK, were virtually non-existant in the States, where 60% of 64 owners possessed disk drives. The figure for disk ownership was much less in the UK, although it was growing. Wellington concluded that "the UK is small, but our software contribution is large"[7].

As well as the UK, the company was also doing its bit for the Eastern Bloc when it released one of the first games (to appear in the UK) from the growing Hungarian software industry. Dancing Monster appeared at the end of 1983 for the Commodore 64 and was followed by Caesar the Cat, from Mirrorsoft, for the same machine. Both games had been demonstrated at the Hungarian Trade Commission during the middle of November - the first-ever software exhibition to be held by an Eastern-bloc country in the UK - and had been produced by Budapest-based Novotrade, a company backed by the three largest Hungarian banks. Robert Stein, of Andromeda Software and himself Hungarian, explained the interest in Novotrade's software: "Being Hungarian, the games appear refreshingly different". Gail Wellington added "Dancing Monster is very good graphically, particularly in the way the main figure turns". Many other companies such as Virgin, Thorn EMI and Intelligent Software - developers of the Elan/Flan/Enterprise - had been interested in the Hungarian option[8].

Virgin Games had been set up as a subsidiary company of the Virgin record, film and book empire at the beginning of 1983, specialising in games for Commodore's 64 and VIC-20, as well as the Atari, BBC Micro, Dragon, Oric 1, Sinclair Spectrum and the ill-fated Texas TI-99/4A. Virgin managed to poach Nick Alexander to head up the new business - Alexander having masterminded the launch of Thorn-EMI's software tentacle the year before, following a stint as marketing manager of HMV. Alexander said of the launch of Virgin Games that "We will bring new, aggressive, professional marketing and merchandising techniques to an industry that has yet to use them in its growth from the mail-order columns and in to the High Street", where retailers such as WHSmith, John Lewis and Laskys had only recently started selling software for the more popular micros[9]. Meanwhile, the Virgin God-Head himself - Richard Branson - said "In software programming, as with the record business, the UK has more talent than anywhere else - and we will set up an operation to tap that talent. In doing so we intend to take on the American market at its own game"[10].