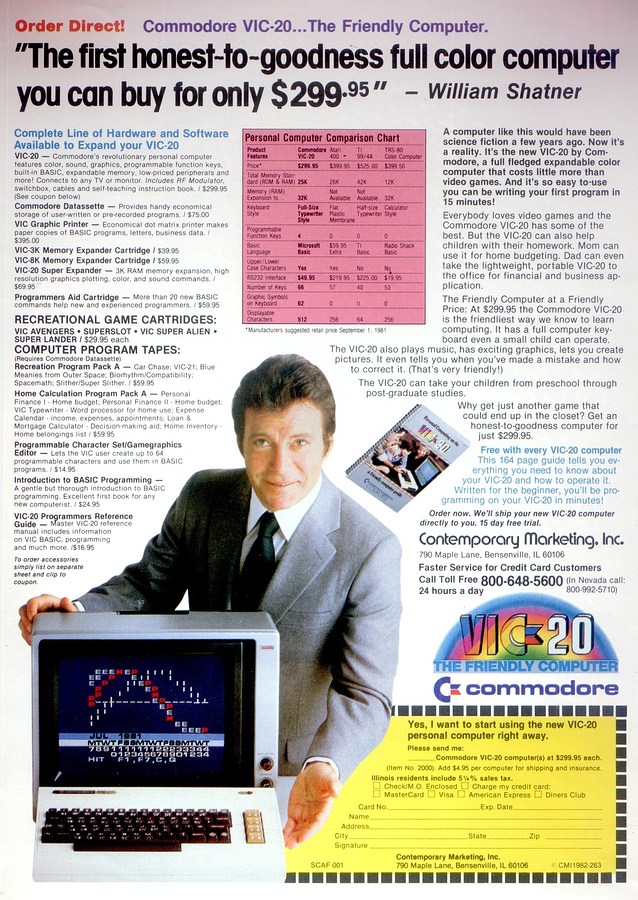 The US counterpart to Ronnie Barker, who had been pressed in to service advertising Commodore PETs in the UK with his trademark punnery and word-play, was none other than William "Captain Kirk" Shatner, seen here introducing the VIC-20 with the folksy phrase "honest-to-goodness". The message of the advert, stressing the "friendliness" of the VIC, was partly a result of Commodore founder Jack Tramiel's insistence on computers "for the masses, not the classes", as well as input from Commodore's recently-hired new marketing strategist Michael Tomczyk. It was Tomczyk who suggested the retail price of $299.95 (about £830 in 2020 money) because that was a price that sounded friendly too. The strategy also involved selling the VIC through high-street retailers rather than potentially-intimidating computer resellers, which helped make the VIC the first computer of any type to sell 1 million units. When Shatner was being shown around the VIC-20 by Tomczyk, it was revealed that it was the first time that the captain of the USS Enterprise had ever used a real computer[1].

Although Commodore arguably created the home computer market in the US with the VIC, through a combination of accessible advertising and direct-to-High-Street sales (annoying Commodore's established dealer network in the process), the idea of selling via regular shops, and not computer dealers, was not without precedent. Ohio Scientific, makers of high-end microcomputers as well as the more budget (but definitely technical) Superboard had experimented with the format back in 1980, when it tried selling its budget range in US department-store chain Montgomery Ward. Sales were poor, largely because the products were still perceived as technical and so only business types came in, and when they did they were asking questions about business applications and software that the washing-machine and hair-dryer-trained sales clerks could not answer[2].