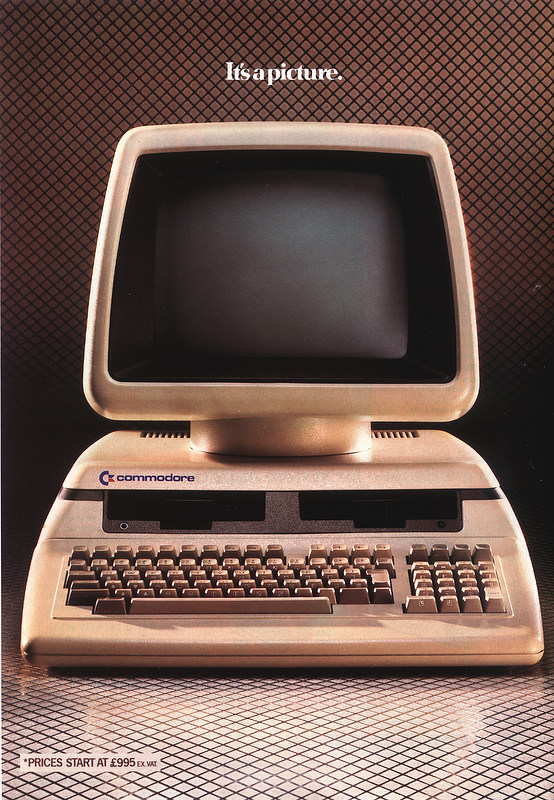 With a case popularly believed to have been designed by Ferdinand Porsche but which was actually designed by Commodore's regular industrial designer Ira Velinsky, an on-board 6509 CPU and an option of a second processor - either a Zilog Z-80 for C/PM, or an Intel 8088 for MS-DOS (this was included as standard on the 720 model[1]) - the 700, known as the "B series" in the US for no fathomable reason other than "B" stood for "Business", certainly looked the part. However, it had to be relaunched several times and was eventually binned in favour of the 8000 series, which had been released before it and which shared the same case design (see here for more on PET history). What's quite interesting about it though is that two years in to the era of the general-purpose IBM PC, it was a machine that still booted in to BASIC - a language still suitable for beginners, but which was looking a bit odd for a business machine.

The 700 shipped with 128K of RAM and the 720 with 256K, but the 700 could take up to 640K externally. This, however, could only be accessed by "bank switching" - addressing individual 64K banks at a time, as 64K was the practical limit an 8-bit processor could handle. This was a process that required special programming techniques. The 700 also apparently had CP/M-86 compatibility with the IBM PC and, interestingly, the Sirius 1/Victor 9000[2] - the latter machine being that which a certain Commodore PET and 6502 designer Chuck Peddle had a big hand in.

Increasing competition in the latter half of 1983 led to something of a price war, and Commodore was quick to cut the prices of its machines across the board. The 700 series was clipped by 18% down to £650 (£2,240 in 2021 money), whilst the older 32K 4032 model (one of the "classic" PET models) had £200 lopped off the price, a near 30% price cut. There was even suggestion in the trade press that price cuts were starting to make the C64 interesting as a small business machine, where a system combining the 64 with a 2MB disk unit and a decent dot-matrix printer could be had for £1,500 (£5,170)[3]. Mike Tait, Commodore's national sales manager was quoted as saying "With the reduced prices, Commodore is even more strongly positioned to further expand its established user base of over 110,000 business installations in the UK".

Around March 1983, the first hints started appearing of a possible move of European production and distribution from the existing Braunschweig factory in West Germany to Corby - an area of the UK with high unemployment, and thus a guaranteed supply of labour, rent-free deals and generous grants from the Department of Industry. The logic behind this move was that the UK was already accounting for 40% of Commodore's entire European sales in home computers, so production of the VIC-20 and the 64 would move[4], giving Braunschweig four times its existing capacity to manufacture the model 500 and 700 business machines[5]. Corby was expected to create 200 jobs and produce 700,000 units a year. The home computer market in the UK in early 1983 had reached a penetration of just under 1 million households, with the figure expected to double by the end of 1985, according to a survey commissioned by Gowling Market Services and conducted by the British Market Research Bureau. The survey also revealed that 45% of home computer users were 18 or under and, unsurprisingly, arcade games were the most popular application, although 25% of households did use their machines for educational purposes[6].