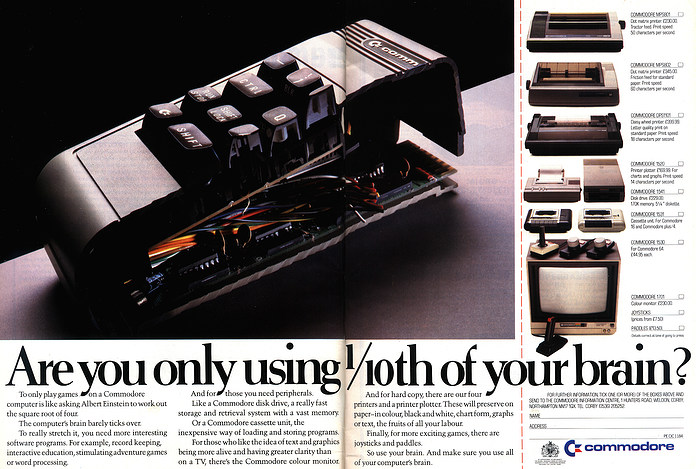 Another UK advert for the Commodore 64, extoling the virtues of more software and peripherals like printers, joysticks and colour monitors. Somewhat disingensouly, it suggests that only using your 64 to play games is giving it nothing to do, whereas games have pretty much always defined just how well a computer can perform at its limits. Still, it's a nice advert and it sacrificed an entire (hopefully non-working) C64 for its art. 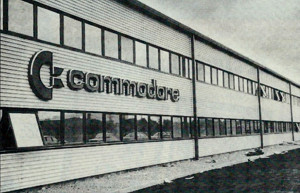 Commodore's Corby, UK, HQ and factory. © Commodore Horizons March 1986At around this time, Commodore UK was negotiating with the European Coal and Steel community to fund expansion at its Corby factory. The £20 million HQ in Northamptonshire, originally announced around May 1983, was built with the assistance of UK Government grants and housed marketing, sales and administration functions as well as an assembly line. Only eight months after the announcement, the factory - a centre for European production and one of four such sites worldwide - was turning out 5,000 VIC-20s and C64s a day[1]. A Commodore spokesman stated that UK retail sales had exceeded that of the company's closest rivals - Sinclair - both in terms of revenue (which had been the case for a while) and units, whilst in the US it commanded 43% of the under-$1,000 market, with Sinclair (Timex) managing just 9%[2].

Commodore closed the Corby assembly line only two years later with the loss of 250 jobs as it increasingly struggled in the market, racking up a $113 million loss in the year ending June 1985. However it retained 170 jobs as the building remained a centre for sales, admin and servicing. The President of Commodore International Limited, Thomas Rattigan, stated that "to meet the challenge of the next two to three years, Commodore would be concentrating on fewer plants using higher technology". The closure of Corby meant that all Commodore machines sold in the UK would now be built elsewhere in Europe or in the US[3].

One interesting example of how more than 1/10th of the 64's brain was being used in a commercial setting was over at Chivers Hartley, the jam-making subsidiary of Cadbury-Schweppes, at its factory in Histon, near Cambridge[4]. In order to comply with newly-introduced average weights legislation, the company was looking in to automating the weighing of filled jam jars, but didn't want to use the expensive on-site IBM mainframe. Instead, based upon experience at the group's Summerdale factory where Commodore PETs were being used in a similar role, Chivers' Ian Millard, responsible for packaging, and Ian Bramford, resident IT expert, wrote a system on the 64 in just three months. The software was capable of weighing jars before and after filling and storing up to 17 days' data on one side of a floppy disk, as well as producing a police siren warning if jars were running under weight. However, this particular feature had to be removed following complaints from "the girls in charge of quantity control". The accuracy of the system meant that the 0.5-gram over-filling allowance could be removed, saving tons of jam per year and thousands of pounds through efficiency savings. The whole system cost £1,000 - a price that Chivers expected to recover in only three weeks[5].

Elsewhere, Commodore had recently announced the winners of its "Commodore International Computer Art Challenge", organised back in April, by exhibiting the winning entries at a Mayfair art gallery. The overall winner was unemployed Fine Arts graduate Hugh Riley from Manchester with a work entitled "Louis (Meditation Failure 126)". In addition to winning £1,500-worth of Commodore equipment, Riley was also awarded an endowment of £5,000 (£16,400 in 2020) in order to study computer art at a location of his choosing. He said "I'll probably go to America". The original competition had been arranged to coincide with the release of the legendary Tony Hart and now-disgraced Rolf Harris drawing applications for the Commodore 64, however neither of the two software packages had been released even by the time the competition had finished[6]. The company seemed to be investing heavily in competitions as a method of promotion, as it also announced it was sponsoring the first European heat of the International Programming Competition, held at Thames Polytechnic on the 20th October, as part of its "commitment to backing British education". Commodore provided a bunch of 8000-series PETs upon which the "brainstorming sessions" were to take place[7]. This was all part of a wider attempt to increase market share in higher education, since the primary sector had been sewn up by Acorn's BBC Micro, although the contract for the "BBC Micro" had come up for grabs in the summer of 1984.

The attempt to break in to the schools computer market continued at the end of 1984 when Commodore announced it was to sponsor the up-coming 1985 British Computer Society Schools Computer Quiz. The total sponsorhip amounted to £50,000 (£164,700 in 2020) with £12,000 of prizes for the schools taking part. At the same time, those participating schools would be elligible for a loan of two Commodore 64 systems for three months. If, at the end of the loan, the school wanted to buy its loaned machines, Commodore would add £3 for every £7 raised[8].

By 1986, one of the most successful areas on Commodore's on-line service Compunet was its Art Gallery section, where anyone could upload digital artwork, animations or audio creations. Compunet's editor Jane Firbank also ran competitions from time to time to encourage participation, and at any one time there could be upwards of 40 artists displaying content. One of the most popular artists was none other than former competition winner Hugh Riley, who said "Compunet alway fully encouraged me right from the beginning. It paid for my first screens, for a start, putting them in its free Hall of Fame pages, which encouraged me to create more pictures for it". Riley also produced some animated work which caught the eye of Commodore UK in Corby, which then provided Riley with software to create a series of animations for the Amiga to feature heavily at the machine's UK launch at the Commodore Computer show in May. Other arists like Bob Stevenson and Stu Jackson were also benefitting from on-line exposure, with the former going on to design graphics for the software house Firebird, and the latter providing loading screens for Virgin[9].