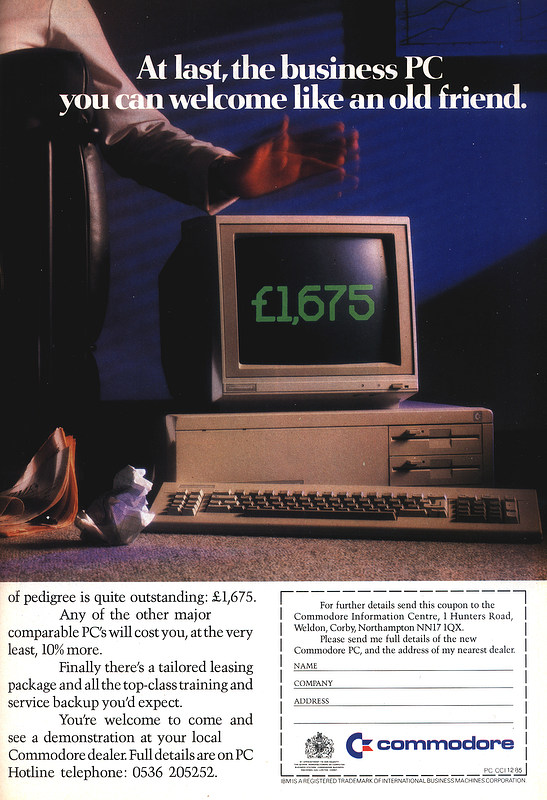 At last, the business PC you can welcome like an old friend

Not to be left out in the stampede for IBM PCs and their compatible ilk (it's 3 years since the IBM PC launched), comes this offering from Commodore for its version. The ad contains some of Commodore's notable achievements: the first microcomputer company to make $1 billion turnover, and the UK's most successful microcomputer in the form of the PET, which in its heyday had achieved something like an 80% market share. This particular machine came with 256K memory, a 12" screen and a 5.25" floppy drive and retailed for £1,675, or around £5,250 in 2020 terms.

However, all was not rosy in the Commodore world. The month before, the company had announced a total loss for the financial year ending June 30th 1985 of $114 million, or around £90 million at the time (£280 million now). That was a significant reversal from the $144 million profit the year before. Irving Gould, chairman of Commodore International Limited, said "Earnings during the fourth quarter were negatively impacted by promotional deals and lower sales" before adding that the company expected an upturn in fortunes before Christmas, mostly because it had finally started shipping its C128 and Amiga models. A UK Commodore spokesman followed up by saying "Since the time covered by the figures, Commodore UK has brought in measures to improve the UK performance. Also there are products like the Commodore PC and the bundled packages which are on sale in Europe only and [which are] doing quite well"[1].

Commodore's miserable performance continued through to the end of 1985, when it reported that losses up to September had been $39.2 million, or about £30 million (£94 million in 2020). These figures were even worse than expected, although Irving Gould was still expecting - perhaps optimistically - a return to profit by the end of the year. Costs of developing the upcoming Amiga and C128 were blamed for the rubbish results[2].