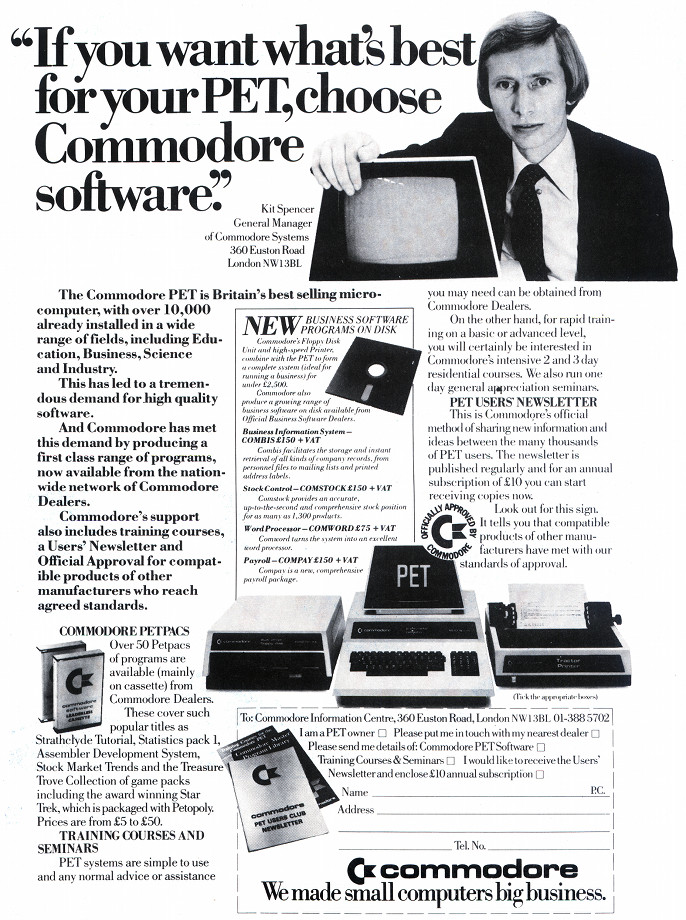 "If you want what's best for your PET, choose Commodore software"

An advert for Commodore's own software tentacle, which was placed in many Commodore magazines of the day and which ran for at least six months. It features the legendary Kit Spencer, Commodore UK's top sales executive and the man credited with defining Commodore's highly successful marketing campaign in the UK. This made Commodore one of the most successful of the early computer companies, both in the UK and Europe and in turn made Commodore UK one of the jewels of the entire Commodore empire, with the company at one point owning 80% of the UK market. 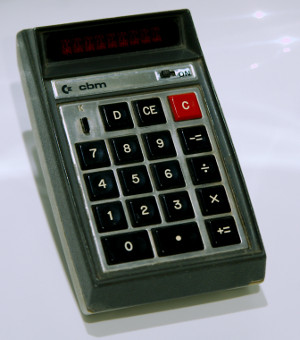 My own 1972 Commodore C110 - the re-badged Bowmar 901B was Commodore's first calculator and was launched at the end of 1971Christopher "Kit" Spencer, looking not unlike Michael York in "Logan's Run", had been recruited by Jack Tramiel from Bowmar, the calculator company[1]. Bowmar had built the first pocket calculator in the US - the 901B - which was also sold to Commodore and re-badged to become the CBM C110, becoming Commodore's first calculator. At £79 - that's £1,090 in 2020 - it was still the cheapest calculator in the UK[2]. Considered as the best Commodore marketing executive, Spencer's success saw him first shipped over to Switzerland to become VP International Marketing and then to the US, along with fellow Brit Bob Gleadow, just a few months later in the summer of 1980. There was even a possibility that they would become vice presidents of Commodore, at least according to Dick Sanford.

The reason for the promotion was straightforward. Despite being first to market in the US, Commodore had slipped to third place behind Tandy and Apple in its home market. In the UK, on the other hand, Commodore held the number one spot. One reason for this, given by Sanford, was "revolving door syndrome", where Silicon Valley culture meant that executives would switch jobs from one company to another at the drop of a hat, never having time to fully get to understand the company they were working for. Kit Spencer however was by now a Commodore veteran and was very much part of Jack Tramiel's inner circle. Another was simply that Commodore had rarely done any of its own marketing in the States, choosing to leave it to its dealers and whatever sporadic advertising campaigns they came up with, whereas in the UK whilst dealers would also contribute to marketing, Commodore UK - and Kit Spencer - would coordinate it all[3], and it was prolific in its advertising output.

Meanwhile, part of the marketing re-shuffle that saw Spencer and Gleadow move to the states also involved a move of much of Commodore US back to Valley Forge near Norristown, Pennsylvania, where MOS Technology - the 6502 chip manufacture that Commodore bought in 1976 - was based. This included Michael Tomczyk, who would become product evangelist for the VIC-20 in the face of much opposition from within Commodore, not least from Chuck Peddle. 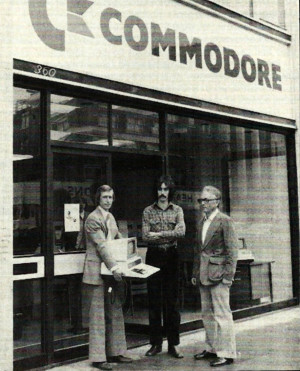 Kit Spencer (holding the PET) outside the official Commodore showroom at 360 Euston Road, London, © Personal Computer World August 197815 months after Spencer's move to the US, the appointment of Bob Lane as head of North American operations saw further management change and something of a clear-out of old-guard "Commodorians". Kit Spencer had a word with Jack Tramiel and got moved to the Bahamas, where Commodore International Limited was officially based, to edit magazines and troubleshoot marketing[4].

Bowmar, Spencer's previous company, had been a casualty of the Calculator Wars of the mid-1970s, which had been triggered by Texas Instruments' entry in to the market. TI's vertical integration meant that it could sell whole calculators for less than the cost of the parts it sold to other companies. Bowmar didn't adapt to TI's $49 calculator and continued to sell its own at $500. It went bankrupt shortly afterwards, but Commodore survived the market turmoil and the brutal lesson on the merits of vertical integration was not lost on Jack Tramiel, who went on to buy one of Commodore's chip suppliers - MOS Technology - in order to give Commodore some of the vertical integration that TI had benefitted from so successfully.

Birth of a Software Industry

Whilst there were many third-party companies writing software for computers of the day, the modern software industry was only just getting off the ground and so many computer companies would also write lots of their own titles in order to ensure that software was available for their platform. Kit Spencer made this happen for Commodore by initially marketing the PET at hobbyists, and getting them to write software for non-hobbyists, building up a catalogue of software within a matter of months[5].

One of the first software packages that would influence the sale of a particular computer rather than the other way round was also launched this year: Visicalc[6] was the program that saved the Apple II, even though according to Brian Bagnall's Book "On The Edge"[7], it would have been written for the PET first except that the PETs at the lab where it was developed were busy. Dan Bricklin, co-author of Visicalc, alluded to the fact in an interview that they could have equally written it for the TRS-80 or the PET[8]. Although the software industry was still in its infancy, there was already a realisation that software was on its way to becoming at least as, if not more, important than the hardware it ran on. Bill Gates of Microsoft had already coined the phrase "software defines the product" back in 1980, which replaced the adage "software sells hardware". This was at a time when Microsoft had just opened its own Consumer Products division[9].

Before Visicalc promoted the Apple II to the status of "must-have" machine, rescuing Apple's fortunes in the process, Commodore's PET was recognised as Britain's most popular personal computer[10], although market research published a few months earlier at the end of 1979 showed that of the 40,000 microcomputers sold in the UK, 20% were Commodore, 20% were Apple and ITT combined and 10% were Tandy[11].

The relative popularity of the PET may have been partly because Commodore was actually assembling the machines in the UK, unlike Apple, and so its machines were cheaper. The starting price for an Apple II in the UK at the end of 1979 was around £850, with a monitor or TV taking that to around £1,000 - around £5,600 in 2020. Commodore's price for the equivalent 16K PET was only £600 (£3,360), a discrepancy greater than the US price difference between the two machines would suggest. Eurapple's president, André Souson disagreed with this in an interview with David Hebditch, brazenly claiming that the company was "not selling the same Apple in countries with PAL or SECAM [television standards] or 220 Volts" and that the extra cost of a 625-line-capable graphics card and power supply justified the 25-30% price difference between US and European dealers. Meanwhile, Commodore had recently moved its PET factory from Eaglescliffe in Stockton-on-Tees to Slough[12], where it remained until the opening of its Corby factory and headquarters in the latter half of 1983[13].

Kit Spencer went on to mastermind the marketing and launch of the Commodore 64 in the US, but after an intense year or so decided to look for a change. Rather than lose him, Jack Tramiel offered Spencer a job at Commodore International's Nassau headquarters, after the parent company moved from Canada to the Bahamas for tax reasons. By the time he was 40 Spencer had cashed in his Commodore stock and retired, but remained in the Bahamas as president of the island's National Tennis Association[14].