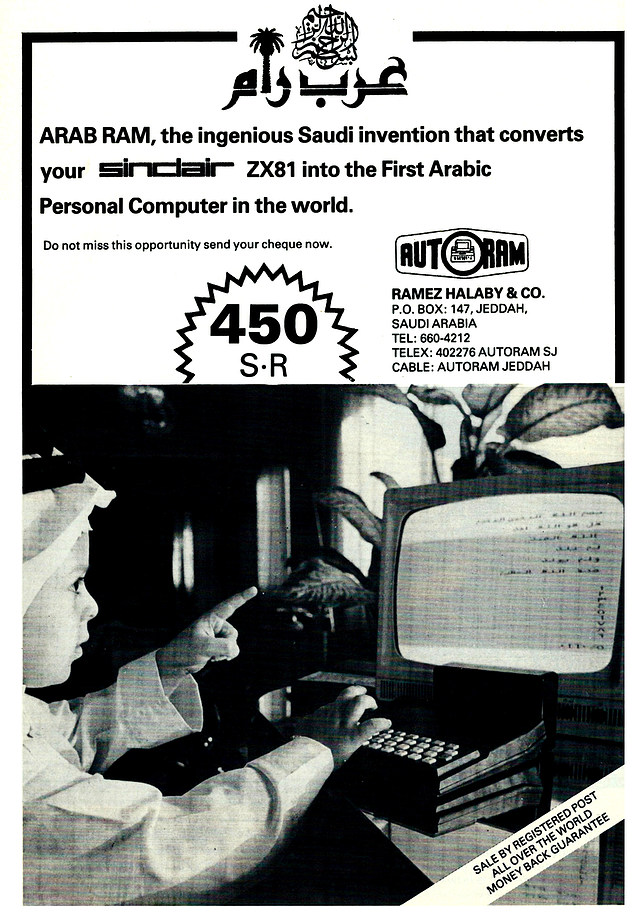 The first Arabic personal computer in the world

An interesting random advert for what was billed as the first ever Arabic personal computer in the world - a modified version of Sinclair's ZX81. In an era when English-derived programming languages - especially BASIC which made much of the fact that it was a bit more like real English than, say, Pascal - may have seemed like a new wave of cultural imperialism, such localisation was rare, although Acorn's BBC Micro would be adapted for Hebrew use, becoming popular in Israeli schools and had would even be used to cover the Israeli elections later this year[1].

There wasn't much information on the product apart from this advert, which frustated Personal Computer World's Guy Kewney who wrote "Obviously it isn't easy to learn to program if you have to learn English first, so for Arabic-speaking people this must be one of the nicest breakthroughs of the year"[2]. It was available from Autoram, a company established by Ramez M al-Halaby of Jeddah, for the price of 450 Saudi Riyals. With an exchange rate of 17p to 1 SR, that's about £250 in 2021 money.

Sinclair itself had been due to float on the stock exchange on March 12th 1984, but with the winding-up of Oric, the collapse of former Sinclair distributor, modem and Wren Micro maker Prism and the financial chaos raging at Acorn, it was said that Sinclair financial advisers "took him to one side and told him that the City was not in the right mood for a microcomputer company's shares". Being forced to choose another time to float and bring in much-needed capital was clearly a blow, given the many projects Sinclair had going on[3].

Sales of the ZX81 had been flagging, perhaps not surprisingly, since the Spectrum had been released back in 1982, so Sinclair had tried a Commodore move in the late summer of 1983 by offering the ZX81 as a bundle. Slightly different to Commodore's VIC-20 bundle, which included the VIC, a tape "datasette" recorder and a bunch of software, Sinclair's offering came with the ZX81, a 16K RAM pack and one software cassette, all for £45 - a saving of £30 if the three items were purchased separately. It was not mentioned whether the bundle also came with the legendary blob of Blu-tac required to keep the memory module in place, but the price drop was triggered because the earlier price reduction of the ZX81 by itself to £40 had done little to encourage sales[4].