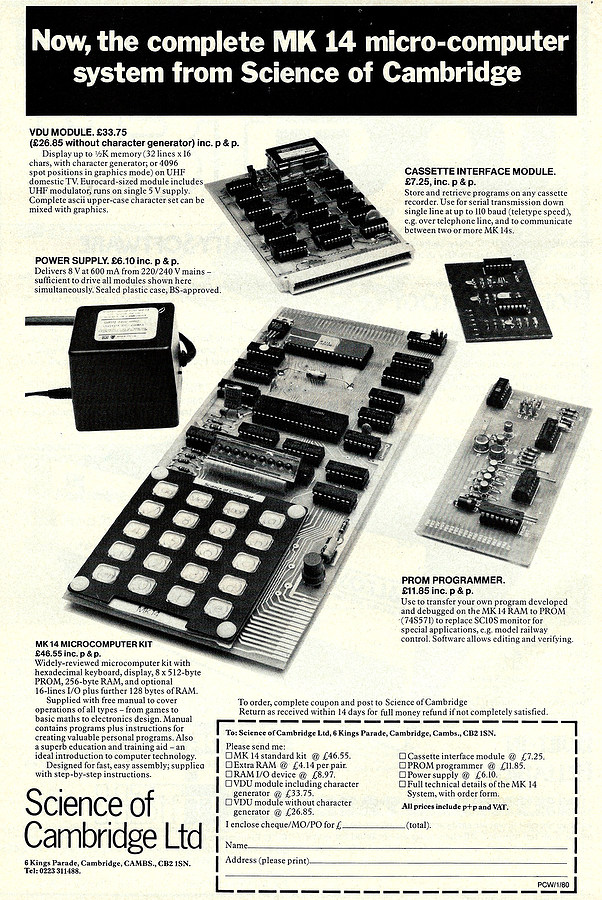 Now, the complete MK 14 micro-computer system from Science of Cambridge

Right on the cusp of the launch of the ZX80, Science of Cambridge was still selling its MK14, which had been launched back in the summer of 1978. The price was still broadly comparable, at £46 (around £220 in 2021) but the MK14 now had a raft of official Sinclair add-ons to go with it, including a video display module for almost the same as the MK14 itself - £26.85, along with a cassette interface module at £7.25. The design of the MK14 appears to also be in its (at least) third distinct revision.

The tiny one-board computer appeared tricky to assemble, with about 90% of reported failures down to dodgy soldering and most of the rest down to chips inserted the wrong way round. Guy Inchbald, writing in December 1979's Practical Computing provided several recommendations, including one to solder IC sockets on the the board, rather than soldering the chips directly (as heating the legs up too much could lead to "heat death") and to add a bigger smoothing capacitor plus a larger power supply. Overheating was also a problem, with the on-board regulator cutting out, especially if the nominal load of 500mA was exceeded. Solutions to this included heat sinks and limiting 4.7ohm resistors[1].