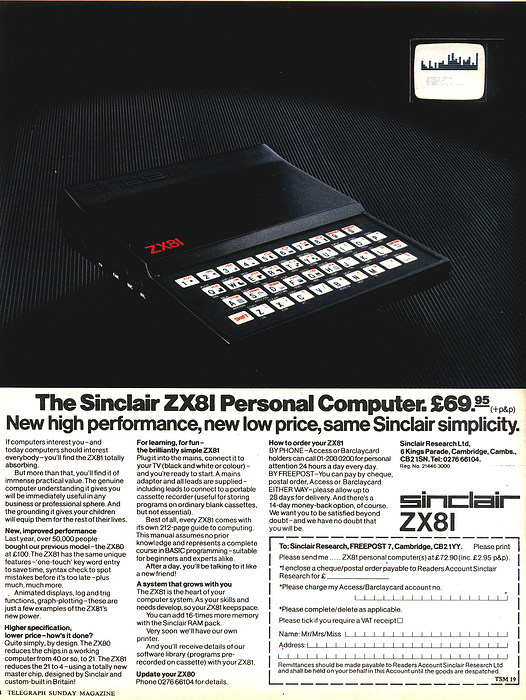 Here's another advert for the Sinclair ZX81 - the computer that sold more than 1.5 million units and which almost single-handedly started the computer revolution in the UK. In common with several of Sinclair's adverts for this machine, it's mostly in black. The basic unit provided 1K memory and made much of Sinclair's economies of design: the price of £70 (£290 in 2020) was much less than other computers of the day, where even the VIC-20 was selling for £199 (£830). This was largely achieved by reducing the chip count to only 4, primarily by using a large "Uncommitted Logic Array" chip made by Ferranti which included most of the machine's functionality. Other less-well-engineered features include the "blu-tack" method for making sure that the optional 16K expansion packs didn't fall out of their socket whilst in use.

The ZX81 used regular tape recorders for storage, unlike the Commodore PET and VIC-20 which had dedicated "datasette" recorders, but Sinclair owners were plagued with problems in saving and loading programs. Suggestions in computer magazines included only using "official" computer C-12 or C-15 tapes, fiddling with the volume on the player, making sure the computer's power supply was nowhere near the the tape and even wet-cleaning the tape heads for every load[1].

The ZX81's follow-up, the Spectrum, was the machine that might have been the "BBC Micro", if Sinclair had got his way when that contract came up for grabs. The Newbury NewBrain had secured the original deal, but increasing delays and a seeming inability to meet the requirements of the contract meant that the tender was widened out to, amongst others, Dragon, Oric, Sinclair and Acorn. Although Sinclair already had a proven ability to produce in quantity over Acorn, with the former managing to churn out 10,000 units per month whilst Acorn couldn't even satisfy potential demand with their 2,000 a month output, the specification meant that the Acorn was simply better suited[2], in particular because Sinclair was said to have been unwilling to adapt to fit. Sinclair never saw it that way and remained bitter for years that his company had lost out to Acorn - not least as Acorn had been started by his former confidant and right-hand-man Chris Curry. The one thing the Proton never did was satisfy the requirements on price, which stipulated £200 or less. Whilst the ZX81 was selling for £70, the BBC Micro started at £200 but quickly went up to £400, where it stayed for years, completely oblivious to the raging price wars that occured elsewhere.